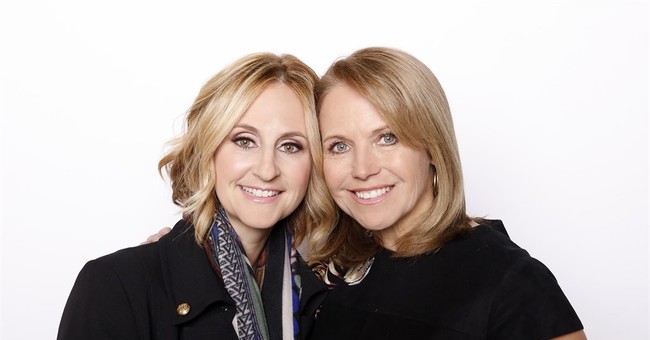 While Katie Couric said she took  "responsibility” for misrepresenting her interview with members of the Virginia Citizens Defense League in her film Under The Gun, which delves into the issue of gun control, director Stephanie Soechtig is not. Her initial statement offered when it was discovered that the film crew had deceptively edited the interview with eight-seconds of silence. Couric had asked a question regarding background checks to members of the VCDL, who began answering in earnest. The film only shows them with blank faces. National Public Radio described the act as “manipulation.” The Washington Post said that Soechtig’s statement was “weaselly,” and that re-edits, apologies, and a retraction (any of those things) were in order. Soechtig has said the pause was given for viewers to ponder Couric’s question.

Now, we have Soechtig telling Variety that she doesn’t regret editing the interview [emphasis mine]:

Katie Couric said on Monday that the eight-second pause the had been edited into the scene with the VCDL members did not “accurately represent” their response. Do you agree with that assessment?

The focus on this exchange shouldn’t overshadow the fact that the film gave the VCDL a platform to express their views and opinion. It’s really important to keep in mind that this is a group that thinks domestic abusers should have guns and that guns should be allowed in schools and bars. If I wanted to make them look bad, I would have focused exclusively on their radical ideology. But I didn’t do that. I wanted to allow them an opportunity to explain their beliefs. In hindsight, had I known that the NRA would focus on eight seconds of a two-hour film, I might have done things differently. But I made the creative decision and I stand by it.

What was your intention with inserting that pause?

You have Katie asking the group this question, “Do you think people on the terror watch list should be allowed to own guns?” Katie’s asking the question of the group, but as the filmmaker, I want to ask the question of the audience. So what I was thinking, my editor was thinking was we need to stop for a second, because the film moves along at a really fast clip. So you’ll see that throughout we’ll stop down after something happens or when we present something. The terror watch list is a real pivotal feature in the film, as is the whole notion of background checks. So this felt like a really crucial time to stop down and allow the audience a moment to let that question sink in.

Were you surprised to see this moment in the film singled out?

No, if they didn’t find this, they would have found something else. Honestly, I think it’s interesting that they’re focusing on what’s not in the film instead of what is in the film, because if they focused on what is in the film, it would threaten their livelihood. This is very textbook gun-lobby intimidation tactics, and I won’t be intimidated.

First of all, the VCDL doesn’t want domestic abusers to have guns. News bulletin: no gun owners or Second Amendment supporter thinks domestic abusers should have firearms, and it’s already federal law that those convicted of domestic abuse (Lautenberg Amendment) can’t own firearms. Hence, why the protection order provision of the Virginia concealed carry reciprocity deal that was signed by Democratic Gov. Terry McAuliffe in February, wasn’t opposed by the VCDL—it merely made state law what is already federal law.

Second, this isn’t “intimidation.” It’s feedback. You got caught red-handed, and are now throwing a temper-tantrum. It’s one thing if only pro-gun conservatives were calling you out, but it isn’t. It’s The Washington Post, National Public Radio, and the Huffington Post. Yeah, I forgot about that one—and HuffPo was equally perplexed by the eight-second pause if the intention was to hear arguments on Second Amendment issues from both sides, which then followed by silencing the other side:

So, let me get this straight. The filmmakers actively sought out a “range of views.” Then they actively decided, for whatever reason, that it might be nice for viewers “to have a moment to consider this important question.” And then, I guess the documentarians’ cameras and editing bay became self-aware somehow, seizing control of the production and fashioning a false moment from this exchange. Soechtig, suddenly and strangely suggesting that she has only intermittent agency over her own creation, says that she “never intended to make anyone look bad.” Sure hope she’s able to finger the real culprit, then!

This shift, between active and passive, is proof enough that the documentarians failed to meet the toughness standard. But here is where I’m puzzled: Why did the filmmakers seek out these people’s opinions if they never intended to include them? There are a multitude of ways to present the idea that the “gun debate” has been “fierce and the progress slow.” These filmmakers chose to take their argument to the Virginia Citizens Defense League. It was their decision to get into the arena. And then it was their decision to erase the competition that they had enjoined.

The end result here is a documentary that does a great disservice to its audience, arming viewers with the false assurance that a tough question didn’t receive an answer, when in fact it did. This film’s audience has been denied the opportunity to wrestle with those answers — a promise the film explicitly makes when it shows Couric engaging with the members of the Virginia Citizens Defense League in the first place. The filmmakers’ weaknesses have been thus passed along to their viewers.

If you invite an argument, contend with the argument. The end.

And that Ms. Soechtig is why no one cares about the content of the film now because it’s tainted. It’s not the film that threatens the Second Amendment; it’s members of the media, like you, who decide to launch some half-baked crusade against the oldest civil right in the history of our country. When you selectively edited to make gun owners look like morons, when in fact, that wasn’t the case is bias that’s inexcusable.

Granted, it’s fine to be biased. The Guardian is a lefty newspaper, which has a great international section by the way, and I read it because a) they sometimes cover stories that aren’t being covered in the U.S. press and b) I know what I’m getting when I read it. I know I’m going to get the unabashed progressive view on the issues. They don’t try to hide that.

For Under The Gun, this whole fiasco could’ve been avoided if they didn’t give off the veneer that they were trying to get both sides of the story when in fact, that wasn’t the case. At the same time, if it was an Everytown-esque picture no one would watch it.