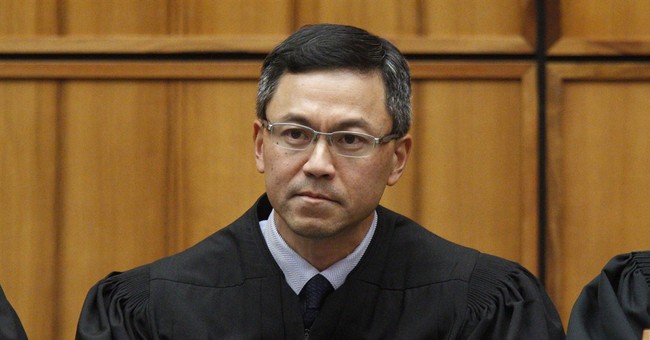 On March 15, U.S. District Court Judge Derrick Watson in Hawaii issued a temporary restraining order on President Donald Trump’s revised executive order on immigration. Katie has the details here. Four other deep-blue states, Minnesota, New York, Washington, and Oregon, has also signaled their intention to fight the new order, noting that it’s too similar to the original order that they feel is unconstitutional. In Washington, Attorney General Bob Ferguson wants to extend the injunction he got for the first order and extend it to the recent one issued by the Trump White House. Well, Judge Watson seems to have granted that motion, though Ferguson was not part of the proceedings. Hawaii’s own attorney general filed a motion for a preliminary injunction: (via NBC News):

A federal judge in Hawaii on Wednesday extended his previous ruling blocking President Donald Trump's so-called "travel ban" would have restricted entry to the United States by refugees and people from some predominantly Muslim countries.

District Judge Derrick Watson granted a motion by the state to turn his temporary restraining order blocking Trump's revised executive order into a preliminary injunction, extending the ban on enforcement while the case moves forward.

Trump's executive orders restricting entry to the United States of nationals from several predominantly Muslim countries has been criticized as effectively a "Muslim ban," something Trump has denied.

Trump has said the orders were necessary to protect Americans from terrorism and campaigned on a pledge for "extreme vetting" of foreigners seeking to enter the country.

"We do not fault President Trump for being politically incorrect. We fault him for being constitutionally incorrect," Hawaii Attorney General Doug Chin said in his opening arguments to the court Wednesday, according to NBC affiliate Hawaii News Now.

And the lawfare over this action continues.