Reports: President-Elect Trump To Issue Executive Orders That Will Help Roll Back Obamacare On Day One 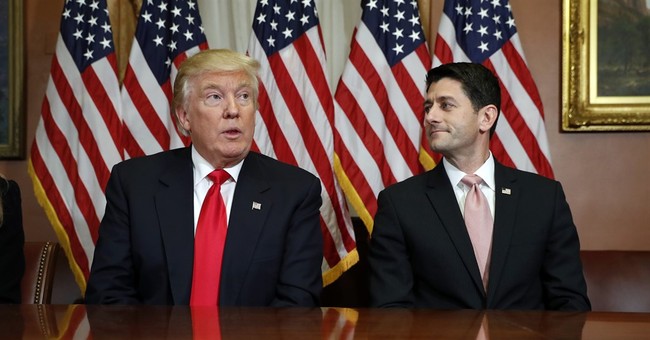 As Cortney wrote earlier this morning, Vice President-elect Mike Pence is on Capitol Hill to rally the troops for an Obamacare repeal strategy, along with an agenda aimed at job creation and rolling back regulations. The Hill is reporting that House Republicans have a target date for the Obamacare repeal bill: February 20. Pence also said that the incoming Trump White House would issue executive orders to roll back President Obama’s health care law on day one. President-elect Donald Trump’s press secretary, Sean Spicer, said that Mr. Trump considers the inauguration “Day One.” Yet, in typical Trump fashion, the specifics were lacking (via The Hill):

House Republicans are planning to get an ObamaCare repeal bill on President-elect Trump's desk by Feb. 20, while the administration moves forward with executive actions to start unwinding ObamaCare on day one.

Pence said Trump plans to take executive actions to start unwinding ObamaCare on day one, but did not get into specifics.

Rep. Chris Collins (R-N.Y.), an early Trump supporter, added that, "The president in his first day in office is going to do some level of executive orders related to ObamaCare."

But Collins said there were "no details whatsoever" on the orders discussed in the meeting.

Congressional Republicans are going to do something about Obamacare as promised. That’s the point. That was never in doubt, though the debate among those on the Right is how to do it. There’s talk of a three-year timetable to deal with Obama’s health care law, something that is probably not palatable to the conservative wing of the GOP. Trump’s former campaign manager and incoming counselor to the president, Kellyanne Conway, admitted that Obamacare repeal could take years. There are multiple pieces of legislation on health care reform that have been drafted by the GOP in the past eight years, even more if you want to include the Bush presidency. Some might want to combine plans, provisions, and the ensuing cost-benefit analyses that are to follow. It will take some time, though some within the party want to do away with it now. Others want to delay some aspects of the law, specifically the taxes so they can be used to fund the alternative plans. A third position among GOP lawmakers is that they want to vote on a repeal and a replacement plan, possibly to blunt as much as possible the predictable responses from the Left when this happens: Republicans just took away people’s health care; Republicans hate the poor; and Republicans want people to die (UPDATE: Via Katie, that's already begun).

In December, Politico wrote that the repeal now faction is mostly confined to the House. Some are trying to model this effort similar to the one taken to avert the fiscal cliff in 2013, hence the deadlines. The publication also added that Senate Republicans want to implement the replacement in chunks focusing on dealing with those Americans with pre-existing conditions, drafting new health care options for America’s small businesses, and allowing the purchasing of health insurance across state lines.

Vice President-elect Pence reiterated some of these claims on Capitol Hill today, like the ability to purchase insurance across state lines, while adding that repealing and replacing Obamacare will be the "first order of business."