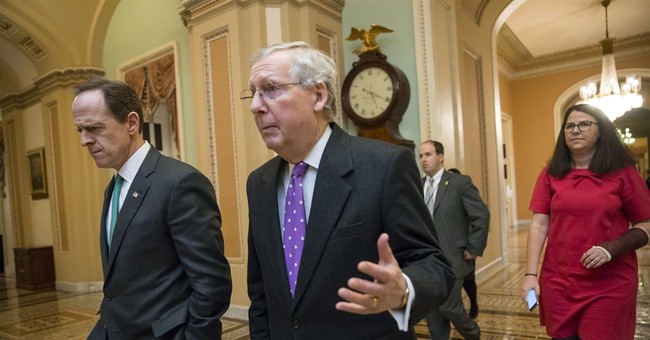 President-elect Donald Trump said that he was going to repeal and replace Obamacare with something terrific, though it looks like he’s going to keep in place some aspects of the law, specifically dependents being allowed to stay on their parents’ insurance until their 26 and barring health insurance companies from discriminating against those with pre-existing conditions.

With Obama’s days in the White House rapidly drawing to a close, Congressional Republicans are now eager to get rid of the law. The GOP controls the White House and Congress; there’s no excuse now in the eyes of the conservative base of the party. The problem is the replacement plan. Some Republicans want to get it done now, repeal the law and then work on a replacement. Others want a three-year timetable for the repealing and replacing the Affordable Car Act. Congress would vote on gutting the bill, but its effects wouldn’t go into effect for three years so lawmakers can draft an alternative plan, which would prevent 20 million people from losing their health insurance. Thus, averting a political disaster for the GOP (via Politico):

Congressional Republicans are setting up their own, self-imposed deadline to make good on their vow to replace the Affordable Care Act. With buy-in from Donald Trump’s transition team, GOP leaders on both sides of the Capitol are coalescing around a plan to vote to repeal the law in early 2017 — but delay the effective date for that repeal for as long as three years.

They’re crossing their fingers that the delay will help them get their own house in order, as well as pressure a handful of Senate Democrats — who would likely be needed to pass replacement legislation — to come onboard before the clock runs out and 20 million Americans lose their health insurance. The idea is to satisfy conservative critics who want President Barack Obama’s signature initiative gone now, but reassure Americans that Republicans won’t upend the entire health care system without a viable alternative that preserves the law’s popular provisions.

“We’re talking about a three-year transition now that we actually have a president who’s likely to sign the repeal into the law. People are being, understandably cautious, to make sure nobody’s dropped through the cracks,” said Senate Majority Whip John Cornyn (R-Texas).

The tentative strategy is reminiscent of Capitol Hill’s infamous “fiscal cliff” days, when Congress imposed simultaneous deadlines to raise the debt ceiling, extend expiring tax cuts and fund the government. The hope was that it would create irresistible political pressure to get behind a bipartisan mega-fiscal deal.

Most Republicans, particularly in the House, want to repeal as soon as possible and deal with the replacement later. Rep. Tom McClintock (R-Calif.), a staunch conservative, said the party must “take no chances; do it now.” And House leadership has heard those demands clearly.

The publication added that Sen. Lamar Alexander (R-TN) chair of the Senate Health, Education, Labor and Pension Committee wants a replacement plan ready to go by the time of the repeal vote, adding to the mash up of GOP directions certain members want to go when dealing with Obamacare. Politico also added that Senate Republicans want to implement the replacement bill “in chunks” that deals with pre-existing condition, permitting the purchase of health insurance across state lines, and crafting new plans for small businesses.

Contrary to Democratic talking points, Republicans have a lot on health care policy. In fact, since 2009, Republican lawmakers

The process will be long, as there will be reviews, cost analyses, a possible negotiation of merging competing plan among GOP lawmakers. Moreover, they also have to come to grips that perhaps some portions of the law may have to stay in place. The chance for a clean repeal without consequences was blown when Republicans failed to boot Obama in the 2012 election. By 2014, the law would have begun the process of enrolling millions into Obamacare and running on a platform of taking people’s stuff away isn’t a recipe for success. This could easily be bungled by the Republican leadership, whereas all Democrats have to do is watch the trainwreck. Repeal through a timetable is smart, the replacement plan voted on in chunks is good, but whether insurance companies will continue to suffer massive losses for that period remains dubious. Even Politico added that insurance companies could still bolt from the ACA market regardless of what happens on the Hill, especially after a repeal vote—creating another headache for the GOP on replacement plans. Alexander’s approach seems sensible as well, though there won’t be a serious replacement plan in the timeframe that would be to the liking of the conservative base, unless the GOP moves on another issue of equal importance, which is filling Scalia’s vacancy on the Supreme Court; an issue that even Democrats said must be addressed if we don’t want to risk our entire legal system crashing to the ground. That’s some great hyperbole there from the Left. Trump’s jobs and tax agenda could serve as a buffer to push back the clock on a repeal vote with a legitimate replacement plan.

Either way, like with most things, the three-year delay looks good on paper, but let’s be honest. If you’re a health insurance company that has lost hundreds of millions dabbling in this market and Congress just passed a repeal of Obamacare bill, you’d cut all ties as well.