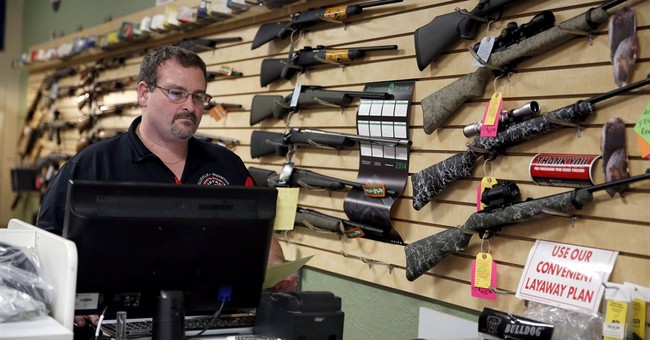 Last December, we saw 3.3 million background checks being conducted by the FBI on firearm purchases. That’s a record number. In all, 23.1 million total checks were run through the National Instant Criminal Background Checks (NICS) system, making 2015 a record year for gun sales. Again, the reasons for the dramatic increase are straightforward. We have a pro-gun control Democratic president; we’ve seen a rash of horrific terrorist attacks; and said president has enacted a series of executive actions on gun control.

For January, gun sales set yet another record, as Stephen Gutowksi of the Free Beacon wrote earlier this month:

With 2,545,802 checks processed through the National Instant Background Check System, January 2016 beat the previous record, set in January 2013, by 50,326 checks. Though January’s number represents a drop from the all-time single month record set in December 2015, it is also marks the ninth month in a row that has set a record. It is also the third month in a row with more than two million background checks.

The number of background checks conducted by the FBI is widely considered the most reliable estimate for gun sales in the country since all sales conducted through federally licensed gun dealers and some sales conducted by private parties are required by law to obtain a check.

However, the number is not a one-to-one representation of gun sales. Many private sales are not included in the system. Also, in some cases a single background check can apply to the sale of multiple guns. Some states use background checks for their gun carry permitting process, which does not involve the sale of a gun.

So, Americans are buying guns, going through the process to obtain a carry permit to exercise their rights, or obtaining a carry permit before they eventually buy a gun. These are all good things. On a less than positive note, the surge in sales has led the NICS system to become overloaded, with appeals being forced to the side due to lack of staff. Citizens who may share the same name with a known felon and were denied a transfer file such appeals. This could be depriving Americans of their Second Amendment rights. The NICS system has no more than 100 analysts, while other employees for the database have been denied leave since Thanksgiving to process all the requests. Congress maybe mulling approving additional staff to help with the workflow, with the National Rifle Association not opposing such an initiative, as long as the additional funds and NICS employees are used to fix the processing delays and not harass law-abiding Americans.

Lastly, the January sales report continues to reinforce the notion that President Obama, the Democratic Party, the anti-gun wing of America, and the media are members of an elite squad of gun salesmen, who have encouraged Americans to buy over 100 million firearms since the beginning of Obama’s presidency. Take a bow, folks!