Americans Have Bought Over 100 Million Guns During Obama's Presidency 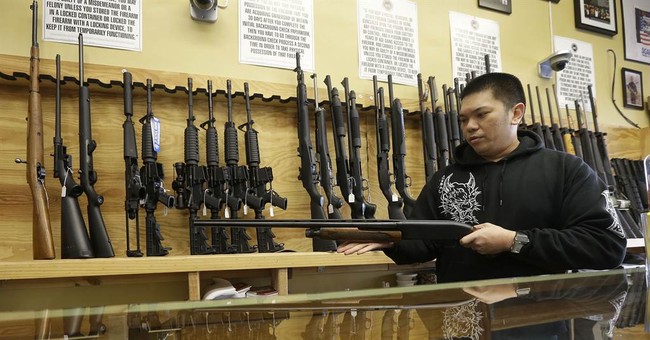 Okay; now there’s no denying it. President Obama, the Democratic Party, the liberal media, and other members of the progressive left are the best gun sales team of the decade. Yesterday, Fox News’ Los Angeles Correspondent William La Jeunesse told colleague Martha MacCallum that since President Obama took office, over 100 million guns have been bought by Americans nationwide.

He added “Americans are not just putting these in their closet, waiting for a burglar. They’re taking classes, getting permits to protect themselves.”

Last week, Christine wrote that the number of background checks ran by the FBI on Black Friday reached a record 185,345. As for gun production, it's increased by 140 percent under the Obama presidency. As for concealed carry permits, John Lott of the Crime Prevention Center released a study in July, showing that they’ve increased 270 percent for women and 156 percent for men since 2007. There’s also evidence “that permit holding by minorities is increasing more than twice as fast as for whites.” In Chicago, the areas with the most carry permits are predominantly black and Hispanic neighborhoods.

As for women, a lot of attention has been devoted to their increased participation in shooting and gun ownership. Across the country, women have been taking the proper courses to obtain their carry permits.

At the same time, violent crime has never been lower, which is a point that President Obama said law enforcement should be proud of when he addressed the International Association of Chiefs of Police in October. He also said he isn’t looking to take anyone’s guns away.

“Every time a mass shootings happens, one of the saddest ironies is suddenly the purchase of guns and ammunition jumps up because folks are scared into thinking that, ‘Obama’s gonna use this as an excuse to take away our Second Amendment rights…Nobody’s doing that," the president said.

La Jeunesse noted that the spike in firearms sales is unrelated to “crime sprees” since everyone is exercising their Second Amendment rights.

Then again, it’s true that firearm and ammunitions sales usually go through the roof under this presidency after mass shootings because anti-gun liberals want to do just that–eviscerate the Second Amendment.