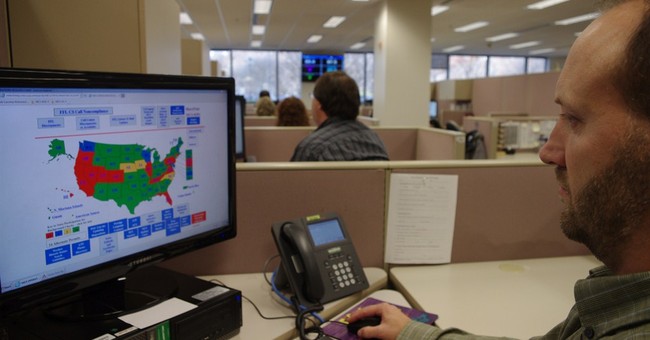 With record background checks being conducted on gun sales, the FBI’s National Instant Criminal Background Check System (NICS) is becoming overwhelmed. It’s got to the point where would-be buyers filing petitions for being denied gun transfers have been put on the backburner, possibly denying many citizens of their Second Amendment rights. There aren’t enough NICS analysts, of which there are less than 100, and employees for the database have been denied annual leave since before Thanksgiving (via USA Today):

Since October, the bureau’s entire cadre of appeal examiners— about 70 analysts — was redeployed here to help keep pace with waves of incoming background investigations that continued through December when a record 3.3 million firearm sales were processed.

The transfer of examiners, which had left a backlog of 7,100 appeals, is only part of a makeshift reorganization that FBI Assistant Director Stephen Morris said has become necessary to handle a burgeoning workload that expands in the wake of every mass shooting and call for increased gun control that invariably prompt firearms sales binges across the country.

Since before Thanksgiving weekend, all annual leave for the more than 400 employees of the bureau’s National Instant Criminal Background Check System has been canceled. That Black Friday, the system was swamped with 185,345 background check requests on new firearm sales, a new single-day record. Morris said temporary background check examiners also are being pulled from internal construction projects and bureau divisions that oversee the gathering of crime statistics across the nation.

The near-constant frenzy of activity within the FBI’s sprawling complex, four hours away from the nation’s capital, may represent the most compelling argument in favor of at least part of President Obama’s recent executive actions aimed at reducing gun violence: the addition of 230 examiners to the NICS operation and 200 more agents for nation's chief gun enforcement agency, the Bureau of Alcohol Tobacco Firearms.

The new positions are desperately needed, authorities said, to support the seriously stressed NICS system and to prepare for an even heavier workload as a consequence of the central provision of the administration's executive actions. That directive would require an increasing number of private firearms dealers to be licensed, subjecting their customers to scrutiny under the federal background check system.

Some of the administration's most vocal opponents on gun policy, including those who offered initial skepticism or outright opposition when the executive actions were unveiled earlier this month, now appear open to potentially adding the hundreds of requested positions that would require congressional approval.

The publication added that those waiting in the delayed queue have increased steadily as well. While more than 70 percent of gun sales sent through NICS are approved within minutes, there are some that need further review before the sale can be completed. This usually happens when a person’s name is similar to that of a convicted felon. If nothing criminal is found on the prospective buyer within three days, the dealer could authorize the transfer. It’s up to their discretion. And if it turns out that the buyer, who was allowed to walk away with a gun after three days, is a person prohibited from owning firearms, then the matter is referred to the Bureau of Alcohol, Tobacco, Firearms, and Explosives for firearm retrieval.

Attorney General Loretta Lynch says that the NICS system is riddled with incomplete records, which could help those who erroneously fall into the delayed response category from obtaining their firearms more smoothly. As with mental health records, a majority of the states incorporate those records into NICS, though the federal government cannot compel states to turn over such information via a mandate. Some states voluntarily turn over those records into the federal database. Others have state-based ones, but there are various protocols regarding reporting mental health to the appropriate authorities in accordance with federal gun laws.

Before Sarah Kliff went to Vox, she wrote for the Washington Post, where after Newtown–she wrote that a possible way for all states to participate in a national database is to incentivize them with more funds, or withhold them due to lack of participation. It’s similar to how every state mandates that their drinking age is 21. The 1984 National Minimum Drinking Age Act allowed states to keep their age of consumption to 18, but they would lose federal transportation money if they did. As a result, every state complied.

If the expansion of assets to NICS is done properly, the National Rifle Association has no objections.

"If the addition of these agents are used to apprehend criminals — not to harass law-abiding gun owners — and (the examiners are used) to improve the broken NICS system, we would have no objection,'' said NRA spokesperson Jennifer Baker.

At the same time, more Americans are exercising their Second Amendment rights. Hard to see how that’s a bad thing, unless you’re a liberal.