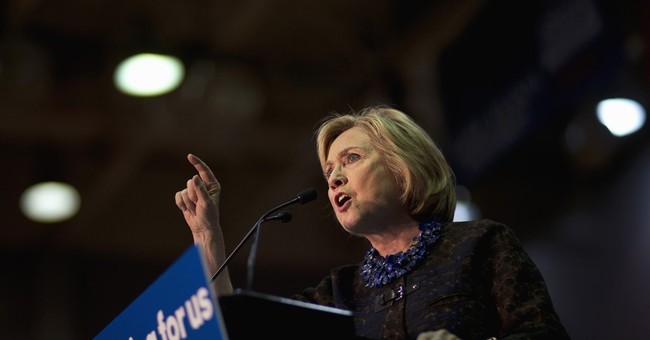 As Judicial Watch reminded us yesterday, former Secretary of State Hillary Clinton is still under FBI investigation over the use of her private email server. Now, we have this development from Lachlan Markay of the Washington Free Beacon–the madam secretary signed a nondisclosure form, which carried criminal penalties for any unauthorized disclosure of classified information:

A day after assuming office as secretary of state, Clinton signed a Sensitive Compartmented Information Nondisclosure Agreement that laid out criminal penalties for “any unauthorized disclosure” of classified information.

Experts have guessed that Clinton signed such an agreement, but a copy of her specific contract, obtained by the Competitive Enterprise Institute through an open records request and shared with the Washington Free Beacon, reveals for the first time the exact language of the NDA.

“I have been advised that the unauthorized disclosure, unauthorized retention, or negligent handling of SCI by me could cause irreparable injury to the United States or be used to advantage by a foreign nation,” the agreement states.

The State Department said in September that Clinton’s private email system, set up at her Chappaqua, N.Y., home, was not authorized to handle SCI.

State Department staffer Bryan Pagliano set up that server in Clinton’s home. He also maintained it; Pagliano pled the Fifth regarding further information on the email system. Clinton also personally paid him for his services. Time and again we’re reminded that Clinton broke federal regulations with this email system. The 2009 National Archives and Records Administration regulation said that all electronic communications from government employees needed to be saved and stored by their respective agencies. That never really happened at the State Department (they did preserve some emails, but we're horrible at it) until recently. And by recently, I mean after news of Clinton’s secret server was revealed earlier this year. Former State Department spokesperson, Jen Psaki, said the preservation of emails from senior staff should be up and running by the end of 2016.

The FBI confirmed that this is a criminal investigation, which also includes whether the former first lady violated portions of the Espionage Act. In August, Clinton finally turned over the server to the Justice Department, where an analysis found that there was at least one attempt to wipe the server clean, along with over 300 emails that were flagged for sensitive information. Communications from five separate U.S. intelligence agencies were found, and yes–the server was vulnerable to hacking. It was reportedly one of the targets for Russian-linked hackers. Oh, and to add more to this unprecedented State Department saga, Clinton’s chief of staff, Cheryl Mills, the one who also signed the NDA form, forwarded classified information to the Clinton Foundation…twice.

As many have said before, this isn’t a witch-hunt. Yes, Republicans have tons of political ammunition from Clinton’s self-inflicted wound, but it’s the Obama Justice Department investigating her. Additionally, do you remember that nauseating “enough about your damn emails” moment from Sen. Bernie Sanders, Clinton’s primary opponent, during the first Democratic debate last month? Well, he’s apparently had a change of heart. As Cortney wrote yesterday, he said, “Let the [FBI] investigation proceed unimpeded.”

This comes after Hillary’s Benghazi hearing, which saw her strengthen her position among Democrats, though her numbers on honesty and trustworthiness remain abysmal, especially with Middle America–who viewed her worse on those personal attributes questions after the October 22 hearing.

Last Note: By the way, all of that sensitive material was stored in a server housed in a bathroom closet in Denver, Colorado. Clinton needed to find a replacement for Pagliano concerning the maintenance of her private email system upon leaving the State Department.  She chose Platte River Systems, which later discovered that Clinton's information was being stored in an off-site server operated by Datto, Inc. in Connecticut.