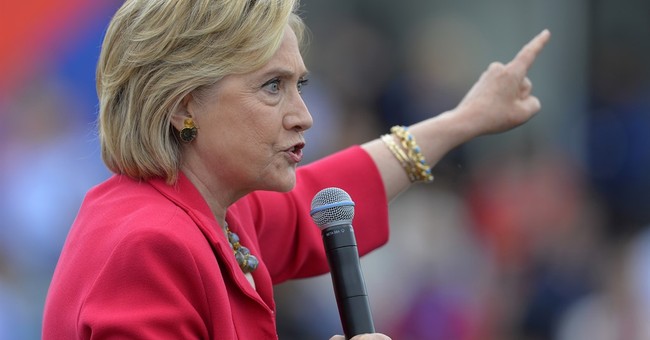 Last week, State Department Bryan Pagliano has already said he would invoke his Fifth Amendment rights if subpoenaed by the Senate Judiciary Committee to testify about setting up Hillary Clinton’s private email system. As Cortney wrote, Pagliano set up the former Secretary of State’s private server at her home in Chappaqua, New York. Now, we know that the Clintons personally paid Pagliano to maintain the system. The power couple doled out $5,000 to him for “computer services,” according to the Washington Post.

The figure was reported in a financial disclosure form in April of 2009. Yet, the Clintons continued to pay him for server maintenance, and those payments were not disclosed. The Post added that Pagliano could take extra jobs for additional income if these ventures don’t exceed 15 percent of his government salary. There also can’t be a conflict of interest between the private work and those involving the government.

Hillary Rodham Clinton and her family personally paid a State Department staffer to maintain the private e-mail server she used while heading the agency, according to an official from Clinton’s presidential campaign.

The private employment of Pagliano provides a new example of the ways that Clinton — who occupied a unique role as a Cabinet secretary who was also a former and potentially future presidential candidate — hired staff to work simultaneously for her in public and private capacities.

Pagliano did not list the outside income in the required personal financial disclosures he filed each year. The State Department has said Pagliano concluded his full-time service in February 2013, which coincides with Clinton’s departure as secretary. He remains a State Department contractor doing work on “mobile and remote computing functions,” according to a State Department spokesman.

Asked by NBC’s Andrea Mitchell on Friday whether anyone in her inner circle ever expressed concern about the setup, Clinton responded, “I was not thinking a lot when I got in.”

“There was so much work to be done,” Clinton continued. “We had so many problems around the world. I didn’t really stop and think — what — what kind of e-mail system will there be?”

The article also mentioned Pagliano’s threats of invoking the Fifth Amendment, but added that the Judiciary Committee is considering offering the staffer immunity in return for his testimony.

It’s a story that just isn’t going away. And I’m sure those in the national security community, who have been always been nervous about the Clintons due their penchant to play by different rules, aren’t thrilled (though probably not shocked) about this development. Clinton’s email server fiasco is one thing her campaign probably didn’t expect to last this long, and it’s starting to act like kelp* on the hull of a sailboat, which partially explains her favorability numbers are plummeting. She’s not seen as a trusted, or honest, leader at present. The other part is that a lot of people just don't like her.

As Guy has documented, Clinton has had over 300 emails flagged due to concerns about them contacting classified material. Clinton claimed that classified material was not sent through her email system; the Wall Street Journal  suggests otherwise. Now, the latest email dump shows that more emails were listed as classified. There’s also an allegation that the former first lady’s inner circle removed the classification markers on the sensitive emails, which is illegal.

The former Secretary of State is subject to a FBI probe into the use of her email system that is now expanding into whether she violated portions of the Espionage Act. If there are any silver linings in this mess, it’s that her last name is Clinton, which prevents her candidacy from truly being gutted. And the primary map still favors her to be the Democratic nominee for president.

Next on the list: the dealings of the Clinton Foundation.

*Yes, it's a West Wing reference ... the kelp on the hull part that is.

Did You Catch What's Bizarre About Fauci's Home Office?
Matt Vespa
Trump Responds to Reports Claiming That He Has Conflict with DeSantis
Madeline Leesman
Could We See a Replay of the Afghanistan Evacuation Fiasco in Ukraine Now?
Matt Vespa
CDC Director 'Pivots the Language' on What It Means to be Fully Vaccinated
Katie Pavlich
NPR: We're Standing By Our SCOTUS COVID Story Even Though Everyone Said It Was False
Matt Vespa
SCOTUS Declines to Intervene in Challenge Over Texas Abortion Law
Madeline Leesman
CARTOONS | Gary Varvel
View Cartoon
Most Popular