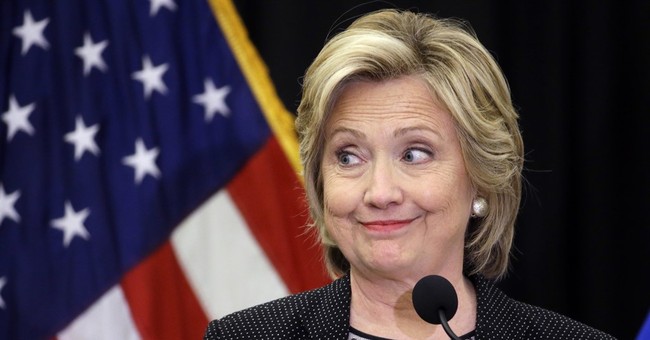 You'll recall that intelligence experts have been stating with virtual certainty that foreign agencies, proxies and entities were able to penetrate Hillary Clinton's improper, private email server on which she conducted all of her official business. Prior to being protected by woefully insufficient means, her server was reportedly totally unsecure -- no safeguards at all -- for approximately three months.

You'll recall that one element of the FBI's ongoing, multi-pronged investigation into Hillary Clinton's email scheme is determining whether foreign hacks were attempted against her emails.

You'll recall that Chinese hackers accessed tens of millions of OPM files, and that Russian hackers infiltrated less-classified email systems at the Pentagon, the State Department, and the White House.


The AP story notes that these private hackers sent at least five so-called "phishing" emails to Hillary Clinton's server, probing for weakness. This revelation may not be especially alarming on its face, but consider a few points: (1) If these hackers knew about the existence of her private domain, more sophisticated intelligence services absolutely shared that knowledge.  (2) Phishing emails were the means through which Russian hackers virtually broke into a White House computer network, according to US officials. (3) The government systems penetrated by foreign hackers were significantly more secure than Clinton's server ever was.  Last night's news is another drip in this scandal.  The pool is growing deeper.  The problem for Hillary is that there's much more to come, a point she implicitly conceded by ducking Chuck Todd's direct questions on Meet the Press about whether we should expect to see more shoes drop over the course of this saga.  I'll leave you with Valerie Jarrett telling Andrea Mitchell that, why yes, the White House did issue directives against using private email accounts for public business (Hillary circulated a similar edict to her underlings at State), and a little fundraising tidbit about Democrats' frontrunner in Iowa and New Hampshire:


Oh, and by the way, the latest batch of Hillary's emails released by the State Department under court order -- remember, these don't include the thousands Hillary attempted to unilaterally delete -- includes 155 more messages that contained classified materials.  That number has now swelled into the hundreds, and it's been determined that at least a handful of the emails in question included top secret information. Another recent bombshell revealed that Clinton failed to turn over all of her work-related emails, something she swore under penalty of perjury that she had done.