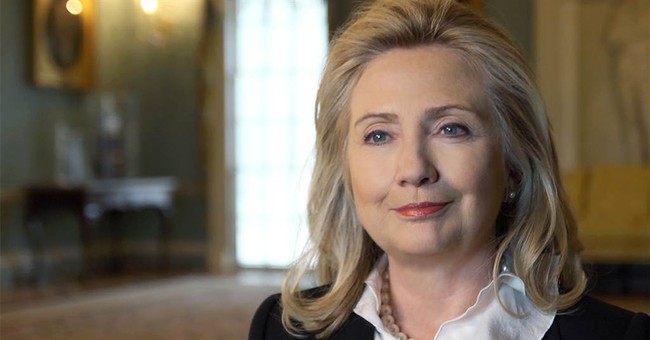 A report from the Inspector General at the State Department showed that staffers aren’t properly preserving emails for the public record. A whopping 1 billion emails were written in 2011 when Hillary Clinton was Secretary of State, but less than 62,000 were marked for preservation [emphasis mine]:

The State Department's internal watchdog has found that many department employees are not preserving emails for the public record as required by the government. That could mean a substantial amount of lost government information.

The inspector general's office, in a report out Wednesday, said that in 2011, when Hillary Rodham Clinton was secretary of state, department employees wrote more than 1 billion emails but only marked 61,156 for the public record. There's no way to know from the figures how many should have been designated as public records. Even fewer were marked for public records, 41,749, in 2013, the year when she left the department.

Clinton is under scrutiny for using her personal email exclusively for official non-classified business during her tenure and for doing so with a private server. The new report does not address the use of personal email accounts, which the department discouraged employees from using in earlier guidance.

But the investigation found that employees had no central oversight of their record-keeping responsibilities with email, many did not know about the rules and some feared the consequences of their emails being searched and exposed.

The report found the laxity despite a 2009 upgrade in the system used to preserve emails as public records. It recommends better training, sharper guidelines for what should be made a public record and a department-wide review of how emails are used and kept.

Shannen Coffin at the National Review wrote last week that the 2009 National Archives and Records Administration regulation that states all emails on private accounts must be preserved is merely the original 1995 statute in “slightly different language.”

Yesterday, the former first lady held a press conference at the UN, though IJReview’s Larry O’Connor referred to it as more of a “cameo appearance,” to address the controversy. Let’s just say it didn’t go well, and she might have been caught telling a lie regarding email correspondences between herself and former President Bill Clinton; President Clinton doesn’t use email. She also admitted that she used her personal email out of convenience, and that her personal emails were not turned over–or saved. Clinton assured that the private server she used had no security breaches and was under Secret Service protection, but stated that its contents will remain private.

This presser was never going to put this issue to bed. First of all, the convenience argument really doesn’t have oxygen, especially when left-leaning members of the press, like Lawrence O’Donnell, can destroy that argument in less than two minutes.

“Convenience is not a choice you have in government,” he said yesterday on "Now with Alex Wagner."

Moreover, she admitted last month that she could handle two devices, but Judicial Watch says that Hillary may have used two unauthorized devices as Secretary of State. Granted, this is from one source [emphasis mine]:

On at least half a dozen occasions Clinton’s top aides asked the State Department’s Office of Security Technology to approve the use of an iPad and iPhone, according to JW’s inside source. Each time the request was rejected for security reasons, the source confirms. The only mobile device that meets the agency’s security standards is the BlackBerry, JW’s source said, adding that the Office of Security Technology—Bureau of Diplomatic Security’s Directorate of Countermeasures must approve all equipment such as cameras, phones and communication devices for all officials.

Evidently set on using the popular Apple devices, Clinton repeatedly challenged the ban and asked management in the Office of Security Technology to allow their use. The executive secretariat responsible for all communications and information technology always rejected the requests, JW’s source affirms. “From day one Hillary was trying to get the iPhone and the iPad approved,” the State Department official told JW. “She kept trying and trying to get us to approve the iPhone and the iPad, but we wouldn’t do it. Technology security experts tested the iPhone and the iPad several times because she constantly wanted them approved, but it never happened.”

The longtime State Department employee reveals that it’s common knowledge among government security tech experts that Apple devices don’t meet strict security standards so agency insiders were puzzled that the Secretary of State was hell-bent on using them. “There was a lot of head-scratching,” JW’s source revealed. Every State Department employee goes through a rigorous security training that includes strict warnings about using non approved equipment or personal email like Clinton did throughout her tenure as the president’s chief foreign affairs officer, the agency insider said.

Clinton’s persistent efforts to persuade the State Department’s technology security experts to approve the use of her favorite Apple devices led those in the division to conclude that she did in fact go through with it. “My guess is she did it and wanted approval after the fact,” JW’s source said. “But no waivers were ever issued.” JW reached out to the State Department for a comment on this latest potential scandal surrounding its former leader, but failed to get a response.

Yet, back to something more concrete, that fact that Hillary decided she could delete some 31,000 emails has raised eyebrows in the press. It means the public will not view the majority of the emails in question, which now total to a little over 62,000. If anything, Hillary possibly just killed any chance of being a candidate for a more open, transparent government, which she harped on in 2007-08. It reinforces the notion that the Clintons play by their own set of rules, and that the public should trust her because she’s Hillary.

by Clinton camp's count - less than 50% of 62K e-mails sent or received were turned over to State. Rest won't be seen.

Hillary’s office says she turned over 30,490 emails to the State Dept. The remaining 31,830 were “private, personal records."

The National Journal’s Ron Fournier had a more brutal assessment:

Her faux disclosure is akin to a divorced father losing custody of his four kids, kidnapping them, returning three, and patting himself on the back for turning over "the vast majority of my kids." He broke the law. Clinton broke the rules.

Trust me, I'm a Clinton. This is part of a decades-old pattern: For all their strengths, Hillary and Bill Clinton have a weakness for victimization, entitlement, and their unbounded belief that the ends justify the means.

Rules are for little people, not them.

She had a choice—the right way or the wrong way, the new way or the old way. She chose to turn back the clock to the 1990s, when her husband's White House overcame its wrongdoing by denying the truth, blaming Republicans, and demonizing and bullying the media.

As for the deletion of work-related emails, Clinton addressed that yesterday and said that she didn’t. The White House also says there’s no evidence that she did either. Well, that just settles it, right?