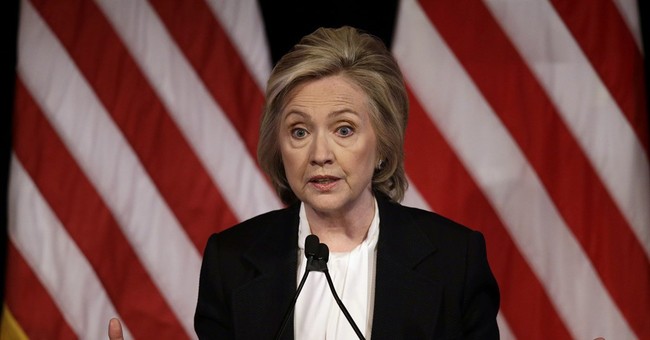 This federal investigation is criminal, ongoing, serious, and widening:

As pressure builds on Hillary Clinton to explain her official use of personal email while serving as secretary of state, she faced new complications Tuesday. It was disclosed her top aides are being drawn into a burgeoning federal inquiry and that two emails on her private account have been classified as “Top Secret.” The inspector general for the Intelligence Community notified senior members of Congress that two of four classified emails discovered on the server Clinton maintained at her New York home contained material deemed to be in one of the highest security classifications - more sensitive than previously known. The notice came as the State Department inspector general’s office acknowledged that it is reviewing the use of “personal communications hardware and software” by Clinton’s former top aides after requests from Congress.


These developments are based on the emails Hillary's team didn't  unilaterally destroy, mind you:

[A State Department IG spokesman] initially said the Intelligence Community inspector general, which had already been looking into the issue of whether classified information has been improperly shared with or by Clinton, has taken responsibility for deciding which emails to review, from whom and determining their classification. However, Andrea Williams, a spokeswoman for the Intelligence Community Inspector General, said that office “never had access to any emails other than those provided to the State Department by former Secretary Clinton.” But she said her office could get involved. “The intent is not to just focus on Clinton,” Williams said...Clinton, [who] has repeatedly denied she ever sent or received classified information, has attempted to downplay the scrutiny as mere partisan attacks, but questions about her judgment and motive for setting up a private server in her Chappaqua house in 2009 continue to dog her. Her campaign declined to comment.


Hillary stated unequivocally that there was "no classified material" whatsoever on her dangerously unsecure private email server, a claim that has been proven false several times over, based on a small sub-sample of the emails she didn't delete.  Not only were ten percent of the messages reviewed classified -- and classified at the time -- two of the four contained top secret information.  As the McClatchy story above says, top secret information is "deemed to be in one of the highest security classifications" and was "more sensitive than previously known. Hillary's many, verifiable lies about her email scheme are piling up.  And these latest revelations are significant:


Mrs. Clinton has stated that her server would remain in private hands and would not be turned over to investigators. That posture is no longer operable, it seems:

.@hillary has "directed her team" to hand over email server and thumb drive to the justice department, according to @NickMerrill


Will the FBI's digital forensics team be able to retrieve the more than 32,000 emails Team Clinton reportedly wiped from the server? We already have clear evidence that Hillary did not turn over all work-related emails to the State Department, as she's said publicly…and has now sworn to a federal judge. As questions swirl and tales unravel, federal agents are chasing down leads and conducting their investigation. It's time for Hillary Clinton to answer specific, sustained questions, under oath.

UPDATE- Former NSA analyst John Schindler breaks down how serious this breach is, adding that it would be "a joke" if the DOJ does not pursue a prosecution, given its severity: