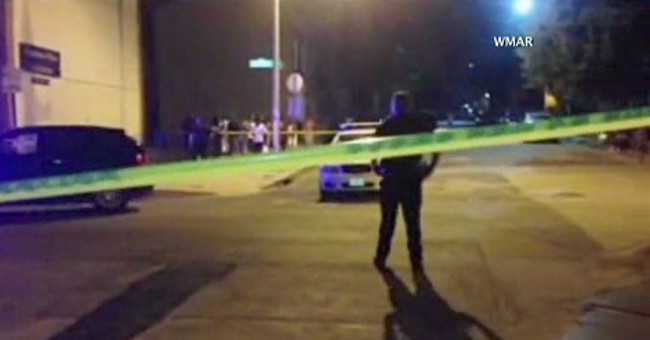 The city of Baltimore has called on the federal government once more, this time to help them curb the spike in violent crime. Concerning shootings and homicides, July was the worst month for the city since 1972. Interim Baltimore Police Commissioner announced that federal agents from the Secret Service, U.S. Marshals Service, Drug Enforcement Administration, and the Bureau of Alcohol, Tobacco, Firearms, and Explosives joined Baltimore City’s demoralized police department on Sunday (via Baltimore Sun):

The violence this year is in some ways unprecedented: No previous year has had two months with more than 40 killings, and the 116 killed from May to July is a three-month high in data kept since 1970.

Davis said officers have confiscated about 20 percent more guns on the street this year than at this point last year. Police believe people are arming themselves amid an "atmosphere of uncertainty" after April's unrest.

"Given where we are now in Baltimore, we need to win tomorrow," Davis said. "We need to win Tuesday, then we need to win Wednesday. So we can't be looking too far down the road because we're in a moment we need to fight our way out of. Having [federal agents] embed with our homicide detectives and literally be on the streets of Baltimore, boots on the ground, is what we need right now."

A spokesman for Mayor Stephanie Rawlings-Blake called the move to bring in federal agents "exactly the kind of all-hands-on-deck approach that the mayor has been calling for."

In another major step that he hopes will help stem the violence, Davis promoted or moved 28 personnel into new roles over the weekend, which he said would "streamline" operations by simplifying the organization chart.

"This reorganization puts every detective in the BPD under a singular chain of command so they're not siloed from each other, and they're sharing information with each other more rapidly, more consistently in real time," he said.

The city had the National Guard deployed to restore order during the April riots after Gov. Larry Hogan also declared a state of emergency. Since the charges against six police officers involved in the death of Freddie Gray were brought forward, the city has seen a surge in violent crime, which usually occurs in the aftermath of a riot  Those six officers have been officially indicted as well. Ironically, the neighborhoods that once slammed the police are hoping they come back to combat the rising crime rates.

BREAKING: Medical Examiner Releases Officer Sicknick's Cause of Death. It's Not What You've Been Told.
Katie Pavlich
Fact Check the Left: Was Daunte Wright Stopped by Police Because of a Car Air Freshener?
Matt Vespa
'Rioting and Violence Have Absolutely No Place in Florida': Ron DeSantis Signs Anti-Riot Bill Into Law
Julio Rosas
These Are the Two Issues Trump Has with Biden's Afghanistan Withdrawal Date