Baltimore Since Freddie Gray: A Spike In Crime, A ‘Preventable’ Riot, And The Dismissal Of A Police Commissioner 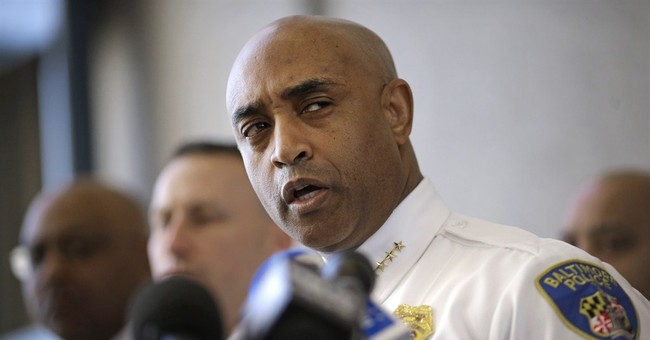 Since the controversial arrest of Freddie Gray, who later died in police custody, the city of Baltimore has been thrown into turmoil. The six officers involved in Gray’s arrest have been indicted, with charges ranging from manslaughter, second-degree assault, misconduct in office, reckless endangerment, and vehicular manslaughter. As a result, officers have been taking less of an aggressive approach in fighting crime. Crime has spiked–and neighborhoods that once decried police now want them back on patrol.

The city has had a problem with its police department, which has a history of improper arrests and professional misconduct. At the same time, Mayor Stephanie Rawlings-Blake found herself in hot water when she reportedly said, “It's a very delicate balancing act because while we try to make sure that they were protected from the cars and the other things that were going on, we also gave those who wished to destroy space to do that as well” at a press conference during the Freddie Grays riots in April. She later clarified those remarks on her Facebook page.

Nevertheless, the riots, which began on April 25, grew so out of control by April 27 that Gov. Larry Hogan (R-MD) declared a state of emergency in Baltimore city and mobilized the National Guard. By May 3, the rioting had pretty much subsided. In a review conducted by the police union, they pointed that such chaos was “preventable.” It was released on July 8:

The union's "after action review" compiles accounts from officers to make the case that commanders' orders to avoid engaging the youths who were concentrated around Mondawmin Mall on the afternoon of April 27 emboldened people to riot, allowing the unrest to spiral out of control and spread across the city.

The union said commanders did not want police to be perceived as aggressors, but the result was officers doing nothing in the face of lawlessness.

Officers described being hit with chunks of concrete, sheltering inside businesses and buying their own protective equipment.

"I had never in my 14-year career been as afraid as I was at that moment," one said.

"Decisions implemented by top commanders of the Police Department left officers in harm's way," Lt. Gene Ryan, president of the Fraternal Order of Police, said at a news conference. "Equally as important, the lack of preparation put the very citizens we are sworn to protect in harm's way as well."

Of course, the Mayor’s office did not agree with the report, but nevertheless, Mayor Blake fired Police Commissioner Anthony Batts later that day:

Mayor Stephanie Rawlings-Blake fired Police Commissioner Anthony W. Batts Wednesday, saying his presence had become a distraction in a city that needs to focus on ending a dramatic spike in homicides.

"Too many continue to die on our streets, including three just last night and one lost earlier today," Rawlings-Blake said. "Families are tired of feeling this pain, and so am I. ... We need a change."

The mayor's decision to replace Batts on an interim basis with Deputy Police Commissioner Kevin Davis — effective immediately — came as the City Council was preparing to send her a letter calling for Batts' resignation. And the city's police union was poised to hold a no-confidence vote next week.

Her timing surprised some. Just hours before announcing that she had fired Batts, the mayor's office issued a statement denouncing the union's report as "no more than a trumped up political document full of baseless accusations, finger pointing and personal attacks."

Baltimore's next police commissioner will have a daunting to-do list: quell a surge in homicides, rebuild trust between officers and the public, win the confidence of a demoralized and alienated department, and keep the peace when the explosive Freddie Gray case comes to trial.

"It's the toughest job in the United States at the moment," said Eugene O'Donnell, a professor at the John Jay College of Criminal Justice in New York and a former New York City police officer.

Commissioner Anthony Batts was fired by the mayor on Wednesday [July 8], less than three months after riots erupted over Gray's death from a spinal injury the 25-year-old black man suffered while being bounced around the back of a moving police van. Six officers are awaiting trial in October on charges ranging up to murder.

"You have a confluence of factors: You have an ongoing criminal case that's traumatic for everybody. You have the specter of riots. For the police union and officers, they're alienated, and the concern is that the cops will be further alienated," O'Donnell said. "You need a chief who can, first and foremost, drive everyone toward common ground."

In dismissing Batts, Mayor Stephanie Rawlings-Blake said his approach was too divisive and his presence too damaging.

Just hours before his firing, in a sign that the 2,800-officer department's rank-and-file had lost confidence in Batts, the police union issued a report blasting his response to the looting, arson and vandalism that broke out April 27. The report said Batts discouraged officers from wearing protective gear and told them not to engage with rioters. Roughly 200 officers were injured during the unrest.

Report: Thousands of urns shipped to Wuhan, where the virus is supposedly under control
Hotair
Biden Attacks Trump Over Lack of Ventilators; But There’s This Inconvenient New Report From CNN…
Redstate