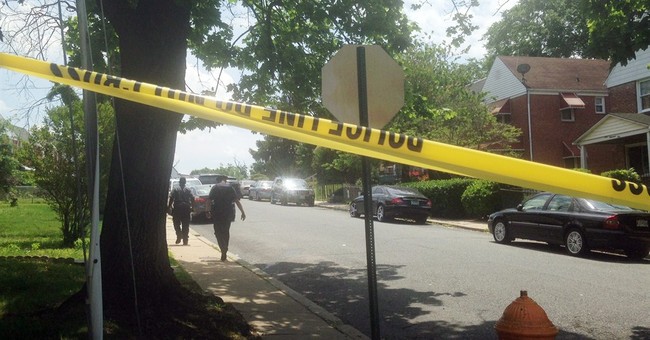 In the wake of Freddie Gray’s death in police custody, arrests in Baltimore have dropped significantly. Police are no longer “arresting everybody for every little thing,” according to Baltimore City Councilman Brandon Scott, which he says “led to the underlying issues that we have been dealing with in the city.” In other words: distrust of police.

But more than that, officers are “fearful at doing their jobs,” according to Wicomico County Sheriff Mike Lewis. And that has meant they are no longer being proactive.

And now, of course, we’re seeing a big spike in violence, which has some residents wishing the police would come back.

Antoinette Perrine has barricaded her front door since her brother was killed three weeks ago on a basketball court near her home in the Harlem Park neighborhood of West Baltimore.

She already has iron bars outside her windows and added metal slabs on the inside to deflect the gunfire.

“I’m afraid to go outside,” said Perrine, 47. “It’s so bad, people are afraid to let their kids outside. People wake up with shots through their windows. Police used to sit on every corner, on the top of the block. These days? They’re nowhere.” […]

Now West Baltimore residents worry they’ve been abandoned by the officers they once accused of harassing them. In recent weeks, some neighborhoods have become like the Wild West without a lawman around, residents said.

“Before it was over-policing. Now there’s no police,” said Donnail “Dreads” Lee, 34, who lives in the Gilmor Homes, the public housing complex where Gray, 25, was arrested.

“I haven’t seen the police since the riots,” Lee said. “People feel as though they can do things and get away with it. I see people walking with guns almost every single day, because they know the police aren’t pulling them up like they used to.”

It's not that officers have completely backed down, it's just that they're trying to do their jobs in much different conditions. “Our officers tell me that when officers pull up, they have 30 to 50 people surrounding them at any time,” Police Commissioner Anthony Batts said, reports the AP.

As Lewis said about the violence, “I hope this is a shot fired across the bow of mayors and urban leaders across this country. Once you disembowel your law enforcement officers, then you cannot no longer expect them to go out there and protect you, or protect your communities. This is very troubling, the worst I’ve ever seen in 31 years of law enforcement.”