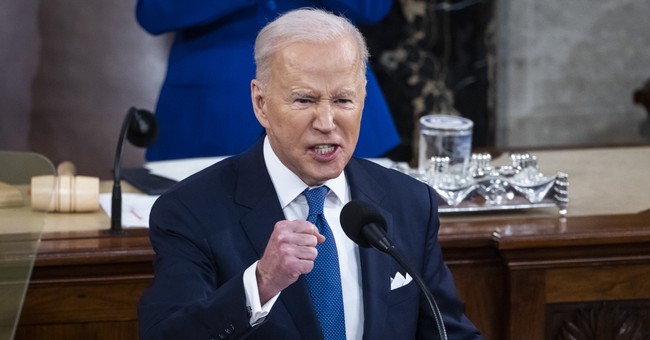 Three easy steps to winning the midterms.  Step one: Spend six months workshopping and focus-grouping the term "Ultra MAGA" to finally tie the GOP to Donald Trump.  It worked like a charm in Virginia and New Jersey last fall.  Step two: Get a grumpy near-octogenarian with a lousy approval rating to finally start railing against Republicans.  Step three: Victory.  It's foolproof:

The fever didn’t break. And for the White House, efforts at bipartisanship have finally taken a backseat

To the frustration of some of his closest aides, Biden had insisted on trying to work with GOP

But it’s now time to change course - and attack https://t.co/OD42V5DXoR

To the frustration of many Democrats and some of his closest advisers, President Joe Biden has steadfastly spent more than a year in office insisting on trying to work across the aisle with Republicans. It’s produced some notable legislative successes. But it’s also been colored by a fair dose of in-your-face GOP obstructionism. Now, more than a year later, Biden no longer believes that most Republicans will eventually drop their fealty to Donald Trump and show a willingness to engage. He himself admitted he was wrong.  “I never expected the ultra-MAGA Republicans who seem to control the Republican Party now to have been able to control the Republican Party,” the president said last week. “I never anticipated that happening.” To many Democrats, the admission was long overdue. Even some in Biden’s orbit had been urging a far more aggressive response, according to four White House officials and Democrats close to the White House.

Small, respectful query: What planet do these people occupy? I'm talking about both the Democrats cited in the story, and the journalists who wrote and edited it.  Joe Biden certainly likes talking about healing and bipartisanship from time to time.  Indeed, it was a feature of his successful presidential campaign, and he himself cited it as a core mandate given to him by the electorate after he won:

To make progress, we must stop treating our opponents as our enemy. We are not enemies. We are Americans...This is the time to heal in America. Now that the campaign is over — what is the people’s will? What is our mandate? I believe it is this: Americans have called on us to marshal the forces of decency and the forces of fairness...I will work as hard for those who didn’t vote for me — as those who did. Let this grim era of demonization in America begin to end — here and now. The refusal of Democrats and Republicans to cooperate with one another is not due to some mysterious force beyond our control. It’s a decision. It’s a choice we make. And if we can decide not to cooperate, then we can decide to cooperate. And I believe that this is part of the mandate from the American people. They want us to cooperate. That’s the choice I’ll make.

There have been a few areas in which cross-aisle cooperation has been achieved. Perhaps most notable is the bipartisan commitment to helping Ukraine fight off the Russian invasion, exemplified recently by generous military aid packages, and visits to Kiev by senior members of the Biden administration, the Democratic House Speaker, and a delegation led by the Senate's GOP leader. But even in this case, it was the evil of the Kremlin that unified Washington, not some extraordinary stroke of leadership from Biden. One other major example was the bipartisan infrastructure bill, whose fate was thrown into question for some time after Biden abruptly went along with left-wing demands that it be tied to the gargantuan 'Build Back Better' spending explosion that every Republican opposed. Eventually, that partisan strategy faltered and the bipartisan measure passed. Aside from a handful of lower-profile items here or there, it's been slim pickings overall.

Why is that?  Part of it is GOP obstructionism, of course, though they've been limited in their ability to obstruct, given that Democrats control the House, the Senate, and the White House.  It's also preposterous to pretend that GOP obstruction can be simply chalked up to "fealty to Donald Trump."  I recall the GOP saying no, repeatedly, to President Obama, long before Trump was a central figure in American politics.  Opposition parties oppose.  Especially when they're locked out of power completely.  Democrats did the same thing to President Bush.  They even called it "resistance" under Trump.  Controlling the 'trifecta' in Washington, Democrats have used their power unwisely, using the 'reconciliation' tool to bypass a GOP filibuster and pass a nearly $2 trillion so-called 'COVID relief' bill that was extraordinarily wasteful, and that even of their own economists admit helped drive out-of-control inflation.  Amazingly, after $6 trillion in total 'emergency' spending, they're now claiming they're out of money for fundamental pandemic-fighting tools, which is a terrible indictment of their own allocations and governance:

“Shoestring.” We’ve spent SIX TRILLION DOLLARS. A lot of that slush fund didn’t go to pandemic-related essentials & that’s the fault of the people in charge. https://t.co/pohOHSdVEy

Democrats fell short of passing another major bill due to opposition within their own ranks.  Senators Joe Manchin and Kyrsten Sinema couldn't support the 'BBB' debt and inflation bomb as drawn up.  They also wouldn't blow up Senate rules to pass radical "voting rights" or abortion legislation, neither of which even commanded simple majority support in the upper chamber.  The fever that hasn't broken, to borrow Politico's phrase, is the Left's overreach and misreading of the public mood.  And look how that's been working out for them:

Which brings us back to the president.  Much of the time, he's governed not like the president-elect quoted above, but like a man whose team and decisions are driven by the Very Online Left.  He's been determined to make lasting 'progressive' change, pushing an agenda that Republicans would never be able to support.  And the notion that he's been far too kind to the GOP along the way is laughable.  He's just elevated a press secretary who's reflexively labeled various critics racists, and whose embraced multiple electoral conspiracy theories.  She is his top spokesperson. He's nominated extreme leftists to various positions of power.  And he's demagogued and blamed Republicans frequently.  For crying out loud, this man -- who famously told a heavily black audience that Mitt Romney and Paul Ryan wanted to re-enslave them during a 2012 campaign speech -- compared opponents of his party's elections takeover scheme to segregationists and Confederates, also calling them domestic enemies:

Joe Biden said during this speech that people who disagree with his bill to federalize elections are "domestic enemies" and are on the side of George Wallace, Bull Connor, and Jefferson Davis.

What you see here is truly the soul of nation being restored. pic.twitter.com/P2gZi5K0nS

Oh, but now he's going to finally take off the gloves, or whatever.  Sure.  Let him yell at clouds.  It's been serving him so well thus far.