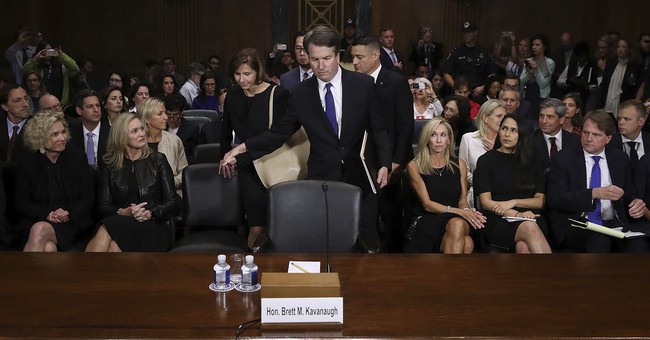 In their new book, Justice on Trial, Fox News Contributor Mollie Hemingway and the Judicial Crisis Network's Carrie Severino report numerous fresh revelations about last year's bruising confirmation battle over Justice Brett Kavanaugh.  The pair was granted extraordinary inside access by numerous players at the highest levels of the now-infamous, high-stakes drama, resulting in an extraordinary piece of journalism.  The book, which hits shelves today, is packed with vignettes and previously-unknown facts about what was playing out behind the scenes while the final outcome hung in the balance.  Based on early reporting around the book, here is a glimpse at some of them:

(1) Skeptical First Lady.  Melania Trump believed Kavanaugh's accuser was lying: "A new book says that first lady Melania Trump told her husband she thought Christine Blasey Ford was lying when she testified before the Senate Judiciary Committee against now-Justice Brett Kavanaugh. 'You know that woman is lying, don’t you?' Melania Trump told President Trump...The accuser gave tearful testimony amid Kavanaugh’s Senate confirmation hearings about a sexual assault that she said she suffered at the hands of the future justice, when they were teenagers...But Melania didn’t buy it, according to the book....Reached for comment Sunday, the White House declined to comment on the first lady quote."

(2) Threats and intimidation. Sen. Susan Collins was endlessly harassed by left-wing activists, including at her private home, during the weeks-long melee.  The crucial swing Senator, a moderate Maine Republican, announced her decision to vote yes in a thorough and serious floor speech.  But before and after her vote, political opponents sought to make her life miserable:

Protesters had been harassing Collins for months...She received a torrent of obscene and threatening voicemails. One rainy night, after working late, Collins was accosted outside her Capitol Hill townhouse by a man who shined a flashlight in her eyes and filmed her as he asked her questions, implying he was from CNN. How long he had been waiting for her in the pouring rain she didn’t know, but she got past him and into her house, where she called the police. The man returned later and left a basket containing four potatoes on her doorstep, the significance of which she never determined. As protesters besieged her Capitol Hill and Maine offices, Collins was particularly troubled by the abuse that her staff had to endure. A 25-year-old in her Maine office...answered a call from a man who told her that if Collins voted for Kavanaugh’s confirmation then he hoped the young staffer would be raped and impregnated. The senator tried to assure her that the harassment would taper off after the vote, but she quit — a young woman driven out of public service, Collins ruefully noted, in the name of women’s rights.

After her speech, Republican Chuck Grassley approached Collins with tears in his eyes and gave her a hug. That had never happened before, and she was touched by the gesture from a senator whose composure and fairness had never failed through all the partisan hostility. The next day, protesters were camped out as Collins left her house to head to her office on Saturday. They started singing and chanting early that morning. As she locked up, she apologized to a neighbor for the noise. He told her the protesters’ songs and chants were beautiful, but living next to a “rape apologist” was what troubled him...After the confirmation, Sen. Susan Collins continued to receive hate mail and threats, including to her family. On Oct. 15, as she was traveling home from Washington, her husband texted her a photo of himself in full hazmat gear. An envelope addressed to him had contained a letter that purported to be infused with ricin...A few days later another envelope was sent to her home labeled “anthrax.” Postal inspectors intercepted it and after determining it contained cornstarch, traced it to the sender, who was charged with sending threatening communications.

The same advance excerpt describes the immense pressure brought to bear upon Dr. Blasey Ford's close high school friend, Leland Keyser, who asserted in legal documents that she had no recollection of attending the party Ford described in her testimony. Not a single one of the witnesses identified by Ford could corroborate her memory of the alleged event. We later learned that a brief follow-up investigation by the FBI produced one lone new strand of new information: Namely, that Ms. Keyser was urged to change her story to benefit Dr. Ford.

(3) Conflicting advice.  Some advisers urged Kavanaugh to remain as calm as possible, rather than issuing an emotional and fiery denial.  Among other things, the scurrilous and insane 'gang rape' accusation ultimately helped convince the nominee that he had to exhibit the passion and indignation he'd been bottling up:

Some advisers and friends were urging Kavanaugh to embrace George W. Bush-like restraint in pushing back; others recommended a full-throated Trump-esque denial. After one aide, on that September 2018 day of his testimony, suggested Kavanaugh be gentle in talking about accuser Christine Blasey Ford’s allegations, a fired-up White House counsel Don McGahn demanded everyone leave the Capitol Hill war room where the nominee was preparing. “Everyone!” McGahn shouted...“Kavanaugh had been deluged with advice until the end. His Bush friends, by and large, told him ... not to show too much emotion,” Hemingway and Severino wrote. “But he received calls from a few senators encouraging him to show his righteous indignation.” The authors reported that McGahn, who worked to shepherd the nomination through Congress, was worried there were “too many people” telling Kavanaugh “too many things.”

They also detailed how Kavanaugh tore up his planned opening remarks the day before the hearing, after anti-Trump lawyer Michael Avenatti went public with allegations from a client claiming Kavanaugh was involved in gang rapes in high school – an accusation Kavanaugh later dismissed as a “farce.”...Kavanaugh finished writing his remarks the night before, the authors wrote, but made one addition the day of the testimony – adding a story about his daughter Liza saying they should pray for Blasey Ford. “He added a note with a black Sharpie permanent marker, his editing tool of choice. Having learned from practice that some parts of the speech would be hard to make it through, he had indicated with his Sharpie where to stop to breathe,” the authors wrote.

(4) Gut check on rudeness.  Kavanaugh's wife intervened after a testy exchange with Sen. Amy Klobuchar.  Emotions were running high, and the nominee went too far in firing back at a question from the Minnesota Democrat, who had been more professional and reasonable than many of her colleagues throughout the process.  Ashley Kavanaugh saw her husband's aggressive and snippy response to a Klobuchar question as a misstep: "The book also details how even Kavanaugh's wife, Ashley, ended up advising him on how to act while testifying. Amy Klobuchar, a member of the committee, asked Kavanaugh if he ever had so much alcohol that he couldn't remember what happened the next morning. 'Have you?' Kavanaugh fired back – a move that was widely seen as a misstep for the nominee. Ashley Kavanaugh told her husband during a recess that he needed to clean up his comments, in regard to the interaction with Klobuchar, who is now running in the 2020 Democratic primary for president. 'As soon as they returned to the holding room, McGahn told Kavanaugh it was time to reel it in,' the authors wrote. 'Ashley told Kavanaugh to calm down and encouraged him to find a way to address what he had said.' After the break, Kavanaugh apologized to the senator from Minnesota."

(5) Plugging the leaks.  After details of a pre-testimony preparation session leaked to the press while they were still ongoing, the team around Kavanaugh was substantially culled:

Former White House communications director Bill Shine and press secretary Sarah Sanders, along with a number of others, played the parts of various senators in a mock hearing. But soon after Kavanaugh left the room and the team began discussing his performance, "someone interrupted the discussion to announce that the media were already reporting that Kavanaugh was mooting with the press team," the authors write. "Later the Washington Post cited three sources who reported that 'Kavanaugh grew frustrated when it came to questions that dug into his private life, particularly his drinking habits and his sexual proclivities.' They added that he declined to answer some questions altogether, which made it sound like he had something to hide." "Their suspicions about the discretion of the broader group confirmed, the core Kavanaugh team resolved to get rid of any nonessential aides."

(6) Withholding 'dirt.'  It took real restraint to hold anything back amid an intense firestorm, but this was probably the right decision: "The book describes a central conundrum for the judge and his advocates, which is that the team 'understood that any criticism of Ford would be treated as a smear' and depicted as 'victim shaming.' Although some of those who knew Ford shared details about her behavior in high school and college that were 'dramatically at odds with her presentation in the media,' the book says, the Kavanaugh team decided to focus on his record and the damage to his reputation. The book touches on some of those alleged details involving Ford." I'll leave you with the co-authors discussing their work on Fox & Friends:

Share this on Facebook
Tweet
Dr. Fauci's Lies About Funding Dangerous Research in Wuhan Corrected By His Own Agency
Katie Pavlich
'Inflation is Worse Than We Thought' and 'A Threat to Society'
Katie Pavlich

Rebecca Downs
A Majority Have Been Personally Affected by Supply Shortages, While Biden Administration Laughs It Away
Rebecca Downs
CARTOONS | Tom Stiglich
View Cartoon
Most Popular