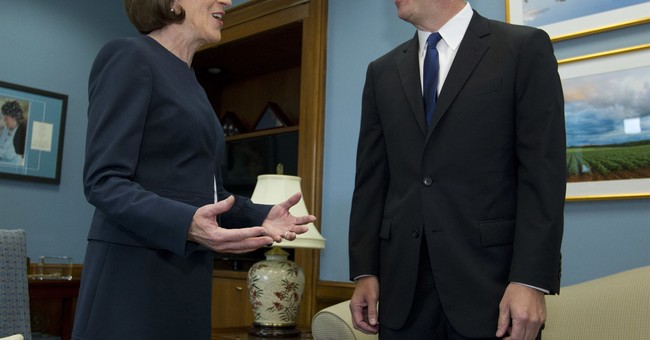 Whenever some right-winger -- or someone conveniently assumed to be a right-winger -- does something terrible, we are often treated to knee-jerk media panic over conservative rhetoric and civility.  This pattern applies even when the perpetrator of the latest horror or ugliness turns out not to have any political motive whatsoever.  But let's say there is some discernible political line that can be drawn between ideology and action: Blaming partisan or ideological rhetoric for the terrible acts of lone individuals is still unfair demagoguery.  I've argued as much under circumstances when it would have been quite easy to score cheap points against the Left, applying their own unfair standards.  But if the Left insists on playing the 'words cause violence' game, whom should we blame for these appalling attacks against Sen. Susan Collins and her staff?  Via a New York Times story on the wild pressure campaign being waged against Collins in Maine:

The detail about the threats is buried within the article; you'd think it might be the lede.  It's one thing to effectively attempt to bribe Collins to vote a certain way; it's another to wish violence or sexual assault upon her and her team.  All because she appears ready to do what she always does, regardless of party: Vote for a president's SCOTUS nominee.  Kamala Harris has been leading the deceitful charge against Brett Kavanaugh, leveling bogus accusations that have been picked apart and thoroughly debunked by numerous fact-checkers.  Have her lies inspired the mob?  What about the unhinged rhetoric of Brian Fallon, the former Hillary Clinton flack whose nutty tweets have fanned the flames of hatred?  Who's to say that his words didn't contribute to rape threats?  The list of potential "suspects" is long.  Is this how this works, liberals?  And why stop at a former Hillary aide when you can cite the twice-failed presidential candidate herself?

When Kavanaugh called birth control "abortion-inducing drugs," he made it clear that safe and legal abortion isn't the only fundamental reproductive right at grave risk if he is confirmed. Access to birth control is, too.

She tweeted that today, after "False" and "Four Pinocchio" verdicts rained down on Harris for the exact same assertion.  How perfect for Hillary Clinton to arrive late to a provably dishonest claim, then advance the lie anyway.  But based on the Civility Police's rules, this isn't just mendacious and irresponsible, it could be dangerous.  Also, so long as lies like this are willfully and shamelessly deployed to attack conservatives, the Resistance should spare us all the concern-trolling lectures about Trump's disregard for the truth, and the absence of 'shared facts' these days.  Relatedly, for a good chuckle, click through and read about the absolute meltdown from Think Progress and their allies after getting (correctly) fact-checked by the Weekly Standard.  It seems truth must not be pointed out by right-leaning media outlets, you see, and some lies are righteous, so long as they're wielded against bad people who must be stopped.  It's the same ends-justify-the-means garbage they indignantly accuse Trump of (sometimes with good reason).  Meanwhile, here's another update on the civility/rhetoric front -- it's one that the mainstream media hasn't covered much nationally:

Out in California, a man is arrested after attacking a GOP candidate for Congress on account of his political beliefs. https://t.co/fPlpRAOyfc

A Castro Valley man shouting profanities about President Trump attacked a Republican congressional candidate who was working an election booth at a town festival, threatening him and trying to stab him with a switchblade, authorities and the candidate said Tuesday. Farzad Vincent Fazeli, 35, was jailed after the alleged Sunday attack on Rudy Peters at the Castro Valley Fall Festival. Alameda County prosecutors charged Fazeli on Tuesday with a felony count of making criminal threats and misdemeanor counts of exhibiting a deadly weapon and possessing a switchblade. No one was seriously injured. In an interview, Peters said he had never been concerned about his safety prior to Sunday, though his wife has often warned him to be careful.

A deranged leftist tried to stab a Republican Congressional candidate in public, and it's not national news.  I can't help but suspect that if the partisan roles were reversed, we'd be having a very intense "national conversation" about how Trump's words are putting people's lives in peril.  We'd see demands for denunciations from Republican leaders, and lots of thumb-sucking editorials and segments on shows like Reliable Sources.  Instead, relative crickets.  Funny, that.  And again I ask, based on the Left's cynical standards, whose rhetoric is to blame for this apparent attempted murder?  I'll leave you with this data point from the new (largely ugly for Republicans) CNN poll:

In a CNN/SSRS poll released today, opposition to Judge Kavanaugh’s nomination was statistically unchanged from their August poll (opposition dropped from 40 to 39).https://t.co/0fATDU7piF

Loads of fulminating, histrionics and deception amounted to...no change.  It's almost as if many people tune out the lunacy.