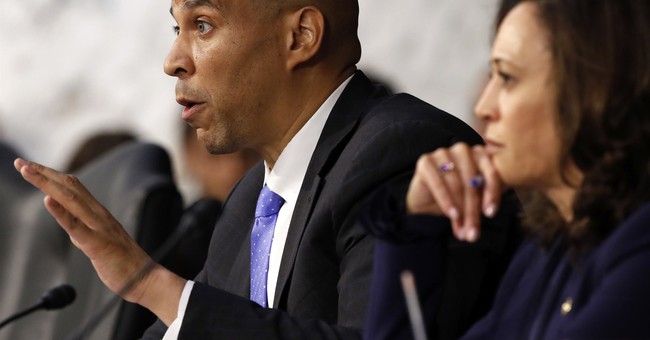 I stand w/ Judiciary Committee Democrats who are well within their rights to release these very important documents that a former Kavanaugh deputy designed as “committee confidential.”

The American ppl deserve to know the truth about Judge Kavanaugh’s record. #WhatAreTheyHiding?

[UPDATE - This is laugh-out-loud funny: Not only were the leaked confidential memos total duds (see Matt's post on racial profiling, and my further analysis on the Roe missive below), it turns out Booker's "brave" stand was a total farce.  He framed his release of these memos as a conscience-driven violation of Senate rules that could potentially result in discipline or expulsion -- but we're now learning that the memos' release was actually agreed to by Republicans last night...and Booker reportedly knew this fact.  Nevertheless, he showboated for the cameras as if he were risking something, entirely for political purposes.  He was risking nothing, while trying to play a martyr. What a ridiculous fraud].

It seems that there is no norm Senate Democrats are unwilling to ignore or upend in America's ongoing confirmation battles, so they are once again escalating unprecedented tactics and setting new precedents for fleeting political advantage -- in this case, for the sole purpose of scoring some weak points in a losing fight.  What could possibly go wrong?  One of the ironies of today's histrionics is that Democrats patted themselves on the back over their own supposed rebellious bravery for improperly disclosing confidential documents... literally one day after they spent quite a lot of energy trying (and failing) to link Kavanaugh to Bush-era incident in which other confidential documents were improperly disclosed.  I marveled at Sen. Leahy and Durbin's decision on that front because it only highlighted a disgraceful episode in which Democrats plotted to endlessly filibuster an exceptionally well-qualified judicial nominee they saw was "especially dangerous" explicitly because "he is Latino."

With the help of their media allies, Democrats turned that 2003 story into an outrageous scandal about document 'theft' (Democratic staff had inadvertently left their unprotected internal files on a shared server), rather than a story of a whistleblower uncovering an ugly, racially-motivated strategy.  As Democrats told it then, and still tell it today, that revelation of confidential documents was downright scandalous.  Today, however, Democrats are applauding the exposure of another sort of confidential memo, in direct contravention of Senate rules.  Why?  Oh, because it's 'civil disobedience' that serves the 'public interest.'  Was it not in the public interest to expose politicians conspiring to block a judicial nominee because of the color of his skin?  Or was that also somehow justified because conservatives are bad, and brown-skinned conservatives are viewed as unique threats to the leftist order?

By the way, relatedly, today's big "bombshell" development that one of the now-leaked memos revealed Brett Kavanaugh absolutely correctly stating a reality about Roe v Wade fizzled, with the nominee easily fielding and dispensing with Sen. Feinstein's question about it.  Another approach taken by certain Democrats on the panel has been to undermine, or openly reject, the legitimacy of Kavanaugh's nomination and even elements of the hearings themselves.  These folks wring their hands about President Trump undermining institutions and eroding norms, then they go ahead and say things like this:

Blumenthal, it must always be noted, actually does have a moral asterisk next to his own name: He's the guy who lied throughout his adult life and political career about serving in Vietnam -- until he was caught by the New York Times, then dutifully re-elected by the liberal voters of Connecticut.  Last but not least, we have Sen. Harris ominously asking Kavanaugh last night about whether or not he's conversed with anyone from a certain law firm (populated by hundreds of lawyers) about the Mueller investigation.  Here's the initial exchange, followed by an apparent update:

NEW: A senior administration official involved in the confirmation process tells me Kavanaugh reviewed a roster of @KasowitzLLP lawyers last night, and knew only one person at the firm. He has not discussed Mueller with that person, the official said.https://t.co/llYlRGofEa

Either Harris will provide explosive evidence of Kavanaugh misconduct and dishonesty later today, or her approach will be shown to be groundless demagoguery in service of a cynical, reckless fishing expedition.  Place your bets about which outcome is more likely.  Finally, because I've been harshly critical of nearly every Democrat on the Judiciary Committee, I thought I'd single out two members from that side of the aisle who've actually comported themselves like serious people:

Credit where it’s due: Senators Klobuchar and Coons distinguishing themselves as thoughtful non-clowns in these hearings.

I'll give Sen. Feinstein an honorable mention, too, despite her employment of a wildly inaccurate scare-tactic statistic about women who died from illegal abortions, as well as her confounding, terrible argument regarding firearms in "common use" in the United States.  For reasons we'll explore in greater depth, and barring something truly dramatic, Kavanaugh appears to be on a cruise course for confirmation -- likely with 55 or so votes.