CNN Poll: Overwhelming Majority of Americans Rate the US Economy Positively, And Yet... 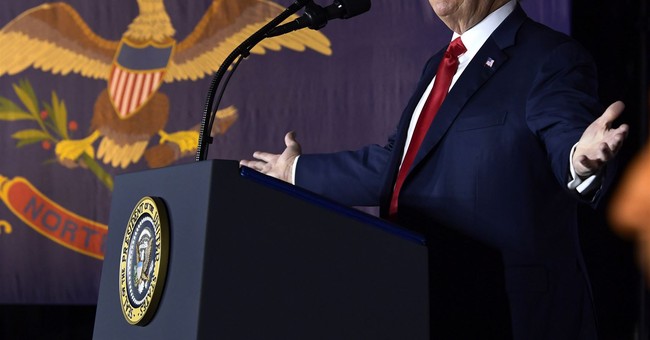 A new CNN poll contains a significant data point that ought to be very good news for President Trump and the Republican Party.  Under their stewardship, the US economy is thriving.  Americans recognize the progress and are increasingly inclined to credit the GOP for it.  In the new survey, fully 69 percent of respondents rate our economic state as good, a number that "has held roughly steady over the past few months. The share calling the economy "very good" has been inching up over that time and now stands at 26%, up 4 points since June and the highest since June 2000," according to network's accompanying write-up.  And yet, President Trump's job approval rating and personal favorability across numerous benchmarks have taken a relative plunge in recent weeks:

President Donald Trump's approval rating has fallen 6 points in the last month and stands at a new low among political independents, according to a new CNN Poll conducted by SSRS. Overall, just 36% approve of the way the President is handling his job, down from 42% in August. Among independents, the drop has been sharper, from 47% approval last month to 31% now...Just 32% say they see the President as honest and trustworthy, the worst read in CNN polling. About a third, 32%, say he's someone they are proud to have as President, down 6 points since March and the lowest since Trump took office. Only 36% say he "cares about people like you," another new low. Just 30% say he'll unite the country and not divide it, matching his previous low on that measure from November 2017. Four in 10 say the President can bring the kind of change the country needs, down 5 points from March and matching a November 2017 low...As on the President's approval rating, the shifts in Trump's favorability rating and attributes are driven largely by movement among independents.

Those bolded sentences are the worrisome bits for the GOP. Republican voters, by and large, strongly support the president; conversely, Democrats are overwhelmingly opposed to him. Shifts among partisans can be significant, as are intensity and enthusiasm gaps, which preview turnout disparities. But what could turn a modest blue wave into a major one is if independents decide to abandon the president's party in droves. And before you cry, "fake news CNN!" consider that we're seeing a pattern across multiple national surveys:

Trump approval is at 41-53 in our first six completed polls, or about 3000 interviews.
The districts voted for Trump by 5 points, with 49% of the vote. So his approval rating here is about 8 points behind his 2016 vote share, which one could roughly extrapolate to 38% nationally

I count... Eight... Count em eight live interview polls finished in the last 2 weeks... Each one has Trump's approval dropping from the last poll.

The RealClearPolitics average now shows Trump's job rating ebbing to its lowest mark in the last six months.  It's hard to pin down precisely what triggered this downtick, but considering that the president's numbers looked pretty stable after the Cohen and Manafort developments, it's not unreasonable to conclude that some combination of Trump's controversial response to John McCain's death, plus the sense of chaos painted by Bob Woodward's book and a much-discussed anonymous New York Times op/ed, are factors.  The bad news for Republicans in all of this is self-evident.  The good news is that even as the midterm elections draw ever closer on the horizon, sufficient news cycles still remain to reverse this apparent trend.  It is somewhat extraordinary for the economy to be in such strong shape, while the incumbent party is in such trouble.  One interesting piece of electoral wisdom I heard recently came from Steve Hilton, a longtime adviser in British politics.  He said that most voters won't cast ballots out of gratitude, even in the good times; an in-party presiding over prosperity must therefore draw a stark contrast between existing successes and looming failures if the other side takes control.

The GOP should take this lesson to heart, not just pointing out all of the overwhelmingly positive economic indicators, but warning that Democrats would seek to take away job-creating and household-helping tax cuts, reimpose growth-choking regulations, and even inflict stunning new tax hikes to pay for a disastrously expensive and disruptive healthcare scheme that they'll position as a "solution" to the healthcare cost crisis they exacerbated with their last failed experiment.  But yes, part of the strategy does require shouting achievements from the rooftops, in hopes that it breaks through over the din of other drama and controversy.  Here's one such example, which again shows important progress on wages -- one metric naysayers have seized on in recent months:

That improvement in take-home pay comes in addition to the broader gains on wages we chronicled on Friday, in the wake of the robust August jobs report. I'll leave you with a new GOP ad laying out a record of tax increases from Democrats' Senate nominee in Tennessee: