ICYMI: A Man Tried to Stab a GOP Congressional Candidate 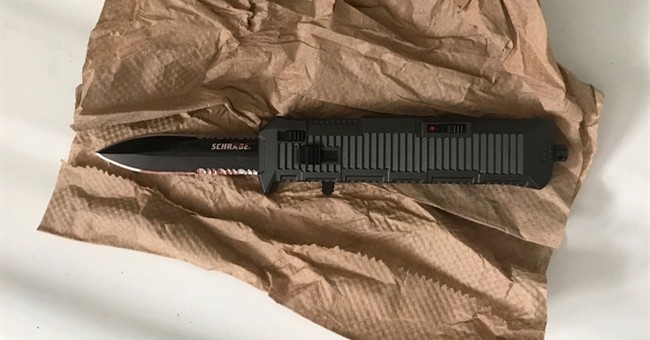 A California man attacked Rudy Peters over the weekend during a fall festival while yelling obscenities about President Trump.

Farzad Vincent Fazeli, 35, was arrested Sunday after he tried to stab the Republican congressional candidate with a switchblade.

According to witnesses and Peters, the assailant aggressively approached Peters at his booth and made “disparaging remarks” about the Republican Party and “elected officials,” the San Francisco Chronicle reports.

“All of a sudden we hear someone screaming, “F— Trump, f— Trump!” he said, recalling that the man gave them the finger while “standing right in front of the booth.”

Peters thought that was the end of it as the man seemed to walk away. He soon realized, however, that Fazeli turned around saying “I’ll show you,” and then ran toward the booth.

A physical altercation ensued between the two men.

The assailant then pulled out a switchblade and yelled that he was “gonna kill” Peters.

“He had the knife, but the blade wouldn’t shoot out,” explained Peters, who’s running against Democratic Rep. Eric Swalwell in California’s 15th Congressional District.

Swalwell condemned the attack on Twitter, saying it’s “NEVER okay to use violence to settle political disagreements (or any disagreement).

“On Sunday, my opponent @PetersCongress was attacked at his campaign booth in Castro Valley. I’m glad to hear Mr. Peters is okay,” Swalwell wrote. “But it’s NEVER okay to use violence to settle political disagreements (or any disagreement). Fortunately, @ACSOSheriffsarrested the suspect.”

On Sunday, my opponent @PetersCongress was attacked at his campaign booth in Castro Valley. I’m glad to hear Mr. Peters is okay. But it’s NEVER okay to use violence to settle political disagreements (or any disagreement). Fortunately, @ACSOSheriffs arrested the suspect.

As John Lott Jr. observed, this story would have been all over the mainstream news outlets if the party affiliations had been reversed.

If a Republican had tried to stab a Democratic congressional candidate, do u think that it would have gotten some media? Yet, this case of Democrat trying to stab a Republican appears to have gotten virtually no news media coverage outside of the SF Bay area (The Hill and WashEx) https://t.co/u6nYoVfD8w