Lies: The Kavanaugh Hearings Are Over, But the Left's Dishonest Smears Just Won't Stop 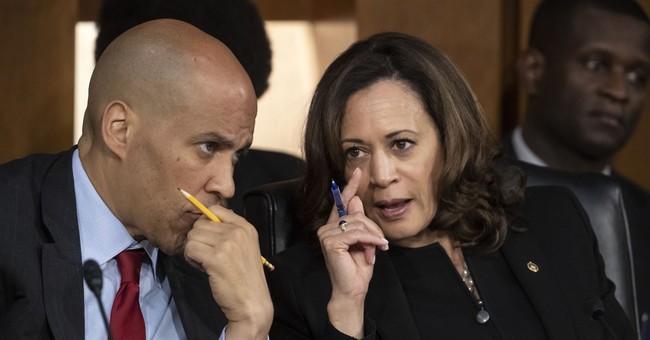 Brett Kavanaugh's Supreme Court confirmation hearings wrapped up last week, with an overwhelming consensus emerging that he'll be approved by the Senate in the days to come.  Furious, embittered leftists are not handling that reality well, however, and continue to launch misleading, tendentious and outright mendacious attacks against President Trump's eminently qualified nominee.  Among the smears is the claim that Kavanaugh perjured himself before the Senate Judiciary Committee, which some desperate critics are casting as grounds for impeachment.  I shared part of this reasoned dismantling of that narrative last week, but here are a few key details that help expose the "perjury" shouting as reckless nonsense.  The background here is that Kavanaugh is accused of being dishonest on two subjects, including when he told the committee during previous confirmation processes that he did not play a large role in the confirmation battle over another controversial Bush judicial nominee while he was serving in the White House.  Purveyors of this attack ignore crucial context, cherry-picking a single line that distorts Kavanaugh's truthful testimony:

4. Later in the same colloquy, Kavanaugh restated the point in slightly different words: "the way the work is divvied up, that wasn't one of the ones I" (and then he was cut off, but presumably he would have said something like "assigned" or "given"). #SCOTUS pic.twitter.com/dg6Et7rKOT

8. Kavanaugh explicitly ADMITTED, for example, that he might have attended a moot session for Pryor, and/or read & discussed news articles about the Pryor nom (but understandably didn't want to go into detail about @WhiteHouse internal deliberations). pic.twitter.com/K9nOo4uf2X

10. So, in conclusion, this "perjury" argument is without merit -- an unfair and unfounded attack against Judge Kavanaugh. Vote against him if you disagree with his jurisprudence, fine -- but please don't slander him. Thanks. #SCOTUS #KavanaughHearings

Yet the notion that Kavanaugh lied to the committee persists, in spite of evidence and context to the contrary, and is even being amplified by a supposedly 'serious' member of that panel (this is about a second subject):

Brett Kavanaugh used materials stolen from Democratic senators to advance President Bush's judicial nominees. He was asked about this in 2004, 2006 and this week. His answers were not true. https://t.co/YNYOyJUiDC

Those "stolen memos" were inadvertently left on a shared server, unprotected, during the Bush administration.  Republican staffers discovered them and leaked them to the Wall Street Journal and other media outlets.  Among other things, the files showed Democrats conspiring to block a judicial nominee -- at least in part -- because he had brown skin, and was therefore deemed "especially dangerous."  Kavanaugh didn't "lie" about that subject either (read that thorough debunking), just as he didn't "lie" about the topic addressed above.  Left-wing fringe groups are nevertheless trying to turn this into an impeachable offense, in a fit of desperate sore-loserdom.  One legal challenge that's seeking to chase this squirrel will reportedly be heard by none other than...Merrick Garland, who is nearly certain to smack it down as the frivolous garbage that it is, which  would be a delightful fate to befall those pushing this absurdity. Meanwhile, another Judiciary Committee Democrat (one who is unlikely to be mistaken for a serious person) is spreading a separate smear by passing off an incomplete clip as 'proof' that Kavanaugh believes birth control is tantamount to "abortion inducing drugs," and therefore wants to "punish" women:

Kavanaugh chooses his words very carefully, and this is a dog whistle for going after birth control. He was nominated for the purpose of taking away a woman’s constitutionally protected right to make her own health care decisions. Make no mistake - this is about punishing women. pic.twitter.com/zkBjXzIvQI

This is an ugly slander, and the evidence puncturing Harris' duplicity is all right here.  The California Senator omitted the words "they said," which make clear that Kavanaugh was summarizing the legal argument of one of the parties in the case.  In other words, he wasn't describing his own views; he was clearly and accurately describing someone else's.  Yet Harris, the professional Left, and -- of course -- many in the mainstream media, eagerly repeated this smear because it serves a partisan narrative.  Mild-mannered Republican pollster Kristen Soltis Anderson lambasted Harris and company for their deliberate deceit and galling hypocrisy:

In this clip, he is citing someone else’s position, not stating his own. I don’t want a single person who shared this clip to ever complain to me again about “oh why don’t facts matter anymore?”. Harris is choosing to lie here, period. https://t.co/mur5XXInUr

This was not an apology or correction, incidentally.  I'll leave you with a piece about a liberal law professor's valuable insights into what's going on here, which shed light on a larger truth: The objections to Kavanaugh, uniformly weak as they may be, aren't really about Kavanaugh's qualifications or character.  They're about blanket, reflexive opposition to any jurist who won't do liberal activists' bidding:

ICYMI: Liberal Law Prof. Akhil Amar: If Not Brett Kavanaugh, Then Who? https://t.co/CltbeeJXOI

Yale Law professor Akhil Amar urged members of the Senate Judiciary Committee on Friday  to confirm his former law student, nearly two months after penning an op-ed that described Trump’s choice of Kavanaugh as “his classiest move.” Amar described Kavanaugh as someone whose qualifications cannot be knocked. “Kavanaugh has studied the Constitution with more care, consistency, range, scholarliness, and thoughtfulness than any other sitting Republican federal judge under age 60,” said Amar, who voted for Hillary Clinton in 2106. Amar added, “He is the best choice from the long list of 25 potential nominees publicly circulated by President Trump.” ... “Don’t be mad. Be smart, and be careful what you wish for,” he warned, reminding Democrats they control neither the White House nor Senate. “If you torpedo Kavanaugh, you’ll likely end up with someone worse—less brilliant, less constitutionally knowledgeable, less studious, less open-minded, less good for America.”

But Peak Resistance practically requires being prizing "righteous" anger over all else -- and living in an alternate reality under in Trump is an illegitimate president, and anyone who isn't actively fighting him on everything is "complicit in evil," or some such rubbish.  Parting thought: Try, if you would, to imagine the derangement and vitriol that would accompany a third SCOTUS opening under this president, especially if a member of the reliably liberal bloc departs the court.  Think about the rage that would inspire in the minds of people like this former GOP operative turned hyperbolic leftist, who's now dumping on moderate Republicans for supporting a mainstream and unambiguously qualified SCOTUS nominee:

The point about Colin’s and Murkowski’s impending vote for Kavanaugh exposes them as titanic frauds who have gamed the choice issue for their personal benefit for decades. Sincere people have committed points of view on this difficult issue. These two are not amongst them .