Commentary: The Shooter Alone -- Not Politics, Not Rhetoric -- is Responsible 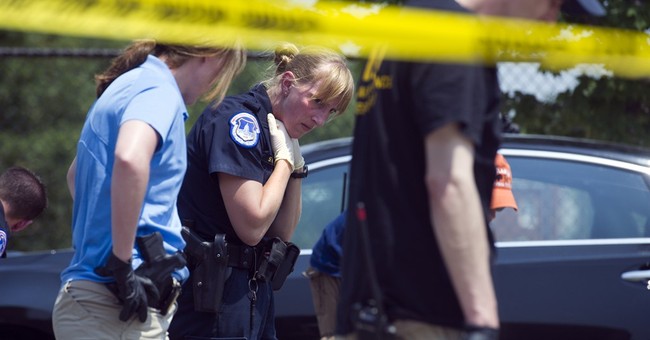 When Rep. Gabrielle Giffords was shot and seriously wounded outside of a supermarket in her Arizona district six years ago, some on the Left raced to pin the blame on conservatives.  It was our vitriolic rhetoric against President Obama and his party.  It was Sarah Palin's Congressional 'targets' map.  And it was the right-wing's "climate of hate," fomented almost exclusively by one political movement, according to a prominent New York Times columnist:

When you heard the terrible news from Arizona, were you completely surprised? Or were you, at some level, expecting something like this atrocity to happen? ...there’s not much question what has changed...it’s the saturation of our political discourse — and especially our airwaves — with eliminationist rhetoric that lies behind the rising tide of violence. Where’s that toxic rhetoric coming from? Let’s not make a false pretense of balance: it’s coming, overwhelmingly, from the right. It’s hard to imagine a Democratic member of Congress urging constituents to be “armed and dangerous” without being ostracized; but Representative Michele Bachmann, who did just that, is a rising star in the G.O.P.  And there’s a huge contrast in the media...So will the Arizona massacre make our discourse less toxic? It’s really up to G.O.P. leaders. Will they accept the reality of what’s happening to America, and take a stand against eliminationist rhetoric? Or will they try to dismiss the massacre as the mere act of a deranged individual, and go on as before?

This was, and is, nonsense.  Ironically, the same column could be rewritten today, just with the party roles reversed. Counter-examples of phrases and exhortations that might be construed as "eliminationist," or supportive of violent upheaval, abound.  Indeed, by casting Republicans as willfully feeding into a dangerous climate, one could use Paul Krugman's own standards to allege that his essay blew dogwhistles that helped lay the foundation for his more radical readers taking matters into their own hands to quell the 'threat.'  See how this can work, professor?  Of course, as it turned out, Krugman's whole thesis was bogus.  Giffords' would-be assassin (she survived, unlike six other innocent bystanders) was actually a largely apolitical paranoid schizophrenic who rarely paid attention to the news.  He and his mental illness were to blame for the atrocity, not politics.

But in the early stages of that investigation, it was unclear what the suspect's motivations might have been.  A distinct possibility still existed at the time that he was a politicized extremist who had snapped.  Many of us argued then, and have ever since, that regardless of that outcome, rhetoric did not do the killing.  Jared Loughner did.  Leftists who were misappropriating and socializing blame were engaged in hysterical or calculated demagoguery and demonization.  The goal: Tarring the entire center-right as "hateful" in order to chill speech and delegitimize their political goals.  Far too much of the media amplified or parroted this line, and by the time the fundamental inaccuracy of the Krugman narrative was exposed, the damage had been done.  The "greater truth" had won out.  Many Americans still misremember the incident as a political shooting.  Mary Katharine Ham and I recapitulated these facts with great frustration in our 2015 book, End of Discussion, identifying the episode as a paradigmatic example of cynical, detestable silencing.

Which brings us to this morning, when a left-wing progressive -- who volunteered for Bernie Sanders and bitterly loathed both President Trump and Republicans generally -- shot five people at a baseball field where the GOP's Congressional baseball team was practicing.  Among the wounded is House Majority Whip Steve Scalise.  But for the grace of God, and the unfathomable courage of Rep. Scalise's security detail, this could have been a mass murder.  The assembled players, staff, and family members were unarmed and penned inside a gated field.  If not for the Capitol Police returning fire and taking out the shooter, the targets would have been defenseless against the rifle-wielding fanatic, who reportedly had a large cache of ammunition on his person.  (In case you were wondering, this individual had a legally-obtained firearms license issued by his home state of Illinois, known for its restrictive gun laws).  In a bit of turnabout, some on the Right have been quick to point fingers at the Left.  But rhetoric did not do the shooting.  James Hodgkinson did.  And as it has in the wake of other violent attacks, this statement remains true:

You are responsible for inciting violence if you actually incite or organize or bless violence. Otherwise, not. True under Obama, true now.
— Ross Douthat (@DouthatNYT) June 14, 2017


I'll concede that it's beyond maddening to watch large elements of the Left routinely attribute horrible acts to conservatives as a whole, even when the actual perpetrators end up having zero affiliation with the political Right.  It's not uncommon.  It's also deeply frustrating to witness many in the media downplay and ignore acts of political terrorism or despicable bloodshed that are confirmed to have been carried out by leftists, sometimes for explicitly political reasons.  There is an undeniable double standard at play, so I'm sympathetic to the line of thinking that some on the hard Left must be held to their own ugly standards and tactics if they're ever going to learn lessons or modify their behavior.  But I don't believe that escalating unjust demagoguery will reform anyone's conduct for the better; it will further institutionalize it as the norm, and will inevitably devolve further.  And by stooping to these lows -- rationalized and justified as retaliation against previous slanders -- conservatives begin to forfeit the ability to credibly and righteously object the next time our opponents play this sordid card.  As such, I reject this type of attitude:


Political debate and institutions are the means through which a civilized society addresses its differences in order to avoid violence and "war."  The collective punishment inherent in tit for tat, guilt-by-association battles is not "winning;" America loses when terrible methods are mainstreamed and accepted.  That being said, do I believe that thoughtful liberals ought to consider the potential consequences of beyond-the-pale arguments, such as the oft-repeated charge that Republicans actively want to kill people through their policies?  I do.  Some of the vilification and dehumanizing discourse that surround our politics is out of hand, and perhaps the out-of-power party is typically more prone to such unhinged shouting.  Each side must self-police, and work to reign in its own worst rhetorical excesses, even -- or especially -- when tensions run high around difficult debates.  I also firmly believe that the Left must forcefully stamp out the growing belief among some in their coalition that "hateful" words or votes are akin to violence, and therefore violence is an acceptable response.  This concept is taking root on college campuses and among various strains of so-called "social justice warriors."  It normalizes the idea of force and physical coercion as a permissible response to offense or grievance.  Liberals must grapple with his problem.

Ultimately, however, using the heinous actions of a disturbed person as a cudgel against millions of law-abiding citizens who may share some of his political views is unfair and wrong.  If the pitched ideological battles of the day "require" a dumb, demagogic American circular firing squad, count me out.  On a more uplifting note, I'll leave you with two powerful images of shared humanity and values on a dark day in Washington.  First, a photograph of Democrats' baseball team huddling in prayer on behalf of their Republican colleagues, followed by Sen. Sanders (who has been pretty good on some free speech issues, even as his rhetoric at times veers into "eliminationist" territory) unequivocally denouncing and disavowing all forms of political violence:


Tomorrow night's charity Congressional baseball game will go on as planned.  This is exactly the right decision, and I hope Washingtonians set an attendance record -- both out of solidarity, and for great causes.  A moment of unity and perspective may yet emerge from this terrifying ordeal.  Play ball.