Disaster: Obama's 'Smart Power' Syria Policy Was a Catastrophe, and Trump is Trying to Clean Up the Mess 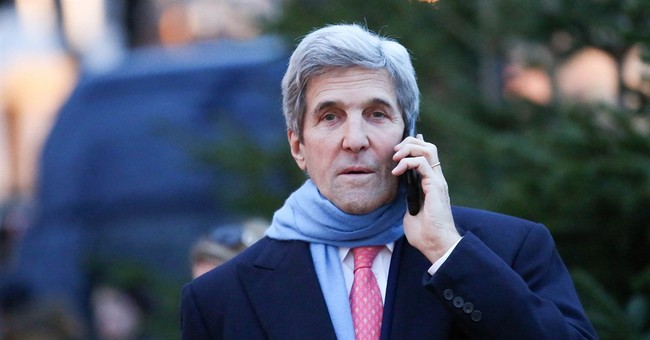 The wages of the Obama administration's shambolic foreign policy on Syria were felt again over the weekend, as dozens of Syrians in a rebel-held city -- including young children -- were gassed to death in a horrifying apparent chemical weapons attack.  The New York Times reports that the slaughter appears to have helped the Assad regime consolidate its lethal grip on power, which drew both harsh condemnation from most of the international community, as well as typical lies and excuses from the usual suspects:

Dozens of Syrians choked to death after a suspected chemical attack struck the rebel-held suburb of Douma, east of Damascus, with aid groups on Sunday blaming President Bashar al-Assad’s government for the assault and Western governments expressing outrage. Rescue workers in Syria reported finding at least 42 people dead in their homes from apparent suffocation, and antigovernment activists circulated videos of lifeless men, women and children sprawled out on floors and in stairwells, many with white foam coming from their mouths and nostrils. A stream of patients with burning eyes and breathing problems were rushed to clinics after the attack at dusk on Saturday, medical and rescue groups said. The attack appeared to break the will of Douma’s rebels, who agreed on Sunday to a deal with the government to hand the area over and be bused to another area outside government control in the country’s north. Thousands of fighters and tens of thousands of their relatives are expected to leave soon. The latest atrocity in Syria’s agonizing seven-year civil war drew immediate condemnation from the United States and the European Union, but Mr. Assad’s allies in Moscow and Tehran dismissed allegations of a chemical attack as “bogus.”

The Times' story notes that the Syrian regime's action, bolstered by Assad's backers in Moscow and Tehran, places President Trump in a challenging spot: "A new, confirmed chemical attack in Syria would pose a dilemma for President Trump, who ordered military strikes on a Syrian air base after a chemical attack last year to punish Mr. Assad but has more recently said he wanted to get the United States out of Syria." Indeed, the president was "handed a mess" by his predecessor.  Trump took to Twitter to blast Assad's latest atrocity on Sunday, raising eyebrows by also condemning Vladimir Putin by name for the first time in this forum:

What's the "big price"?  People are speculating about additional sanctions against Russia (the Trump administration just recently expelled dozens of Russian diplomats from the United States and imposed biting sanctions against Kremlin-connected oligarchs in response to other elements of Moscow's brazen acts), and potential airstrikes against Assad's military.  Here's the Secretary of Defense pointedly refusing to rule out military action, and also turning up the heat on the Russians:

Mattis, at the Pentagon this morning, when asked if he can rule out launching airstrikes in Syria against Assad:

“I don’t rule out anything right now."

MATTIS ON SYRIA: "1st thing we have to look at is why are chemical weapons still being used when Russia was the framework guarantor of removing all of the chemical weapons?
"Working with our allies and partners--from NATO to Qatar and elsewhere--we are going to address this." https://t.co/bPRBYOhhPI

Some Syrian military targets have already been bombed, evidently by the Israelis, leading some analysts to conclude that this was the first stage of a one-two punch -- with the US preparing to deliver the second, harder blow.  It's true that Trump wants to disengage from Syria, but he's also done more to enforce President Obama's catastrophically failed "red line" warning about the use of chemical weapons than Obama himself ever managed to muster.  Mattis' reference above is to the Obama/Kerry accidental policy of 2013, in which the US flailingly signed onto Moscow's unserious proposal to guarantee that Assad was disarmed of all chemical weapons, as a means of avoiding US military action.  This transparent sham (which started with a gaffe) was hailed as a diplomatic breakthrough by members of the 'Smart Power' echo chamber, who went on to cheer the supposed development that Syria and Russia had 'followed through' on the terms of the agreement.  This was all highly dubious at the time.  It's downright cringe-worthy in retrospect:

But then more chemical attacks took place, leading even John Kerry to admit on several occasions that his policy had failed.  Because it had.  Relatedly, Jim Geraghty flags an recent column written by then-private citizen John Bolton about Assad's alliance with another global menace:

Security Council weapons inspectors monitoring North Korea’s compliance with United Nations sanctions have reportedly concluded that, for several years, the North has been selling Syria materials for the production of chemical weapons. Additional sanctions violations also are reported, but none compare to the gravity of this evidence that Pyongyang is trafficking in weapons of mass destruction (WMD) technology. Pyongyang’s dangerous behavior today dramatically foreshadows exactly what it will do with nuclear and ballistic-missile technology as soon as it thinks it is safe to do so. The U.N. report and other sources also indicate considerable involvement by Iran, China and Russia in financing and transporting North Korea’s chemical and other weapons-related materials to Syria. The complex web of business dealings shows serious, perhaps insoluble, problems in the enforcement of international sanctions applicable to both Pyongyang and Damascus.

Bolton is now imbued with a lot more power than he was as a commentator, and perhaps the Kim regime may be willing to engage in serious talks because they're starting to realize that the Obama-era policy of do-nothing "strategic patience" is over.  One this is certain: Quite a number of bad actors scattered across a handful of capital cities around the world will be paying very close attention to the Trump administration's actions over the coming days.  I'll leave you with this thought: In the montage embedded above, then-Secretary of State John Kerry touted his disastrous Syria "deal" as a huge win, boasting, "we struck a deal where we got 100 percent of the chemical weapons out."  This is the same man who negotiated the Iran nuclear deal.  Who's feeling reassured?