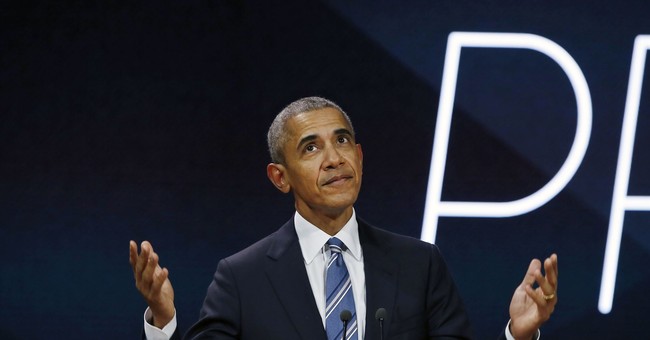 As word spread of Syria's alleged used of chemical weapons on its own civilians, conservatives and political commentators were quick to point out that former President Obama had several opportunities to intervene and potentially save countless lives from poisonous gas attacks in the Middle East country. Tommy Vietor, National Security Council spokesperson during the Obama administration, tried to beat back claims that President Obama was unsuccessful in deterring Bashar al-Assad's regime from killing his own people. But in doing so, Vietor ended up admitting that his old boss did not exactly leave Syria better off than when he found it.

It all started when commentators found an old tweet of Vietor's  published on October 31, 2013. It praised the progress towards eliminating Syria's chemical weapons as "remarkable." The tweet linked to a New York Times article titled, "Syria Destroys Chemical Sites, Inspectors Say."  The article wrote, "Syria's ability to produce chemical weapons has been destroyed and its remaining toxic armaments secured"...." President Bashar al-Assad has offered unexpectedly robust cooperation, at least so far, with  a Russian United States accord to dismantle arsenal."

The progress that's been made towards eliminating #Syria's ability to use chemical weapons is remarkable: http://t.co/8s7VqWqqcZ

Clearly, however, not all of the chemical weapons were destroyed. Something that Vietor admitted. But he tried to diffuse that tweet as a simple "gotcha" throwaway tweet.

"Republicans and a very dumb columnist are resurfacing this tweet like it’s a gotcha. Shipping out 1300 metric tons of weapons-grade chemicals was a major development. Obviously they didn’t get it all. Chlorine wasn’t covered," Vietor lamented.

But, on his final note, he had a bit of a slip of the tongue. "Trump was handed a mess but also hasn’t deterred Assad," he said.

Republicans and a very dumb columnist are resurfacing this tweet like it’s a gotcha. Shipping out 1300 metric tons of weapons-grade chemicals was a major development. Obviously they didn’t get it all. Chlorine wasn’t covered. Trump was handed a mess but also hasn’t deterred Assad

That last remark did not go unnoticed by commentators.

One Twitter use noted that Tommy is the same fellow who told Brett Baier "Dude, this was like two years ago," when questioned about the specific word choices regarding the Benghazi embassy attack.

DUDE! give it a rest and crawl back under your rock. Your 15-minutes was up a while back.https://t.co/IMrhUtH5C2

But to make matters worse for Tommy Vietor, the "mess" that he refers to is what his former boss called one of his proudest moments. Specifically, President Obama was most proud that he chose not to intervene after saying that use of chemical weapons by Syria would be "crossing a red line." Syria later used chemical weapons on his watch, and Obama refused to militarily intervene. In a 2016 interview with The Atlantic, he says he was satisfied with the result of his actions because it bucked the "Washington playbook" and he truly thought it was the right decision.

"John Kerry today expresses no patience for those who argue, as he himself once did, that Obama should have bombed Assad-regime sites in order to buttress America’s deterrent capability. “You’d still have the weapons there, and you’d probably be fighting isil” for control of the weapons, he said, referring to the Islamic State, the terror group also known as isis. “It just doesn’t make sense. But I can’t deny to you that this notion about the red line being crossed and [Obama’s] not doing anything gained a life of its own.”

Obama understands that the decision he made to step back from air strikes, and to allow the violation of a red line he himself had drawn to go unpunished, will be interrogated mercilessly by historians. But today that decision is a source of deep satisfaction for him.

“I’m very proud of this moment,” he told me. “The overwhelming weight of conventional wisdom and the machinery of our national-security apparatus had gone fairly far. The perception was that my credibility was at stake, that America’s credibility was at stake. And so for me to press the pause button at that moment, I knew, would cost me politically. And the fact that I was able to pull back from the immediate pressures and think through in my own mind what was in America’s interest, not only with respect to Syria but also with respect to our democracy, was as tough a decision as I’ve made—and I believe ultimately it was the right decision to make.”

This was the moment the president believes he finally broke with what he calls, derisively, the “Washington playbook.”

“Where am I controversial? When it comes to the use of military power,” he said. “That is the source of the controversy. There’s a playbook in Washington that presidents are supposed to follow. It’s a playbook that comes out of the foreign-policy establishment. And the playbook prescribes responses to different events, and these responses tend to be militarized responses. Where America is directly threatened, the playbook works. But the playbook can also be a trap that can lead to bad decisions. In the midst of an international challenge like Syria, you get judged harshly if you don’t follow the playbook, even if there are good reasons why it does not apply.” (emphasis added)

But, after that decision, Syria clearly never got rid of all their chemical weapons. As a result, President Trump is now stuck figuring out the mess" he inherited from his predecessor. Still, some Republicans would agree that the current president has not slowed down Assad's brutality. Sen. John McCain went so far as to say President Trump "emboldened"  Syria. Whatever the case, President Obama's actions clearly did not sufficiently help the situation.