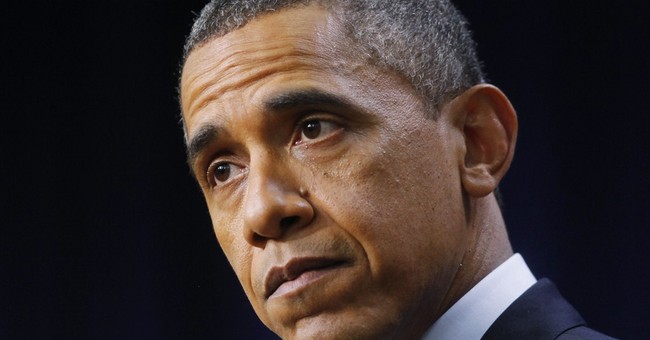 Don't interpret my use of 'impotence' in the headline as I signal that I'm longing for US intervention in Syria. There are very few freedom-aligned actors in that country, and even some of the "good" rebels have been co-opted and disarmed by Al Qaeda types.  Staying out of this heinous civil war, despite the heart-wrenching humanitarian implications, is probably the right call.  But that wasn't the administration's position one year ago (and beyond), via Allahpundit and the Washington Institute's Aaron Zelin:

No coincidence that Assad uses chemicals weapons on the one year anniversary of Obama's "red line" comment.

Here is video of the president's remarks at the time.  Let him be clear:


"We have been very clear to the Assad regime...that a red line for us is if we start seeing a whole bunch of chemical weapons moving around, or being utilized."


In geopolitical parlance, "red lines" are established ultimatums or rubicons; if breached, real consequences ensue.  The White House warned Iran's puppets in Damascus that if they used chemical or biological weapons in their fight to cling to power, the US would take military action.  As evidence emerged that such weapons had been deployed in the conflict -- and it became clear that our "friends" in Moscow were determined to actively prop up Assad -- President Obama sheepishly and incoherently backed down from its own red line.  Whether or not one backs US action in Syria (and the vast majority of Americans do not), the spectacle of a president abandoning his own "red line" damages US credibility, particularly among those who only respect strength.  Zelin implies in his tweet that Assad deliberately selected the one-year anniversary of Obama's admonition to highlight American weakness.  Whatever Assad's motives, he certainly made a statement:

U.S. intelligence officials and outside experts are looking into claims of a new and massive chemical weapons attack that's left hundreds dead. From the limited evidence they've seen so far, those reports appear to be accurate. And that would make the strike on the East Ghouta region, just east of Damascus, the biggest chemical weapons attack in decades. The early analysis is based on preliminary reports, photography and video evidence, and conclusions are prone to change if and when direct access to the victims is granted. Over the past nine months, the Syrian opposition has alleged dozens of times that the Assad regime has attacked them with nerve agents. Only a handful of those accusations have been confirmed; several have fallen away under close scrutiny. But Wednesday's strike, which local opposition groups say killed an estimated 1,300 people, may be different. "No doubt it's a chemical release of some variety -- and a military release of some variety," said Gwyn Winfield, the editor of CRBNe World, the trade journal of the unconventional weapons community.

Russian officials, predictably, are muttering that the attack was "staged," thus forecasting a UN Security Council veto if the vaunted "international community" attempts to act.  (Obama's new UN Ambassador couldn't be bothered to attend the emergency session). Our influence in Egypt is dwindling, our "reset" and other pandering to Moscow has been embarrassingly fruitless, and we're ignoring our own warnings to outlaw regimes.  In short, this administration's foreign policy, to the extent that it exists, lies in shambles.  I'll leave you with a memorable insight from a woman who will likely week to become Obama's successor, and who will undoubtedly cite her experience as the nation's top diplomat as a feather in her cap.  Smart power: