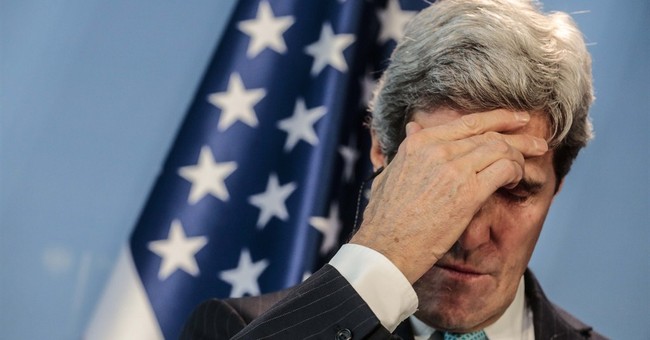 This reality was plain as day when the initial deal was first struck after John Kerry accidentally blurted out an idea that went from being instantly walked back by the Obama administration to official Obama administration policy in a matter of hours. Assad and Putin recognized the stumble as an opportunity and seized it, and President Obama -- desperate for any escape hatch from his "red line" ultimatum -- decided to play along, which only came at the price of being humiliated on the world stage. Then came the news in late December that Syria was far behind schedule in meeting its initial deadline to turn over its illegal chemical weapons cache, per the "breakthrough" agreement. Now, in a significant scoop from the Daily Beast's Josh Rogin, Sec. Kerry is reportedly admitting behind the scenes that the administration's entire Syria policy has failed in discussions with members of Congress. Ladies and gentlemen, I give you "smart power:"

In a closed-door meeting, two senators say, the Secretary of State admitted to them that he no longer believes the administration’s approach to the crisis in Syria is working. Peace talks have failed, he conceded, and now it's time to arm the moderate opposition—before local al Qaeda fighters try to attack the United States. Secretary of State John Kerry has lost faith in his own administration’s Syria policy, he told fifteen U.S. Congressmen in a private, off-the-record meeting, according to two of the senators who were in the room. Kerry also said he believes the regime of Bashar al Assad is failing to uphold its promise to give up its chemical weapons according to schedule; that the Russians are not being helpful in solving the Syrian civil war; and that the Geneva 2 peace talks that he helped organize are not succeeding. But according to the senators, Kerry now wants to arm Syria's rebels—in part, to block the local al Qaeda affiliates who have designs on attacking the U.S.


The story goes on to describe the (somehow) deteriorating situation on the ground in Syria:


Kerry’s private remarks were a stark departure from the public message he and other top Obama administration officials repeatedly have given in public. Shortly after the meeting ended, Sens. Graham and John McCain described the meeting to The Daily Beast, The Washington Post, and Bloomberg View. Given newly-released intelligence on the growing al Qaeda presence in Syria, as well as shocking new evidence of Syrian human rights atrocities, the senators said they agreed with Kerry that the time had come for the United States to drastically alter its approach to the Syrian civil war....Kerry confirmed new testimony by Director of National Intelligence James Clapper, who told Congress last week that al Qaedas affiliates in Syria “have aspirations for attacks on the homeland.” ... McCain and Graham also said they share Kerry’s assessment that the U.S. must take steps to address the growing al Qaeda presence in Syria, which Clapper said now amounts to over 26,000 extremists on Syrian soil...The lawmakers also said that newly released evidence showing the torture and apparent starvation of as many as 11,000 civilians by the Syrian government might be enough to persuade the White House to change course in Syria, as Kerry said he wanted.


So we struck a bogus "deal" that isn't working, affording Assad's Iran-backed regime more time to torture and kill its people, and allowing Al Qaeda affiliated rebels to grow in numbers in influence. Terrific. Now, according to our intelligence community's analysis, the jihadist opposition movement in Syria is splitting its attention between overthrowing Assad and plotting terrorist attacks on the US homeland. "Changing course" in Syria would entail the White House revisiting the military intervention option the president hoped to avoid, as public opinion and Congressional sentiment never lined up behind his ineffectual PR push. The last thing the president's political team wants is another national debate over an unpopular potential war. The public has already lost confidence in Obama's leadership, and the "red line" has been reduced to a meaningless rhetorical flourish. Americans are also deeply skeptical of arming any Syrian rebels, perhaps because of stories like this and this. The Obama administration has four primary options on the table, as I see it:

(1) Launch military strikes against Assad without Congressional approval (if it's a zero-sum power struggle in Syria, wouldn't this empower the Al Qaeda types who also want to kill us?), (2) seek a Congressional vote on a military action (and risk a likely replay of this slow-motion embarrassment), (3) arm the "good" rebels, and hope for the best (gulp), or (4) do little-to-nothing, while indulging the Putin/Assad playbook charade. That final option wouldn't halt or reverse the slaughter, wouldn't send a message to Iran, and may allow the ascendant jihadists to gain a bigger stronghold in the country. It would also be the least politically-damaging choice, at least in the short term. One wonders which door Team Smart Power will choose. Oh, and speaking of Iran, as one international agreement with an Middle Eastern enemy is disintegrating, the administration is seeking another deal with an even more dangerous foe. And they're siding with Iran against a bipartisan majority in Congress (with Harry Reid's help), which wants to threaten Tehran with additional sanctions if they fail to reach an agreement, or cheat. Weak leadership and an incoherent foreign policy have real consequences for our standing in the world and our national security, even if the president tries to insist otherwise. The White House is hoping that people don't care enough to pay attention to what's happening. That may be safe political bet -- unless and until we're attacked again. I'll leave you with this sharp analysis from the smartest lady on the planet: