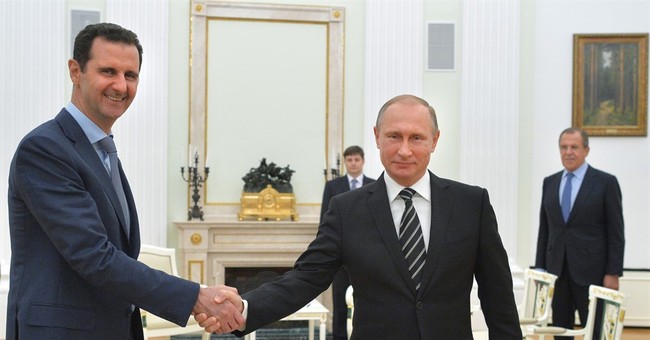 By now, you know the basics: President Obama issued a 'red line' warning to the Syrian regime against the use of chemical weapons -- an admonition that was promptly, willfully and repeatedly ignored.  Assad's acts of brazen and barbaric defiance resulted in...nothing from the White House, not even an "unbelievably small" military response, which Congress appeared poised to reject anyway. Obama's failed approach to the no-win Syria conflict grew worse when then-Secretary of State John Kerry gaffed his way into a fanciful new US policy under which Assad and his patrons in Moscow agreed to remove "all" of Syria's chemical weapons stockpiles in order to stave off any potential international consequences. This deal was hailed as a grand diplomatic accomplishment, but has consistently been exposed as a sham. Just this past weekend, former Obama Defense Secretary Leon Panetta said the gap between the former president's bellicose rhetoric and feckless inaction sent a "message of weakness to the world."

Quite right.  It turns out that the Butcher of Damascus -- to the shock of only the most naive, credulous, or disingenuous global actors -- is not a man of his word. Syrian forces continued to use the weapons they'd sworn they'd given up, eliciting more scolding from Washington, but not much else. Kerry all but indicted his own accidental policy a dismal flop. The latest Sarin gas attack, for which President Trump finally retaliated, once again underscored the reality that Assad had very obviously not declared or handed over his full arsenal of illegal weapons of mass destruction, earning officials from the previous administration a flurry of new 'Pinocchios' from responsible fact-checkers who don't  routinely embarrass themselves. To put an even finer point on the scope of this policy crash, a former Syrian general who defected to the West tells the UK Telegraph that Assad retained "hundreds of tons" of the deadly materials he pretended to renounce and abandon in 2013:

Assad had agreed to turn in his entire chemical weapons inventory in 2013 when the US threatened military action after hundreds were killed in a deadly chemical attack on opposition-held suburbs of Damascus. But Sakat, who was head of chemical warfare in the Syrian army’s Fifth Division, has long claimed that Assad secretly held on to much of his stash. And after an April 4 suspected chemical attack killed at least 87 people, the defector has said the regime still has hundreds of tons of chemicals at hand. “They admitted only to 1,300 tons, but we knew in reality they had nearly double that,” Sakat told the Telegraph. “They had at least 2,000 tons. At least.” Sakat said that according to his contacts inside Syria, Assad has not manufactured new weapons since 2014, but “they don’t need any more, they have all they need already.” ... Hamish de Bretton-Gordon, the former commander of the UK’s Chemical, Biological, Radiological and Nuclear (CBRN) Regimen, said Sakat’s claims of Assad’s retained stockpiles were “plausible.” He told the Telegraph that the recent alleged chemical strike on the town of Khan Sheikhoun appeared to use old sarin gas.

Even if you're not inclined to take the word of a former Assad commander at face value (he also claims that he switched out chemical weapons for harmless substances after being ordered to gas civilians), the regime's recent actions at least verify a key element of what Sakat has been saying for years.   Relatedly, The Atlantic published a lengthy piece last week chronicling the inevitable collapse of the Obama/Kerry chemical weapons agreement with Assad, highlighting "Syrian deception, Russian duplicity, and American dithering:

That agreement went a long way toward achieving its goal, namely through the removal from Syria of 1,300 metric tons of weapons-grade chemicals—including ingredients for the nerve agents sarin and VX—as well as the destruction of chemical munitions, labs, and mixing equipment. Obama and then-Secretary of State John Kerry hailed the deal as a major victory in the battle to rid the world of especially horrible weapons of mass destruction that even the worst combatants of World War II had refrained from using on the battlefield. But for all its achievements, the agreement and its implementation mechanism were deeply flawed, and its collapse was announced with a big bang when 59 Tomahawk cruise missiles hit their targets at the Shayrat air base in Syria’s Homs governorate, from which last week’s sarin attack is believed to have been launched. There were many technical reasons for the deal’s failure, most having to do with the deception and subterfuge of the Syrian regime. But the main reason Assad did not fully implement the agreement was political. At Russia’s insistence, the deal did not allow for the use of force or the automatic imposition of sanctions even in the event of Syrian violations—depriving Obama of a credible threat of force against Assad. It’s now clear that, in the absence of such a threat, Syria had no incentive to comply.

And so they didn't, and they continue to carry out atrocities under the protection of -- and sometimes with direct assistance from -- the Kremlin to this day. Regardless of what one thinks of Trump's military action against the Syrian airbase from which the latest chemical attack is believed to have been launched (I believe that a limited strike aimed at reinforcing international norms on WMD usage was appropriate and within the president's authority, but that any significant escalation of US involvement requires serious thought at the approval of Congress), it at least disrupted a lethal pattern of predictable, feeble, ramification-free affronts from Assad. It also scrambled expectations in Moscow, where top officials famously preferred Trump to Clinton during the campaign. Now Putin and friends aren't quite sure what to make of the American president whose victory they reportedly cheered. On the campaign trail, Trump vowed to baffle and frustrate America's adversaries with unpredictability. The Russians have gotten a startling dose of exactly that over the past two weeks:

"What the strike did do was radically alter the power dynamic between Moscow and Washington." ~@juliaioffe https://t.co/STeAcKOf1k


Whether Trump's apparent about-face on foreign policy was planned all along, arrived gradually, or is rooted in the president's capricious, news-driven instincts does matter, of course, but on some level, it's immaterial. The bombings he's ordered in Syria (plus a dramatic show of force in Afghanistan) almost certainly have the tyrants in Pyongyang, Tehran and elsewhere wondering what on earth to expect from the new administration. There are risks inherent in that sort of uncertainty, to be sure, but many Americans and allies definitely do not see it as an altogether bad thing.