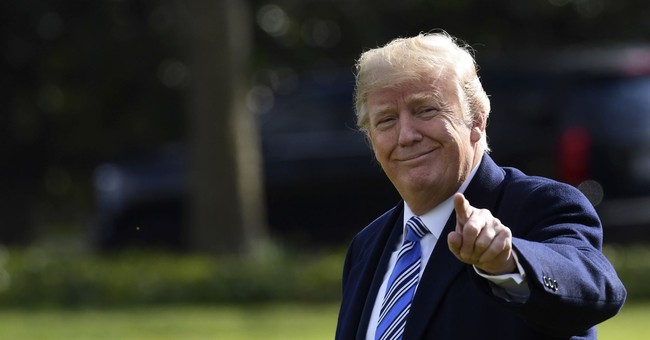 Let's start with the good news for Republicans in the latest Fox News national survey, conducted by the network's respected, bipartisan pollster.  First, the president's job approval rating sits at (45/52), which isn't much to write home about, but is still an improvement over his first year nadir in the mid-to-high 30's.  Second, he's above water on his handling of the US economy, hitting a (51/44) majority.  By a bigger margin (51/32), Americans say they're feeling more optimistic about their family's financial situation now than they were a year ago.  This aligns with other metrics pointing to a rosier economic outlook.  Third, thanks to tax reform, his marks on that issue have surged 16 net points since late 2017 to a respectable (48/46).  And then there's this:

The 2018 generic ballot has trended back toward the GOP, w/ the in-party's deficit averaging in the mid-single-digits: pic.twitter.com/h875DTLRZA

Many in the media pounced on the NBC/WSJ polling series' recent data point showing Democrats bouncing out to a ten-point lead on the Congressional ballot -- so at first, I wondered if the Fox number was an outlier.  It turns out that NBC/WSJ actually appears to be the outlier, with Fox's numbers mirroring findings from Marist, Quinnipiac (whose results have been heavily anti-Republican lately) and YouGov/Economist.  Reuters/Ipsos shows the partisan split even closer.  That's a lot better than things have looked for the GOP in some time, despite some negative numbers in the Fox survey: Namely, that the president is underwater on every other issue polled, and that Americans have taken a pro-gun control turn on a number of policy proposals -- with respondents splitting (40/53) when asked whether protecting gun owners' rights or protecting people from gun violence should be more important to lawmakers.  A 54-percent majority say that passing stricter gun laws will make no difference or make the country less safe (an anti-gun control shift in the series), but more people worry worry that any Congressional action on the matter won't go far enough, as opposed to going too far.  But big picture, heading into the fall elections, both of these statements are accurate:

That said, the undecideds probably disproportionately disapprove of the job POTUS is doing, and seem likely to break D.

Trying to predict how the electorate will be feeling seven months from today is a fool's errand, so Republicans shouldn't take too much solace in their (currently) improved fortunes.  In 2006, a handful of polls showed Republicans only down 4-7 points in early November, just days before the party got drubbed by voters.  On the other hand, the RCP pre-election average showed Democrats with a double-digit lead.  Then there's the issue of actual on-the-ground electoral results, as opposed to national polling.  We've analyzed off-year and special election outcomes in the Trump era, and the story has been almost uniformly the same: Democrats, even when they've fallen short, have overwhelmingly improved on their 2016 margins significantly.  This trend has resulted in a host of red seats, including in some very Trump-friendly areas, flipping to blue.  Turnout disparities, motivation and intensity deficits, and presidential unpopularity all matter:

Midterm Tea Leaves: This Chart Shows Why Shrugging Off the GOP's PA-18 Loss Would be a Mistake https://t.co/ZPhzO6eigA

Polling may bounce around; those outcomes represent important, worrisome data.  So do developments like this.  Meanwhile, national Republicans are applying pressure to red state Senate Democrats, pointing out a (relatively small handful) of GOP pick-up opportunities on the House side, hyping their ground game, and hitting members who voted against the succeeding and popular tax law.  For instance, this story should get some decent play in North Dakota:

The state tax commissioner said his office has heard that tax reform has helped some local and national businesses by freeing up cash, but the effects may not be fully realized until the end of the year. Overall, though, Ryan Rauschenberger said the new Tax Cuts and Jobs Act will be beneficial to the state's economy. In a recent interview, Rauschenberger spoke about a number of advantages of the new tax law, particularly for individuals through doubling the standard deduction and enhancing the child tax credit from $1,000 to $2,000. "People have more money to spend, so that's good for not just North Dakota but the whole country," he said. The bill also features a new flat corporate tax rate of 21 percent, down from the previous top rate of 35 percent. This, in turn, has allowed some businesses to pass benefits onto their employees.

Sen. Heidi Heitkamp is in a re-election dogfight, particularly after she saluted Chuck Schumer and opposed the bill that is now benefitting her constituents -- and she wasn't truthful in her opposition, either.  I'll leave you with a follow-up to my Monday post about Claire McCaskill, via Missouri Rising: