Analysis: Republicans Should Be Worried About What Happened Last Night in Virginia 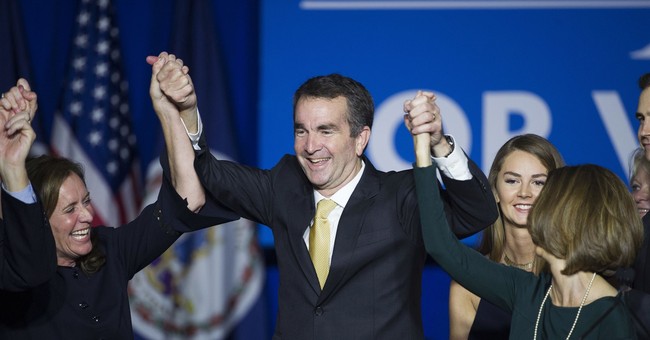 Democrats won resounding victories in Virginia and New Jersey last night -- a stark reversal of fate from eight years ago, when Republicans dominated 2009's off-year elections in those two states, foreshadowing an historic national midterm wave the following year.  There may be a faint silver lining or two to identify for the GOP today -- and Democrats would be foolish (click and read that link) to become overconfident based solely on these results -- but Republicans are kidding themselves if they downplay or dismiss what just happened.  A few points:

(1) Polling in the Virginia gubernatorial race tightened down the stretch, but overwhelming Democratic enthusiasm and turnout swamped Ed Gillespie's chances.  Democrat Ralph Northam led in the final polling average by just 3.3 percentage points, leading many to believe that Gillespie could overtake him on election day.  After all, Virginia Republicans' nominees for Governor and US Senate (including Gillespie himself) significantly outperformed statewide polling in 2013 and 2014 respectively, en route to unexpectedly tight losses.  Last night, the opposite happened: Northam won by 8.6 percentage points.  It wasn't close.  As Jim Geragthy notes, Gillespie held his base and won a slim majority of independents (50/47), but roaring Democratic turnout made this an unwinnable race:

Gillespie actually kept his party more unified than Trump did; exit polls indicated that 95 percent of self-identified Republicans voted for Gillespie, compared to 88 percent for Trump...This is the same guy who came within a percentage point of knocking off a Democratic incumbent in 2014. He’s likely to finish with about 120,000 or so more votes than he won in that midterm election year...No, the big difference of this year is that the Democratic base was fired up on a scale not seen since 2008. Yesterday’s Virginia electorate was 41 percent self-identified Democrat, 30 percent self-identified Republican, and 28 percent independent or something else. When the electorate looks like that, Republicans will get demolished every time.

Trump fans, including Trump himself, will insist that Gillespie just wasn't Trumpy enough, which is why he lost. Setting aside the fact that Trump also lost Virginia (gaining a lower share of the vote than Gillespie against a cartoonishly flawed opponent, no less), it's true that the GOP nominee is much more of a establishmentarian than the president.  But the thrust of many of his TV ads were pretty darned Trumpy: Blasting illegal immigration, demanding law and order on gangs, defending confederate monuments (cough) etc., even as he campaigned as a more economically-focused Republican on the stump. Gillespie was trying to straddle the fence of running up numbers in Trump country, while remaining competitive in aggressively anti-Trump Northern Virginia. The split personality schtick didn't work. Ultimately, though, Virginia exit polling found Trump's approval rating among last night's electorate 17 points underwater (40/57). That's lethally bad in a swing state.  Period.  Some laws of political gravity do apply to Donald Trump:

Democrats got pretty much exactly the results you’d expect when opposing a GOP president with a 38% approval rating. https://t.co/cPFl7zYIgR

By the way, yes, I still consider Virginia a battleground state, despite its recent blue tint. Prior to the Democratic current governor, Virginians elected Bob McDonnell by an 18-point margin, and only narrowly elected Terry McAuliffe to replace him even though McDonnell was embroiled in a massive ethics scandal. That said, with Northam's win, the Commonwealth's last two chief executives have been Democrats, as are both of its US Senators. Barack Obama won Virginia twice, and Clinton extended the winning streak at the presidential level. The GOP must confront the systemic challenge of appealing to downstate conservatives, with an eye toward the exploding population and influence of moderate-to-liberal Northern Virginia.  Clearly, that's been an insurmountable balancing act for an array of statewide candidates.

(2) Part of the damage control from Republicans today is that Virginia's governorship merely remained in Democratic hands, so the outcome wasn't unexpected or earth-shattering.  That's superficially true, but Northam's big margin belies that framing as pure happy talk.  Democrats' enthusiasm advantage isn't just a polling statistic anymore; it played out in living color on Tuesday, and it's Virginia's down ballot outcomes that should be most concerning to the GOP moving forward.  Remember this smart, pre-election historical analysis Matt highlighted yesterday?  It argued that election results in the Virginia's House of Delegates (the lower house) can serve as a useful preview of what's likely to happen in the following year's national general election:

Of the 66 Republicans, 17 are sitting in districts that voted for Hillary Clinton in 2016. Most of those 17 are in very competitive races that could go either way... Virginia's delegate races have often foreshadowed midterm results: In 2009, the GOP's six-seat gain took Democrats by surprise and presaged Republicans picking up the House in 2010. This year, if Democrats pick up fewer than five GOP-held seats, Republicans would probably take it as a relief. If Democrats pick up between five and 10 seats, it would confirm the House is in play. If Democrats surprise and gain 10 or more seats, it would be a sign they are probably on track to take back the House next year.

How'd that pan out?  The GOP came into the night in dominant position, controlling the lower chamber by roughly a two-to-one margin; Democrats needed to net 17 seats to win it back for the first time since 2001, a feat virtually nobody expected them to accomplish.  As of this writing, Democrats have won at least 15 seats (mostly featuring female challengers), with outstanding races too close to call. Bellwether areas of the state tilted blue, and the northern suburbs were an unmitigated disaster zone:

Here is a map of the Democratic pickups tonight. pic.twitter.com/7eUrpvFO1a

The best case scenario at this point is that Republicans hang onto control by the skin of their teeth.  Re-read the Wasserman piece above in light of the election results, and it's hard to deny that this is a big, flapping red flag for national Republicans.  Swing districts are not Trump districts:

For congressional R's who think they can "localize" races & not get caught in Trump down-draft, VA delegate races were unwelcome wake-up call.

(3) In New Jersey's governor race, the final polling average (+14.4 percent) predicted an easy win for Democrat and Wall Street alum Phil Murphy.  He won by 13.5 percent.  Murphy's enormous lead over the summer, boosted by his three-to-one spending edge, tightened down the stretch, as Republicans came home to Lt. Gov. Kim Guadagno -- who cut into Murphy's advantage by hammering him for supporting an effective "sanctuary state" policy.  But Chris Christie's historic unpopularity in a generally-liberal state made this pick-up a lock for Democrats.  Four years ago, Christie won a smashing re-election victory, which was unprecedented for a Republican, by modern New Jersey political standards.  In January, he will leave office plagued by a scandal-driven, dismal approval rating, with Democrats holding a firm grip on power in the state (even though their down-ballot gains last night were marginal).  Their announced first move?  New tax increases, of course, in a state that already has one of the heaviest tax burdens in America.  Soak the rich, lose the rich -- but win some elections along the way.

(4) In Utah, a special election was held to replace recently-retired Congressman Jason Chaffetz, and Republicans held the seat with zero drama.  Turnout was significantly down across the board, as one might expect -- nevertheless, as the New York Times put it, "the Democratic candidate, Kathie Allen, raised a sizable sum of money online by tapping into liberal loathing of Mr. Chaffetz."  It did her little good.  In 2016, the Democratic nominee in this district won 26.5 percent of the vote. Yesterday, the Democratic nominee in this district won 27.1 percent of the vote.  If you're looking for a halfway decent straw at which Republicans can grasp today, this is it: Of the six special Congressional elections that have been held since Trump's election, five of them were fought over Republican-held seats.  And Republicans have now retained all five, including a few contested and expensive races.  For Democrats to replicate the scope of GOP landslides from 2010 and 2014, they'll need to pull off some surprises in red territory (think Chris Christie in 2009 and Scott Brown in 2010), as opposed to "neutral or even Democratic-leaning terrain." That hasn't happened yet, although some of those Virginia House of Delegate upsets come pretty close to fitting the bill (albeit on a very small scale, in very low-hype races).

(5) This is some...less than inspiring White House spin on Tuesday's results, which reads like pre-spin on the next round of losses:

Yes, midterms usually bring gains for the out-party, but keep in mind that the president's approval is stuck in the tank, in spite ofstrong economic indicators -- another reality that should keep a bunch of incumbents up at night.  I'll leave you with three urgent messages that Republicans ought to heed over the next year.  One pertains to electoral politics, and the others to governing:

You have one year. Make it count.

One of the biggest lessons for Congressional Republicans is to do their jobs. They'll be known either for the laws they pass or the tweets the President makes.