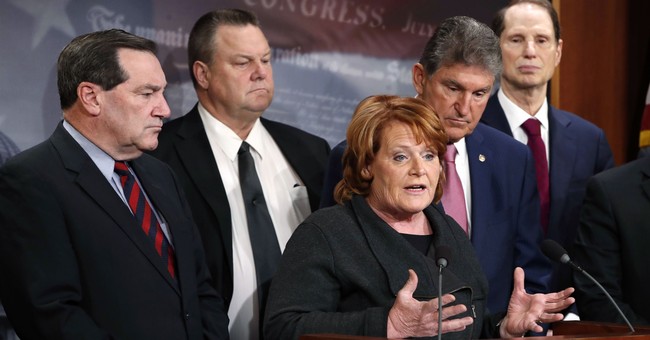 We've noted on several occasions how favorable the 2018 Senate map is for Republicans, even if the national electoral environment ends up with a deep blue tint (the GOP's fortunes have ticked up, thanks to tax reform and good economic news, which the president's foolish trade war gambit threatens).  Losing Alabama was an entirely avoidable setback, giving Democrats a better shot at taking over the upper chamber in November.  But that task would still require them netting two seats, which will be exceptionally difficult if Republicans can knock off a Democratic incumbent or two -- or more.  On paper, of the juiciest targets was North Dakota's Heidi Heitkamp.  Donald Trump carried her state by a 63-27 margin in 2016, and Heitkamp has done Chuck Schumer's bidding on some big votes, from Obamacare to tax reform (about which she lied), to judicial nominations.  Nevertheless, senior Republicans I spoke to in recent months were nervous about the lack of a formidable challenger to take her down.  That all changed a few weeks ago, however:

North Dakota Republican Rep. Kevin Cramer announced Friday plans to run for Senate against Democratic incumbent Heidi Heitkamp. The decision is sure to come as a relief to Washington Republicans who had been pressuring him to reconsider his decision last month to stay put in the House. With Democrats fighting hard to seize control of the House this fall, Republicans are determined to hold onto their narrow majority in the Senate, now at 51-49. Heitkamp, a Democrat in a deep-red state that went overwhelmingly for President Trump in 2016, is thought to be one of the most-vulnerable senators this cycle. But until now, Republicans had failed to recruit Cramer to run against her. Cramer, a staunch Trump ally, acknowledged earlier this week that he was being pushed to reconsider by forces both in Washington and in North Dakota. Trump reportedly was among those applying pressure.

I'd heard consistent reports from GOP sources that if Cramer decided to get into the race, he'd enter the contest in a strong polling position -- which would not be good news for a vulnerable incumbent like Heitkamp.  And, voila:

Another survey showed the race within the margin of error, with Heitkamp's re-elect number sitting at...43 percent.  Other extremely beatable Democrats this cycle include Missouri's Claire McCaskill, Indiana's Joe Donnelly and West Virginia's Joe Manchin, with a slew of others just one tier down.  Karl Rove adds more context to the North Dakota race:

The GOP’s best shots to pick up seats are in five states Mr. Trump won by double digits. One is North Dakota, which the president carried with 63% of the vote. The same night Mr. Trump earned 216,794 votes and a 36-point victory, Rep. Cramer received 233,980 votes for his 45-point margin. In 2012, when Sen. Heitkamp and Rep. Cramer both won for the first time, she got 161,337 votes and a 0.9-point margin while he received 173,585 votes and a 13.2-point margin. Ms. Heitkamp’s voting record offers Republicans plenty of ammunition. She has voted against Mr. Cramer and the state’s popular senior senator, Republican John Hoeven, on issues like tax cuts, health care and energy—energy being of particular concern because North Dakota is America’s second-biggest producer of crude oil. Mr. Cramer is also a superb grass-roots campaigner, which matters in a state where politics is personal and voters are clustered on the center right.

Click through for Rove's take on the Arizona Senate battle, in which Republicans seek to hang on to a Jeff Flake's red seat.