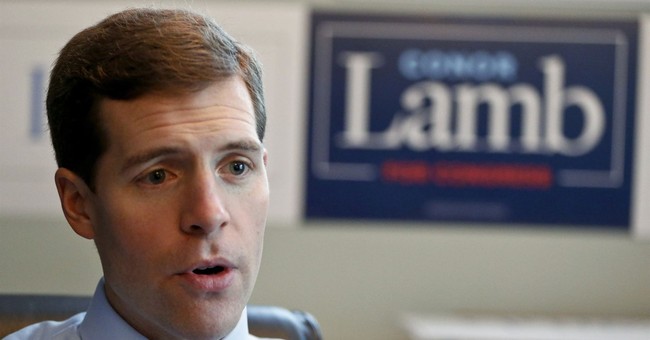 We told you that this race was looking shaky for Republicans last week, and we weren't kidding.  Pending a possible recount, Democrat Conor Lamb has likely won the special election in Pennsylvania's 18th Congressional District by an extremely thin margin -- but no matter what the final tally looks like, even if the apparent victor somehow flips, the GOP cannot be feeling good about how this one shook out.  Here are my top three lessons coming out of Tuesday night:

(1) The GOP should be worried about November.  There are multiple factors at play here: History cuts against the president's party in midterm elections in general, which cannot be ignored  The president's approval rating is in the low 40's, which is not good, especially considering how well the economy is doing.  And one side's base is more fired up than the other.  Last year, Republicans had won five straight contested special elections in which Democrats were seeking to flip a seat.  That streak ended in the Alabama Senate race, which could have been written off as a perfect storm for Democrats.  This one cannot be written off.  This has been a very Republican district:

It's true that ugly sex scandals don't typically benefit the incumbent party, but under normal circumstances, this should have been a relatively easy hold for Republicans.  The fact that it was a nail biter in the first place was a red flag for the GOP.  Democrats need to net 24 seats to win back the House this fall.  There are 23 lower chamber seats represented by Republicans in districts carried by Hillary Clinton in 2016.  Those are the 'low hanging fruit' pickup opportunities for Democrats.  On paper, PA-18 was a pretty darned safe R seat.  Until it wasn't.  Last night is a prime example of why the opposition party is feeling pretty bullish about its chances to put a ton of seats in play -- especially if this type of intensity gap doesn't close.  The president couldn't pull the Republican candidate over the top in the heart of rust belt "Trump country."  That's a glaring concern, as is the fact that Republicans and affiliated groups pulled out all the stops to save this seat.  What, if anything, can re-engage the GOP base?  It's tough to say, but this might be one of the only valid possibilities.  You simply cannot pretend these trends don't exist:

In the seven special elections held in 2017, the average shift from 2016 results was D+16. Tonight, it's D+20. 2018 will be very, very ugly unless something cataclysmic happens for GOP.

This is shaping up more and more like 2010, but in reverse.  And that's in spite of lots of good economic news Republicans can crow about. In that red wave year, voters generally liked the president personally, but strongly opposed many of his policies. This year, economic optimism is sky high and the tax law is on the rise, yet the president's personal unpopularity is shaping up as a stifling factor.

(2) Candidates matter.  A few weeks ago, some well-connected Republicans told me that Rick Saccone was proving to be a nice enough guy, but a very underwhelming candidate.  He was not a strong campaigner, did not stir enthusiasm among grassroots voters in southwest Pennsylvania, and was a notably lousy fundraiser.  Outside groups and the national party poured in giant amounts of resources to compensate for that shortcoming, but Democrat Conor Lamb's robust fundraising operation and impressive knack for retail politics were a potent combination.  Even though Team Red heavily outspent Team Blue in the race, Lamb got a deep discount under election laws, compared to national organizations, allowing him to achieve a more level playing field than the raw dollars suggest.  He also campaigned as a more traditional blue dog, professing his opposition to abortion (though his actual legal stance is quite extreme, especially in this pro-life area), giving a thumbs-down to a $15 federal minimum wage, opposing single payer healthcare, and strongly backing the Second Amendment -- including coming out against any form of an assault weapons ban:

Lamb, the Democrat, opposed an assault weapons ban after Parkland. “The emotions that a lot of us are feeling right now are very raw because we know that there’s not one thing we can do with the stroke of a pen or one thing you can ban.” https://t.co/9eKhmQs1Lp

The Democrats ran exactly the sort of candidate they needed to in this district to have a shot at winning.  Republicans ended up with a amiable clunker.  Inject those dynamics into the current political environment, and that's how an upset happens.

(3) More Democrats will try to neutralize the Pelosi Factor.  The Lamb campaign made a decision to outwardly oppose Nancy Pelosi as Democratic leader, and it helped them. A major element of the GOP strategy against Lamb was to tie him to the polarizing and unpopular San Francisco liberal, so he blunted some of that attack by washing his hands of her.  More Democrats in purple-to-red districts will certainly do the same.  The inability to take a clean hit at Pelosi hurt Republicans in PA-18, as did the fact that support for the tax reform law had not rebounded in that district the way it has nationally, including in a number of other important swing districts.  In other words, the one-two punch of hammering Pelosi and touting tax cuts -- which very well may work elsewhere -- was somewhat uniquely ineffective in this contest.  Republicans were left talking about some social issues, on which Lamb had positioned himself as a moderate.