Fact Check: No, Millions of People Would Not 'Lose Healthcare' Under Senate GOP's Tax Reform Bill 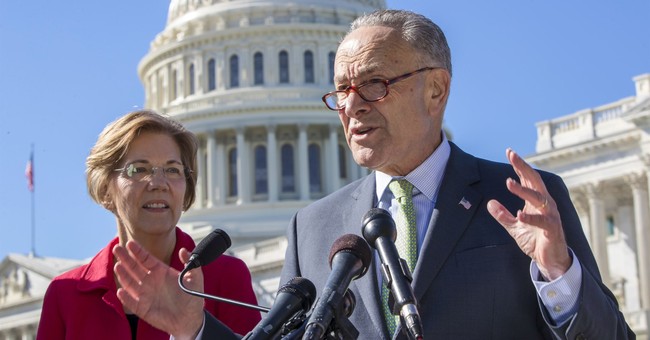 Heeding President Trump's request that it adopt a tax reform bill before Thanksgiving, the Republican-led House of Representatives passed a reform package last week.  In spite of a torrent of liberal attacks, independent analyses have confirmed that the plan would boost economic growth, create nearly one million new full-time jobs, and reduce the tax burden on the vast majority of Americans; on average, taxpayers in every income group would receive a tax cut.  There will be a small percentage of Americans -- many of them wealthier people who itemize deductions and exploit loopholes -- who would be worse off under the proposal.  Republicans would be foolish to pretend that every single household and business would emerge as 'winners' if reform is implemented; that would echo one of the biggest lies Democrats peddled about Obamacare.  But the data has found that an overwhelming majority of Americans, including (or even especially) the middle and working class, would benefit from the House-approved bill.

The Senate, meanwhile, is in the process of moving its own bill.  The Finance Committee advanced legislation last week on a party line vote (it's worth noting that zero House Democrats voted in favor of middle class tax cuts), and Mitch McConnell's goal is to shepherd a successful floor vote through in the coming weeks.  As we learned during the 'repeal and replace' flop, wrangling 50-plus-one Senate votes on a major bill can be quite challenging, and one conservative member is already signaling he's a "no" on the plan currently being discussed.  If Senate Republicans are able to get their acts together and pass something, a conference committee would hammer out the differences (some of which are substantial) between each chamber's bill, crafting a compromise law that would bounce back to each house for final passage.  There are a number of objections being raised to the Senate bill, including the populist talking point that it would make corporate tax cuts (which Democrats once supported) permanent, whereas the cuts for individuals and families would expire midway through the next decade.  The reason for this discrepancy has everything to do with budget rules, under which the legislation can only add a certain amount of money ($1.5 trillion over ten years) to on-paper deficits.

Past experience strongly suggests that Congress does not have the will to allow tax increases on middle class families to occur, and Republicans would push hard for a renewal of the lower rates. The only way those tax increases would occur is if a hypothetical Democratic Congress refused to prevent it.  Republicans should pressure their opponents at every opportunity: If you're complaining about the expiration provision, will you commit to ensuring that the lower rates never expire?  It's also interesting to listen to Democrats falsely suggest that the GOP bill would not cut middle class taxes, then also turn around and warn that if the GOP bill's new rates expire, middle class Americans will face a tax increase.  The latter attack proves that the former attack is bogus -- and the latter criticism vanishes if Democrats would simply vow to extend or make permanent the lower rates when a potential deadline arrives.  This is exactly what they did with nearly every single bit of the Bush tax cuts, as part of the Obama-era "fiscal cliff" deal.

Then there's the tempest over the Senate bill's inclusion of an Obamacare individual mandate repeal, which would save the federal government hundreds of billions of dollars. McConnell and company are applying those on-paper savings to the tax reform budget "score," to make the numbers work.  There are upsides and downsides to this move, but the Left is once again dusting off its false talking point that eliminating the individual mandate would cause millions to "lose" coverage.  This rhetorical sleight of hand was deployed constantly during this year's healthcare debate, as Democrats endlessly exploited the Congressional Budget Office's vast over-estimation of the power of the mandate (which they appear to finally be admitting and reconsidering) in order to inflate the "lost coverage" numbers.  Regardless of where the revised number lands, dumping the mandate liberates millions of Americans to not purchase healthcare plans that they do not want or cannot afford, without getting slapped with government fines.  People making that choice for themselves and their families is absolutely not equivalent to the government taking away coverage.  Healthcare policy expert Avik Roy puts a finer point on this important truth, which underpins liberals' mendacious claim:

[Another] category of Democratic complaints revolves around the Congressional Budget Office’s estimate that 13 million fewer people would have health insurance in 2026 if Republicans repealed Obamacare’s individual mandate. “We’re kicking 13 million people off health insurance to give tax cuts to the wealthy,” exclaimed Senate Minority Leader Chuck Schumer (D., N.Y.) on Wednesday. There are two problems with Schumer’s assertion. As Glenn Kessler, fact-checker at the Washington Post, notes, nobody is being “kicked off” their insurance. People are no longer being fined for not purchasing it. (Kessler gives Schumer two Pinocchios.) The second problem is that the CBO’s projections of the mandate’s magical powers are inaccurate, by their own admission.

The whole analysis is worth reading, including Roy's dismantling of the inaccurate claim that repealing the individual mandate would "raise taxes" on families making less than $30,000.  It doesn't.  Quote: "This isn’t a tax hike at all: it’s the voluntary foregoing of a tax credit."  Please also recall that there was once a time when Barack Obama himself believed it was unjust to force Americans to purchase unaffordable healthcare plans -- an attack he parlayed to great electoral effect, before famously embracing the idea as the tent pole of his failing law:

#TBT to when even President @BarackObama admitted it’s unfair to punish people who can’t afford or don’t want insurance. pic.twitter.com/1ZmCMNus2R

I'm a longtime, fierce critic of Obamacare and its central mandate.  That said, I'm concerned about the accelerated "death spiral" effect that would likely accompany an individual mandate repeal, absent an alternative method of preventing an adverse selection crisis (Roy's piece above posits that this effect will be pretty limited).  I also wonder if injecting healthcare politics into the tax debate could jeopardize tax reform's chances of actually passing, given what we know about some Senators' skittishness over touching a law they pretended to oppose.  But if Republicans can manage to muster the votes to simultaneously deal a huge blow to Obamacare and pass a sweeping reform of our tax code, that would be quite a political feat.  I'll leave you with another fact check on a nonsense claim being spread about the GOP tax reform bill.  You may have heard that sneaky Republicans secretly added a sweetheart private jet tax break into the Senate legislation, to benefit their rich fat cat buddies.  That's a lie:

Did you hear the one about the “private jet deduction” in Senate Republicans’ tax bill? There’s less to it than that—and it’s backed by one of the most liberal Democrats in the Senate. The provision attempts to ensure an excise tax for commercial airline flights isn’t imposed on private flights operated through management companies. Under the law, private jet owners pay a higher fuel tax than commercial airlines do but no ticket tax, said Troy Rolf, an aviation tax attorney at GKG Law. After years of court cases and Internal Revenue Service audits, some of the definitions had gotten vague or confusing...The main Senate bill on this issue was sponsored by Sen. Sherrod Brown (D., Ohio)...“This provision in no way cuts taxes for private jet owners,” said Jennifer Donohue, a spokeswoman for Mr. Brown. “It simply clarifies what the law already says—that service companies made up of mechanics and service workers don’t pay ticket taxes, because they don’t sell tickets.” Mr. Brown’s home-state colleague, Republican Rob Portman, wrote the amendment that got the provision into the Senate bill. “This bipartisan proposal clarifies the intent of the law and stops a specific IRS abuse when the agency chose to ignore the law,” said Kevin Smith, a spokesman for Mr. Portman.

So it's an item championed by a liberal Democrat that merely clarifies existing law, and would not provide any "tax break" to private jet owners. But let's not let the facts get in the way of cheap political point-scoring. Indeed, the populist exploitability of the "private jets!" claim has proven irresistable for some of the Senate's biggest Democratic hacks -- especially hacks who want to run for president:

Retweet if you would *not* benefit from a private jet tax break. https://t.co/jxAWezkbq8