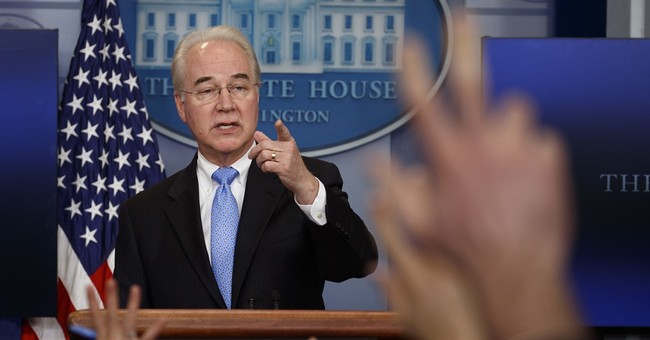 One of the biggest reasons Obamacare is failing so badly (and remains remarkably unpopular, despite 'status quo bias' kicking in and improving its overall poll standing) is that the "risk pools" on the exchanges have consistently fallen far short of demographic composition benchmarks that would make the markets financially sustainable. Basically, too few younger and healthier Americans are signing up for coverage, which they've found to be too expensive -- choosing to forego unaffordable coverage by just paying the mandate tax penalty. This widespread trend has resulted in the risk pools being disproportionately stacked with older and sicker consumers, who are obviously more expensive to cover. As carriers adjusted their rates to reflect their increased costs by raising premiums, more healthy people fled the marketplaces. Eventually, this spiral convinced a series of major insurance companies to withdraw from many or all Obamacare exchanges across the country, a very worrisome sign for the future of America's individual and small group markets under the existing regime.  So that's a big part of the problem, in a nutshell. Obamacare's individual mandate tax was supposed to coerce people into participating in the law anyway, but rates and out-of-pocket costs proved too pricey.

If a Republican-passed law were to succeed, this trend would need to be arrested and at least partially reversed. Would it? That is a serious point of contention and debate.  And it's really important. A key point here is that due to widespread public support for the fairness principle, "guaranteed issue" regulations that protect people with pre-existing conditions remain intact within the GOP bill. That means that insurers must cover people with existing illnesses and conditions, and charge them similar rates to everyone else (another regulation known as "community rating"). Any way you slice it, that's expensive to do. Obamacare tried to deal with the resulting dynamic by legally requiring everyone to buy health insurance to ensure broad-based, healthy markets for insurers. Obamacare's defenders proceeded to congratulate themselves when millions of people followed the law (what an "accomplishment"!), but those celebrations became more muted as it became clear that far fewer people than expected were signing up, due to of lack of affordability.

The Trump/Ryan proposal deals with this challenge in four ways: (1) Rather than maintaining a universal mandate to purchase coverage, the bill would allow insurers to charge 30 percent more to anyone whose coverage lapses for more than two consecutive months, then seeks to re-enter the market. This is an incentive to remain continuously insured (people who remain continuously insured are protected from any discriminatory rate hikes, or being booted from coverage), and it erects an important disincentive against simply waiting to get sick or hurt before signing up (because you'd have to pay substantially more than you would have for the exact same coverage plan). That surcharge would go to the insurers -- whose bottom lines are taking a beating under Obamacare's failures -- not to the federal government.

(2) The Republican plan adjusts Obamacare's "age band" (under which young people are being exploited to subsidize older people) in a significant way.  The current 3-to-1 ratio governing how much more older consumers can legally be charged than younger consumers has been extended to 5-to-1.  This will result in cheaper offerings for younger consumers.  On that front, "phase two" of the GOP plan is regulatory and executive guidance from the HHS Secretary  (part one is the reconciliation bill, part three is regular-order legislation with elements that cannot be included in a reconciliation package under the rules). Obamacare enshrined enormous discretionary and policy-influencing powers in that position, of which Kathleen Sebelius took frequent advantage.  Now Tom Price occupies that seat, so he'll use his power to change regulations in such a way as to drive down rates.  Obamacare is loaded up with ten "essential benefits" categories that all government-approved plans must cover.  By easing some details within those mandate brackets  -- some of which are very costly and impractical, especially for young people -- the hope is to re-legalize cheaper and less comprehensive coverage options that would be more attractive to relatively young and healthy people.  The more who enter the marketplace, the more stable and sustainable those risk pools become.

(3) Additional proposed changes such as allowing the purchase of plans across state lines, and the implementation of medical malpractice reforms, are widely viewed as solutions to help reduce costs and increase options.  These provisions do not deal with budget issues, so they cannot be included in a reconciliation bill.  They would therefore be subject to a filibuster in the Senate.  Perhaps Mitch McConnell has some tricks up his sleeve to win some Democratic support for these (relatively uncontroversial) ideas, maybe by attaching them to other legislation.  President Trump has reportedly told conservative allies that this part of the reform roadmap ("phase three") could be introduced very soon.  Stay tuned.

(4) One under-examined provision in GOPCare is a $100 Billion fund (spent over a decade) that gives states a big pot of money with which to innovate around the concept of "high-risk pools."  This entails devoting a large chunk of cash to providing care to people who are the most expensive to cover (individuals with very difficult and costly pre-existing conditions).  By providing federal funds specifically earmarked for states to help that limited band of consumers, the idea is to pluck those people out of the "normal" risk pools, and place them into a separate high-risk pool.  This would make the general marketplaces more sustainable because expensive outlier cases would be excluded from the actuarial math.  These vulnerable citizens would be taken care of, but not via the individual and small group market -- which would help carrier's balance sheets.

Bottom Line: Overall, the idea is that by bringing down the coverage price tag for younger and healthier consumers through this mix of policies, more people from that cohort will enter the marketplace, and the continuous coverage/surcharge structure will incentivize them to remain in the market.  This a plausible plan, at least on paper.  The Obamacare mandate isn't working, as costs keep rising and more carriers cut bait.  That much is clear.  But will this blend of solutions fix the problem?  Possibly, but there's no guarantee of success -- and some experts are skeptical that even lowered premiums (coupled with federal assistance via refundable tax credits that in some cases will be less generous than the current subsidies, and the 30 percent surcharge) will be enough of a magnet to pull those "young invincibles" into the risk pools.  That is a vital component of a successful reform.  If Democrats manage to block "phase three" policies that would help reduce rates, that would deprive Republicans of a chance to implement their full array of ideas to drive down costs, which would impact results.  I'd like to see more data-based reassurance that the death spiral dilemma will at least be significantly mitigated by the GOP's proposed solutions, vis-a-vis the failing mandate.