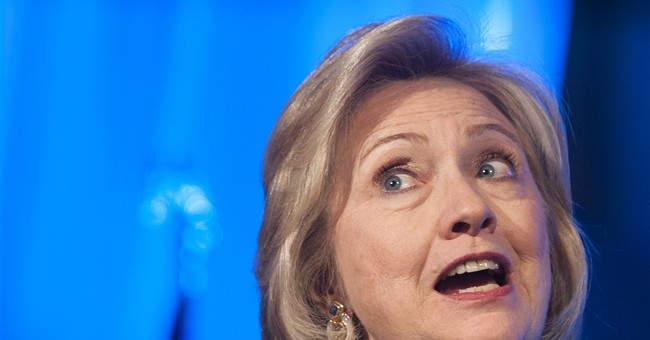 Bill Clinton made waves last week with his pronouncement over Obamacare's most infamous (for now) dishonored promise. Conspicuously absent from the resulting hullabaloo was any comment from Bill's wife, Hillary, whose fingerprints are all over the imploding health law:


Aides to Hillary Clinton did not respond to a request for comment about whether Bill Clinton’s views reflect her own. They come at a time when it seems increasingly likely that Hillary Clinton, who’s said she’s considering running for president in 2016, will have to open up some daylight with Obama on specific issues.


The Wall Street Journal published an article yesterday exploring Hillary Clinton's role in the ill-fated 'Clinton Care' push of the early 1990s. Might her dogged pursuit of an even more invasive government intrusion into healthcare come back to haunt her in a 2016 presidential bid -- especially if public attitudes on the issue remain sour? It's certainly conceivable, but I suspect her more recent healthcare positions and rhetoric are more likely to play a salient role in a future campaign. Given how closely President Obama's brand is associated with Obamacare, it's easy to forget that he was once a staunch opponent of what would eventually become his signature legislative legacy project. During the bruising Democratic primaries of 2007 and 2008, Obama clobbered rival Hillary Clinton over her support for an individual mandate -- which was the tent pole of her healthcare proposal. His blistering critiques sometimes crossed into outright derision:

"I believe the problem is not that folks are trying to avoid getting healthcare. The problem is they can't afford it."


Lo and behold, by 2009, Obama found himself embracing the very mandate he'd spent the previous year fashioning into the key domestic policy difference between himself and his former opponent. In an instant, Hillarycare became Obamacare. Hillary Clinton may hope to quietly back away from her brainchild as she devises some talking points to sidestep its failures. If she eventually claims that she would have sold her plan in a more forthright and honest way, Republicans can note that she helped pioneer a certain blanket assurance for which Obama is now paying a major political price:


Surprise. At the time, candidate Clinton was trying to blunt GOP attacks that succeeded in bringing down her previous big government healthcare project. Hillarycare 1.0 would have been more disruptive than Hillarycare 2.0 to people's existing coverage arrangements, so she tweaked things to give her the space to tell wary consumers that their plans and doctors would not be affected by her new reform proposal. This promise was always impossible to keep, as we've all learned the hard way. In the end, Hillary's best defense may be that had she been president, she would have implemented the system more competently than Obama has. (A low bar). The beauty of this argument is that it's a hypothetical that's impossible to disprove. But we might be able to extrapolate some things based on past performance? How, for instance, did Clinton's hands-off executive leadership serve the Benghazi four? And don't forget this disgusting performance, which she knew was a sham at the time. Would she follow-through on essential tasks better than Obama? She didn't here. If any of these questions become a drag on her potential White House run, perhaps she'll employ her go-to buck-passing rhetorical question: "What difference, at this point, does it make?" I discussed the Hillarycare/Obamacare nexus on Fox News yesterday afternoon: