Based on New Revelations About Alleged Clinton Probe Pre-Judgment, Comey Should Testify Again 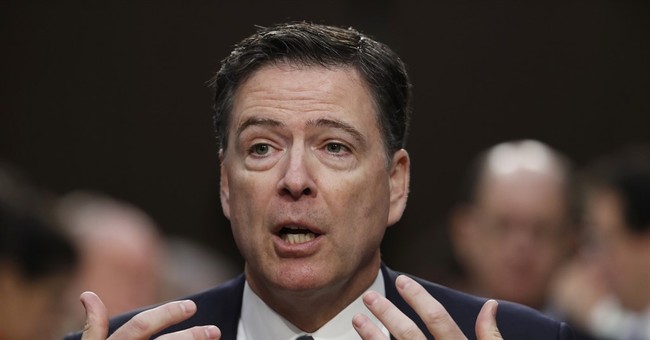 Most of the media downplayed or ignored last week's revelation that fired FBI Director James Comey began drafting a statement exonerating former Secretary of State Hillary Clinton of any crimes connected to her email scandal -- about which she lied repeatedly -- months before the Bureau's investigative work had been concluded.  A letter from two Republican Senators charged that Comey began his work on preliminary exculpatory memos before agents had finished questioning key witnesses such as Bryan Pagliano, Cheryl Mills (who was mystifyingly offered immunity), and prior to interviewing Mrs. Clinton herself at all.  Chuck Grassley and Lindsey Graham that this sequence of events suggests an inappropriate "conclusion first, fact-gathering second" approach to the probe.  Comey ultimately declared that although Clinton's conduct was extremely negligent and likely exposed reams of classified information to hostile regimes' hackers, her lack of criminal intent meant that no crime had been committed.

This conclusion was not based on the plain text of the relevant law, nor was its "intent" analysis convincing, given Clinton's actions.  Nevertheless, that was the standard by which the Democratic nominee for president was let off the hook.   Former federal prosecutor Andy McCarthy, who worked alongside Comey during his career, writes at National Review that it's no coincidence that the former FBI chief's quasi-legal reasoning laid out in July 2016 closely echoed the views President Obama aired on television the previous spring -- around the same time that Comey began drafting his premature "no crime" statement.  I discussed this piece with McCarthy on Fox News Radio last evening:

Obama’s April statements are the significant ones. They told us how this was going to go. The rest is just details. In his April 10 comments, Obama made the obvious explicit: He did not want the certain Democratic nominee, the candidate he was backing to succeed him, to be indicted. Conveniently, his remarks (inevitably echoed by Comey) did not mention that an intent to endanger national security was not an element of the criminal offenses Clinton was suspected of committing – in classic Obama fashion, he was urging her innocence of a strawman crime while dodging any discussion of the crimes she had actually committed...What else was going on in May 2016, while Comey was drafting his findings (even though several of the things he would purportedly “base” them on hadn’t actually happened yet)? ...The Obama Justice Department was leaking to the Washington Post that Clinton probably would not be charged – and that her top aide, Cheryl Mills, was considered a cooperating witness rather than a coconspirator.

...The Obama Justice Department was simultaneously barring the FBI from asking Mills questions that went to the heart of the e-mails investigation – questions about the process by which Clinton and her underlings decided which of her 60,000 e-mails to surrender to the State Department, and which would be withheld (it ended up being about 33,000) as purportedly “private” (a goodly percentage were not). This was the start of a series of Justice Department shenanigans we would come to learn about: Cutting off key areas of inquiry; cutting inexplicable immunity deals; declining to use the grand jury to compel evidence; agreeing to limit searches of computers (in order to miss key time-frames when obstruction occurred); agreeing to destroy physical evidence (laptop computers); failing to charge and squeeze witnesses who made patently false statements; allowing subjects of the investigation to act as lawyers for other subjects of the investigation (in order to promote the charade that some evidence was off-limits due to the attorney-client privilege); and so on. There is a way – a notoriously aggressive way – that the Justice Department and FBI go about their business when they are trying to make a case. Here, they were trying to unmake a case.

This new information is likely to infuriate Republicans who've always believed the investigation was "rigged" in Democrats' favor -- especially in light of the now-established fact that after the election, Comey refused to state publicly what he'd told President Trump in private on multiple occasions: That Trump was not a subject of the Russia probe.  This feeds the narrative, fair or unfair, that the political actors whose fates were tied to these concurrent investigations were not treated consistently, and that politics poisoned the proceedings.  Democrats, by the way, would argue that Comey's October surprise "re-opening" the investigation based on new evidence just days before the election proves that he was neither doing Obama's bidding nor trying to protect Clinton.  Republicans would counter that Comey presided over a stacked investigation (see McCarthy's second paragraph above), ignored the letter of the law, and initially went along with Loretta Lynch's improper, meddlesome request that the email scandal investigation be referred to as a "matter."

I'm not sure it's fair to call the newly-produced transcripts pertaining to the late-April memo drafting a solid basis to attack Comey's professional integrity.  But it certainly raises fresh questions about how the FBI brass conducted the Clinton investigation.  Comey may have reasonable and compelling explanations for why he started writing up his own "not guilty" verdict before highly relevant information had been gathered.  He should be invited to share those justifications under oath:

Time for him to testify again https://t.co/jzr0cdIUiU

I can hear the objections already: Why re-litigate this old issue?  Hillary lost, Trump is president now, and looking backward on this feels like petty and obsessive whataboutism.  This is a fair critique, up to a point.  But one of the major controversies that has roiled Washington in recent months is the extent to which figures in Trumpworld, including the president himself, applied inappropriate or even illegal pressure on the Russia investigation and its subsets (including the Michael Flynn affair).  If President Obama and his Justice Department compromised the independence of the Clinton probe in the middle of a contested election cycle, and the FBI knuckled under, Americans have a right to know about it.  If the Bureau has become too politicized to carry out its core functions  when partisan implications are at play, that's a serious problem.  President Trump has selected an excellent successor to James Comey, whose justifiable dismissal was handled terribly.  That's a positive sign.  Revisiting this whole episode and putting Comey back on the witness stand should not occur as a means of dancing on Hillary Clinton's political grave.  It should be used to dig into a law enforcement decision-making process about which new and serious questions have been raised.  Finally, I'm still trying to figure out what this is about:

.@FBI shuts down request for files on Hillary Clinton by citing lack of public interest https://t.co/cqdBolcNVu