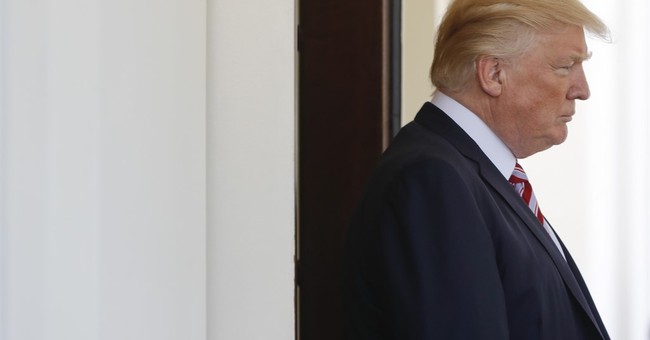 Another evening, another potential bombshell. Just as Washington starting to wrap its arms around the possible fallout from the president's alleged disclosure of highly classified intelligence from a foreign partner (reportedly Israel), the New York Times drops this story:

President Trump asked the F.B.I. director, James B. Comey, to shut down the federal investigation into Mr. Trump’s former national security adviser, Michael T. Flynn, in an Oval Office meeting in February, according to a memo Mr. Comey wrote shortly after the meeting. “I hope you can let this go,” the president told Mr. Comey, according to the memo. The existence of Mr. Trump’s request is the clearest evidence that the president has tried to directly influence the Justice Department and F.B.I. investigation into links between Mr. Trump’s associates and Russia. Mr. Comey wrote the memo detailing his conversation with the president immediately after the meeting, which took place the day after Mr. Flynn resigned, according to two people who read the memo. The memo was part of a paper trail Mr. Comey created documenting what he perceived as the president’s improper efforts to influence a continuing investigation...The New York Times has not viewed a copy of the memo, which is unclassified, but one of Mr. Comey’s associates read parts of the memo to a Times reporter...Mr. Comey created similar memos — including some that are classified — about every phone call and meeting he had with the president, the two people said. It is unclear whether Mr. Comey told the Justice Department about the conversation or his memos.

The White House issued a denial:

While the Times called the memo "a paper trail Mr. Comey created documenting what he perceived as the president’s improper efforts to influence an ongoing investigation," the White House insisted it did no such thing. "The president has the utmost respect for our law enforcement agencies, and all investigations," the White House said. "This is not a truthful or accurate portrayal of the conversation between the president and Mr. Comey.”

Thoughts: (1) Let's clear up questions over the existence and authenticity of this memo, which the Times and other news organizations concede they haven't actually seen. First, Congress should subpoena both the memo itself, and any others like it. The Times story says that Comey wrote detailed accounts of all of his discussions with the president. If that's true, let's have them. Second, Comey himself must testify about the memos and the content of the alleged conversation about Flynn. Did he believe at the time that Trump was obstructing justice? That would be a crime, and could be grounds for impeachment. He must be asked. And it sounds like he will be:

Sen. Marco Rubio: "it is inescapable now" that Comey must be called before Congress to testify about this newly revealed memo.

Asked if he's already invited Comey to testify, Graham turned to TV cameras and said, "I just did."

CHAFFETZ: "On the surface that seems like an extraordinary use of influence to try to shutdown an investigation being done by the FBI"


(2) If "hey, please obstruct justice" was the impression Comey got from the talk, why did he not resign on the spot (just as he might have when Trump supposedly asked for his "loyalty")? Allahpundit speculates: "I’d guess it’s because he thought his successor might be more compliant with Trump’s wishes than he was. He wanted to protect the investigation and the best way to do that was to remain in place and keep what Trump allegedly said to him to himself. For awhile." I'm not sure if that's a tenable excuse, but it's plausible. Boy, those mythical (?) tapes Trump mentioned on Twitter sure would be interesting to hear now, wouldn't they?

(3) If the memo is real and Trump applied pressure on the FBI Director to "get over" an investigation of his friend and political ally, it is indescribably bonkers that Trump not only fired Comey, but did so in an astonishingly unceremonious manner.  Assuming for the sake of argument that the Times wasn't sold a bill of goods, the only explanation that I can fathom at this point is that Trump genuinely didn't realize that such a request was highly inappropriate, and quite likely illegal. If he understood that Comey could plausibly finger him for obstruction of justice, why on God's green earth would he send the guy packing in such a humiliating way? Occam's Razor (I'm not endorsing the first tweet in this pair):

It suggests a man who literally cannot think through the howlingly obvious consequences of his actions.


Asking the Vice President and Attorney General to leave the room could be evidence of consciousness of guilt. Or it could be evidence that Trump wanted to try what he conceived of in his mind as a relatively harmless personal charm offensive in a one-on-one, heart-to-heart setting.  The former would be corruption.  The latter would raise questions of fitness.

(4) Just last week, the acting FBI Director testified under oath that the Russia probe was moving forward with adequate resources, and without political pressure.  Was that a lie?  Not necessarily.  The Times story says that Comey shared the memo with a handful of top officials at the Bureau, but not with the agents working the case.  McCabe, presumably, was in the loop (this is another question Comey should be asked by Congress).  But the same story draws a distinction between the broader investigation into Russia's election meddling and a "separate" Flynn probe.  The two could definitely be seen as related, but perhaps law enforcement considered them on distinct tracks, hence McCabe's answer.

(5) If the Comey memo is produced and authenticated, is that sufficient proof that Trump really said what the memo allegedly describes? The Times report notes that, "an F.B.I. agent’s contemporaneous notes are widely held up in court as credible evidence of conversations." And potentially unhappily for Trump, Comey is known for his meticulous note-taking:


(6) Why should we believe the "failing New York Times," which is hopelessly biased against Trump and Republicans? The Times' track record of bias obviously merits skepticism. However, this particular reporting was done by a tough young journalist who also broke the Clinton email server story -- pulling the first string that ultimately led to her electoral undoing. It's hard to argue that a central figure in unearthing a hugely damaging Clinton scandal is merely a "resistance" crusader.

(7) For those of you wondering about the I-word (premature, in my view, but not necessarily wildly off-base, depending on where this leads), the legal definition of obstruction of justice -- and "wiggle room" defenses against it aren't the relevant standard on that front.  Congress determines what constitutes "high crimes and misdemeanors" as part of a political-legal process. (8) I'll leave you with another reminder of this president's illiberal impulses, buried in this same Times story:

Buried in our story: Trump said to Comey that he should consider putting reporters in prison https://t.co/7nlT6gaY1G


I understand and appreciate the president's frustration with leaks, but even taking a hard line on them should entail identifying and prosecuting leakers of classified materials (the parties committing crimes), not members of the press for printing them.  Overall, as far as new stories go, this one's a doozy.  It looks bad at first blush, and contains hints that there are more shoes left to drop.  As someone who frequently cautions against hair-on-fire freakouts, I'll just say that this one smells like it has the potential to metastasize, and leave it at that.  For now, let's resist the urge to screech "impeach" or "fake news," and see where the evidence leads.

UPDATE - And away we go. From the House Oversight Committee Chairman:

.@GOPoversight is going to get the Comey memo, if it exists. I need to see it sooner rather than later. I have my subpoena pen ready.