Analysis: Trump Has Selected an Excellent, Respected New FBI Director, and That Should Matter 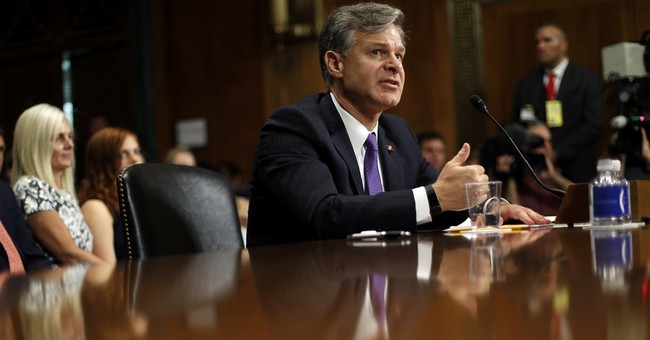 In today's environment of dizzying, whirling news cycles, it's occasionally imperative to hit the 'pause' button and circle back to assess fresh developments to previous collective freakouts.  When President Trump fired FBI Director James Comey, which was entirely within his legal authority, many critics raged that he was sacking the man in charge of investigating his campaign's alleged relationship with Russia -- worrying that he would replace Comey (against whom many of them had also railed, by the way) with a yes man.  My analysis at the time was to acknowledge legitimate potential causes for concern while cautioning that a wait-and-see approach was in order.  I argued that the things that would ultimately matter most were (a) the professionalism and independence of his nominee to succeed Comey, and (b) whether the Russia probe was negatively impacted in any way:

The degree to which we should be alarmed by Trump's decision depends on what -- or, more specifically, who -- comes next.  If the president selects a new FBI Director with sterling professional credentials, an established reputation for independence, and strong cross-partisan support and respect, Comey's sacking isn't a problem.  If, however, Trump picks a politically-compromised figure against whom accusations of yes-man-ism might credibly stick, that would be much more concerning.  Especially in light of the today's complex, messy political climate, the White House must nominate somebody who is above reproach.  Senate Republicans must embrace their constitutional duties with due gravity and must not rubber-stamp an unworthy nominee.

The president himself is not a subject of the investigation, it must be noted, but people in his campaign's orbit seem to be.  With that in mind, Comey's termination must not be allowed impact the FBI's work on [the Russia probe]...Up to this point, I've been satisfied that three concurrent investigations into the Russia matter is sufficient, despite the bipartisan dysfunction of the House effort.  In the event that any serious evidence should emerge indicating that last evening's dramatic development compromised the Justice Department's examination of the facts in any significant way, that would be an entirely unacceptable red flag.  An independent investigation would then become not only appropriate, but imperative.

Where do we stand on those two critical points today?  Despite the many subsequent, significant twists and turns to the Comey drama since early May, we appear to have landed in a healthy, stable place on the subject of his replacement.  FBI Director-Designate Christopher Wray's confirmation hearing was held yesterday, and he's winning rave reviews across the board.  Liberal Senators like Dianne Feinstein are sounding like they'll vote to confirm Trump's nominee, who has been praised by conservative Republicans and endorsed by Eric Holder and Sally Yates.  That is an unusual and rare coalition of support.  In the end, the president has selected someone with "sterling professional credentials, an established reputation for independence, and strong cross-partisan support and respect."  Some of the gravest commentaries on Comey's firing darkly suggested that Trump was ushering in the next stage of authoritarianism by dismissing law enforcement officials who stood in his way.  Heavy-breathing comparisons to Watergate's 'Saturday night massacre' proliferated.  And after all that, Trump chose somebody to lead the Federal Bureau of Investigation whose track record makes the incipient fascistic dystopia envisioned by some look like febrile paranoia.  He's made an excellent, reassuring, conspiracy-puncturing decision here, and that matters.  Or at least it should.

Second, even as Special Counsel Robert Mueller has taken the reins of the ongoing Russia probe (thanks to Trump's well-regarded Deputy Attorney General), it's important to recall that while the investigation was still being run out of the Bureau, both James Comey and his acting successor Andrew McCabe testified under oath that the process was pressing ahead, free from any political interference.  That also matters, or at least it should.  I realize that we've all lived through many fresh rounds of controversies, firestorms and hyperventilation -- some more warranted than others -- since the President of the United States fired the FBI Director.  But that was an earthquake event at the time, the direct fallout from which would be telling.  On that score, key evidence is now in, and critics' worst fears have not come to pass.  Just the opposite, in fact.  I'll leave you with soon-to-be FBI chief Christopher Wray's credible vow of fierce independence to a panel of Senators: