Comey Testimony: The Moments That Were Most Helpful, and Most Damaging, To Trump 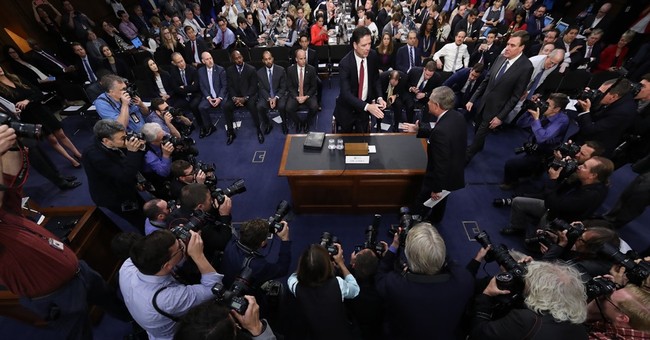 Over the span of nearly three hours today, Senators from both parties grilled former FBI Director James Comey about his relationship with President Trump, the circumstances of his firing, and various aspects of the federal probe into Russia's 2016 election meddling.  For the most part, the hearing was conducted professionally, with important lines of questioning emerging from each side of the aisle.  As we anticipated earlier, a number of aspects of Comey's testimony were profoundly unflattering to President Trump, including Comey's multiple assertions that he does not believe Trump to be a truthful and trustworthy person.  Other sworn statements undercut anti-Trump narratives, especially the notion that the president sought to stymie or shut down the Russia investigation, which goes to the crux of the cries for impeachment.  Here are the moments and revelations that stuck out to me, in both directions.

(1) Though Trump himself was never a subject of the Russia probe from its 2016 inception through the date of Comey's dismissal last month, his decision to ask the then-FBI chief to 'let go' of an ancillary criminal inquiry into potentially illegal misstatements from fired NSA Michael Flynn likely means that Special Counsel Robert Mueller will be examining whether Trump attempted to obstruct justice.  A self-inflicted wound:

In other words, Trump wasn't being investigated. Now he likely his. https://t.co/BXnUrY22BS
— David French (@DavidAFrench) June 8, 2017

(2) Comey clearly and repeatedly stated that he viewed the wishful request, or statement of hope (not necessarily "pressure" or an "order"), from the President of the United States as a directive.  Given the power relationships involved, this is a completely reasonable conclusion to reach, particularly considering Comey's eventual fate.

(3) The former director said that he felt compelled to memorialize his interactions with Trump in detailed memos -- a step he did not take with previous presidents -- because he believed Trump would likely offer misleading accounts about them in the future:

"I was honestly concerned he might lie" about our meeting - Comey says of Trump
— Katy Tur (@KatyTurNBC) June 8, 2017

Comey flatly accused the White House of lying on several occasions, and directly stated that Trump's televised claim that Comey, not he, had initiated their now-famous private dinner was untrue.  On this point, the former director seemed entirely credible.  Why does that matter?  Because if people are inclined to believe Comey in such a seemingly-minor dispute, it demonstrates that Trump's willingness to serve up cavalier, self-serving lies, even on relatively small details.

(4) In expressing puzzlement about the true motive behind his firing (on which he said he's taking Trump at his word, perhaps contradicting his previous stance that Trump can't be trusted), Comey repeatedly reminded viewers that the White House has told various and evolving stories about why he was sacked.  That evasiveness and shiftiness reflects poorly on the president's team to this day, and feeds the impression that they're hiding something.  Comey said he isn't sure if he was fired because he failed to act on the president's Flynn request, but believes that the reason did pertain in some way to the Russia matter.  For what it's worth, here's one potential alternative theory:

...Comey privately told him 3x that he wasn't a target of the investigation, but wouldn't say so publicly, even as other things leaked... 2/
— Guy Benson (@guypbenson) June 8, 2017

...and (wrongly) assumed bipartisan anger at Comey for various reasons would give him cover to make that call. Very plausible to me. 4/
— Guy Benson (@guypbenson) June 8, 2017

(5) Responding to a query about Trump's cryptic tweet about secret audio recordings of his conversations with Comey, the former director said he would waive any claim of privilege or privacy if such tapes exist and can be produced.  The White House press team continues to claim ignorance on the existence of the tapes, and Comey's reference to them -- and apparent eagerness for them to come out -- will ratchet up pressure on this subject.  Regardless of whether the recordings are real or were an empty threat, Trump shot himself in the foot with that tweet.  Impulsiveness and immaturity have consequences.

(1) Comey asserted that Trump was never the subject of any FBI investigation, and confirmed Trump's claim that he shared this information with Trump on at least three occasions.

(2) Trump supported the core goals of the wider Russia probe, said he thought it would be useful for any possible wrongdoing by people in his orbit to be exposed, and never sought to impede or shut down the FBI's work on this front.  Republicans are highlighting this exchange for good reason:

(3) Under questioning from Senators Cornyn and Cotton, Comey averred FBI agents have a duty to report crimes of which they are aware (subtext: including obstruction of justice, which Comey never alleged or reported), and that he never considered writing a letter of resignation as a form of protest of perceived instances of obvious wrongdoing or impropriety (context: as he had done in a previous administration).  Aside from writing the later-produced memo and eventually requesting that he not be put in any additional one-on-one settings with the president, Comey did not contemporaneously respond to Trump's inappropriate and 'stunning' requests with a level of seriousness or severity commensurate with criminal wrongdoing.  (In fairness, Comey's unexpected dismissal could have shifted the calculus).

(4) Senator Rubio's Q&A with Comey seemed to anger liberals on social media, who accused the Floridian of "carrying water" for Trump.  In fact, his inquiries were factual, on-point, and illuminating.  Especially useful was his summary of the three "asks" Trump made of Comey, which comes near the end of the clip below.  The first two, which look bad for Trump, both leaked into the media.  The last one, that Comey had informed Trump thrice that he wasn't under investigation, never did -- until Trump finally said it himself, drawing groans and eye-rolls from many in the press at the time.  Watch:

(5) Comey affirmed that a number of press reports about the Russia imbroglio, based on leaks and unnamed sources, were "dead wrong" on substance.  He knocked down one particular New York Times item, which was the subject of much hyperventilation, as factually false -- and his testimony about informing the president that he wasn't an FBI target blew up a big CNN "scoop."

Other interesting or important items from the hearing include: (1) former Attorney General Loretta Lynch attempted to interfere in the Clinton email affair by ordering Comey to refer to then-ongoing proceedings as a "matter," not an "investigation;" (2) despite having testified previously that Mrs. Clinton violated the statutory language of the Espionage Act with her improper email scheme, and running through her various lies about it, Comey again claimed there was no criminal case to be made against her last year; (3) Comey's refusal to comment on certain questions about the current Attorney General's contact with Russians during an open session may suggest that he isn't out of the woods, despite his recusal.  Two more:

(4) Some news outlets made a big deal out of this reply, but it's critical to note that shortly thereafter, Comey clarified that by punting on the question (partially because he's no longer in government) is was not implying anything 'nefarious.'  There is still zero evidence that Team Trump colluded with the Russians.

Did Trump collude with Russia? Comey: "It's a question I don't think I should answer in an open setting." pic.twitter.com/3JAQC6UM8e
— Axios (@axios) June 8, 2017

(5) Much has been made of the president's decision to clear the room prior to requesting that Comey 'let go' of the Flynn stuff.  Comey himself said that he was very concerned by it, and that the action raised red flags that something highly improper was happening -- and, importantly, that the president was cognizant of that sketchiness.  I agree with Sen. Collins that demanding other potential witnesses leave them alone, as well as the "expression of hope" itself, were both highly improper.  However, could this be a piece of context that might help explain why Trump may have been led to believe that holding private, one-on-one conversations on this subject with Comey wasn't inappropriate?

Plausible, alternative explanations for Trump's conduct, especially his "leave us alone" maneuver and his decision to fire Comey, are very important when considering whether the president's behavior and motives add up to a crime or impeachable offense.  As of now, I don't believe the sum total of proof gets us there.  But as Comey said a few times, Special Counsel Mueller's work isn't yet complete, and he'll be making those determinations based on all of the evidence he gathers.  Finally, let's never lose sight of the rock solid truth that a hostile foreign government used deliberate and sophisticated methods to try to impact an American presidential election.  That is not fake news; it is the bipartisan judgment of the relevant intelligence committees on Capitol Hill and of every US intelligence agency.  It is outrageous, and completely merits heavy scrutiny, a thorough investigation, and retaliatory action:

Julio Rosas
'Grave Sin': Nancy Pelosi Barred from Receiving Communion Over Abortion Stance
Spencer Brown
Should We Be Worried That Bill Barr Is Going to Cooperate With the January 6 Commission...Allegedly?
Matt Vespa
A European Country Is Working to Expand Abortion for Teenagers Without Parental Consent