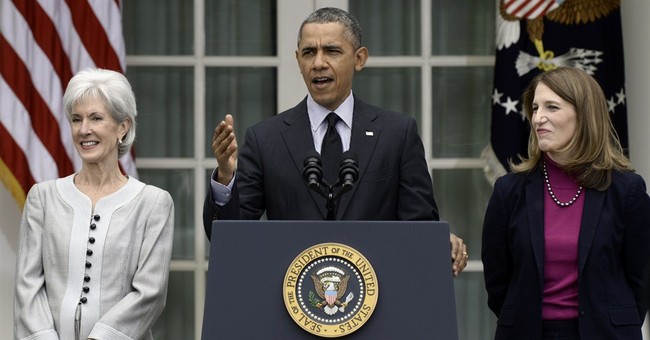 As liberals flail away at the Senate's newly-released healthcare bill, and conservatives scramble to adjust serious design flaws, Americans must not lose sight of an inescapable and crucial fact: The current law, which was exclusively written and passed by Democrats, is failing -- and those failures are getting worse.  Within the past 48 hours, two major insurance carriers announced plans to withdraw from Obamacare marketplaces in a slew of states.  Despite hiking individual market federal exchange premiums by an average of 105 percent over the past four years, in a quixotic effort to compensate for Obamacare's systemic adverse selection flaw, carriers are still losing hundreds of millions of dollars per state, per year.  For many, they can't sustain those financial blows any further, so they're pulling the ripcord:

These departures will only deepen the law's spiraling rate and access shock problems. Liberals, ever eager to blame their failures on others, are trying to pin this slow-motion collapse on Republican "sabotage," but that's a nonsense excuse.  It's true that uncertainty surrounding the future of the Obama administration's illegal cost-sharing subsidies is adding to this turbulent business climate, as is the lack of clarity over the future of 'repeal and replace.'  But the longterm trajectory -- toxic risk pools leading to major cost spikes and insurer pullouts -- long predates the Trump administration.  Indeed, this pattern was confirmed by Obama-era government data released just before the 2016 election.  The financial markets were fully expecting a Clinton victory, which would have guaranteed Obamacare's endurance, yet the pullouts and soaring premiums continued in spite of that anticipated policy continuity.  Because Obamacare was and is the problem.

Furthermore, the claim that Republican governors who "undermined" the law are at fault here is also bogus.  Those 'red' states that refused to establish their own Obamacare exchanges (several 'blue' states that tried doing so ended up crashing and burning) simply defaulted to the federal exchange, where massive rate increases are par for the course.  And perhaps the most Obamacare-friendly Republican governor in the country has been Ohio's John Kasich, who still doggedly defends his (increasingly expensive) decision to expand Medicaid.  Remind me: How are Ohioans faring under the law, again?  Sticker shock has also battered solidly Democratic states like Minnesota, Maryland and Connecticut.  I repeat, the problem is not Republicans.  The problem is Obamacare.  Republicans now have a real opportunity to improve the ugly status quo in important ways, but the first draft of the Senate bill could conceivably make matters worse, for reasons I outlined yesterday.  The GOP is still absolutely right to keep beating the drum on how their opponents' policies have made matters far worse for millions of people.  Here's Majority Leader Mitch McConnell highlighting various stories of real people feeling the brunt of Obamacare's shattered promises of affordability:

More Americans have been directly harmed by the current law than have been helped by it, putting the lie to the Left's thoroughly-discredited "win/win" propaganda.  If GOP replacement efforts end up faltering, the nation will be stuck with an unsustainable and deteriorating individual insurance market, resulting in even more pain for families.  Credibility-crippled Democrats believe the "solution" to these issues is more government control and more spending.  Many are on the record in favor of a socialized, government-run healthcare system.  This isn't merely a dreadful idea in terms of health policy and outcomes, it's economically ruinous.  Don't take my word for it; ask Democrats in Vermont and California, and the liberal editorial board of the Washington Post:

The government’s price tag would be astonishing. When Sen. Bernie Sanders (I-Vt.) proposed a “Medicare for all” health plan in his presidential campaign, the nonpartisan Urban Institute figured that it would raise government spending by $32 trillion over 10 years, requiring a tax increase so huge that even the democratic socialist Mr. Sanders did not propose anything close to it...A single-payer health-care system would face all of these political barriers to cost-saving reform and more. To realize the single-payer dream of coverage for all and big savings, medical industry players, including doctors, would likely have to get paid less and patients would have to accept different standards of access and comfort. There is little evidence most Americans are willing to accept such tradeoffs.

A left-leaning think tank found that single-payer healthcare would cost US taxpayers an additional $3.2 trillion per year on average; the entire current federal budget is around $4 trillion -- and we're already running historically-large annual deficits, as the $20 trillion national debt balloons.  There is simply no way to pay for that type of eye-popping spending increase without truly gigantic tax increases on middle and working class families -- all to pay for a worse system.  It's a genuinely atrocious idea in nearly every way.  On another level, why should voters listen to one word on heath care policy from the party that exclusively created the mess we're in, and that callously downplayed terrible, deadly corruption and abuses at the VA -- America's systemically flawed single-payer system that was designed to provide care to a small, discrete, sympathetic population venerated by both parties?  Alas, unwilling to own up to their calamitous failures, they're screaming about the "mean" and "evil" GOP proposal that's paid for with "blood money," or whatever.  Incredibly, these same people believe their tactics are too kind, civil, and courteous.