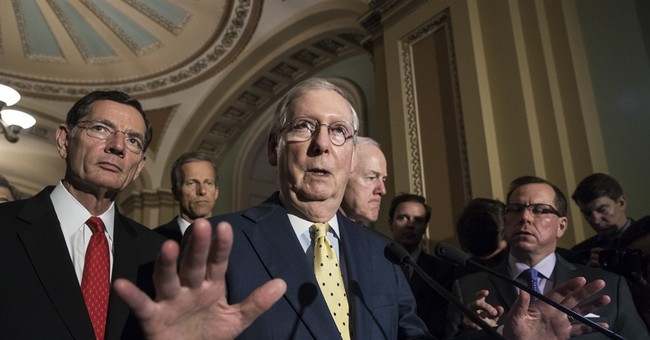 Senate Republicans released an initial version of their Obamacare replacement bill today -- with "aides stress[ing] the GOP plan is likely to undergo more changes to garner votes"  -- and very few people seem happy with it.  Many Democrats are predictably assailing the proposal in apocalyptic terms, calling it mean-spirited, draconian, etc.  But these same people bear responsibility for the ongoing and worsening Obamacare debacle, and have been wildly distorting Republican alternatives, so their credibility is in serious question.  Nevertheless, many conservatives and libertarians are also displeased with the bill, charging that it essentially waters down Obamacare while leaving its basic structure in place.  You know who agrees with them?  Infamous Obamacare architect Jonathan Gruber, who helped the Obama administration lie the current law into existence.  Brutal:

ACA architect Jonathan Gruber on the AHCA: "This is no longer an Obamacare repeal bill. That's good." https://t.co/vdwP2Ad3Sj


The Senate bill would repeal many of the law's mandates and taxes, then (lightly) scale back the generosity of government subsidies, pegging them to income levels, not just age -- a significant departure from the House bill.  Another major shift?  The upper chamber's version would maintain both Obamacare's "guaranteed issue" and "community rating" mandates at the federal level, meaning that all insurers would be required to offer coverage to people with pre-existing conditions at approximately the same price point as healthier consumers.  The House-passed legislation applies "guaranteed issue," but allows states the option to seek waivers on "community rating."  The Senate would eliminate that flexibility -- which was used to (unfairly) bludgeon the previous bill as an attack on people with pre-existing conditions, but was designed to help insurers offer more affordable plans to more consumers.  The new iteration does allow still states to seek waivers on Obamacare's costly "Essential Health Benefits" (EHBs), which have contributed to relentlessly rising costs under the Democrats' law. At Reason, Peter Suderman performs an unsparing vivisection of the bill:

[The proposal], at least in the near term, retains weakened versions of nearly all of Obamacare's core features while fixing few if any of the problems that Republicans say they want to fix. It is Obamacare lite—the health law that Republicans claim to oppose, but less of it. It represents a total failure of Republican policy imagination...Even more than the House plan, the Senate plan retains the essential structure of Obamacare's individual market reforms. It would likely result in fewer people being covered, and it would not stop the destabilization of the market.  Like the House plan, the Senate plan retains Obamacare's major insurance regulations, including the requirement to cover pre-existing conditions, at the federal level. Unlike the House plan, it does not allow states to apply for a waiver to opt out of those rules. It also eliminates Obamacare's health insurance mandate. Every state that has attempted this combination of coverage regulations without a mandate has seen a swift meltdown in the individual market. There is every reason to expect that the same would happen under the Senate plan, especially since Obamacare's exchanges were struggling with a too-small, too-sick enrollee pool even with the mandate in place. The Senate bill attempts to manage this instability by buying off health insurance companies with payments that Republicans previously argued were illegal and should be stopped...

...More generally, it represents a failure to think beyond the confines of the law that is already in place. At a fundamental level, the Senate plan accepts Obamacare's premises about the nature of health insurance and the individual market. It works from the assumption that the only way to make expensive health insurance cheaper is to subsidize it through the federal government...For Republicans, this might be the notable failure to think beyond the terms set by Obamacare. It means that [the] Senate bill not only won't be Obamacare repeal, it might not even be Obamacare lite. Instead, it might be Obamacare lite—later. And later could easily turn out to be never.

Suderman concedes that both chambers' versions of 'repeal and replace' legislation make serious changes to Medicaid, a massive government program that was already struggling and failing America's most vulnerable citizens before it was hugely expanded by Obamacare (compounding budget strains and access shock problems).  But another conservative writer and healthcare expert, Philip Klein, expands on what Suderman means when he worries that "later could easily turn out to be never" vis-a-vis these Medicaid reforms:

This is a bill that does more to rescue Obamacare than it does to repeal it. Lots of up front bailout $, promised cuts come later.

Conservatives asked to swallow lots of up front $ in hope that after 2 prez elections from now--in 2025-- Medicaid spending gets restrained.

The Senate bill injects billions of taxpayer dollars to stabilize Obamacare in the immediate future, then begins to phase out the Medicaid expansion between 2019 and 2021.  Fully shifting Medicaid to a capped per-capita program (a welcome conservative reform) pegged to a low spending growth index (lower than the House proposal) won't happen until 2025.  Raise your hand if you can envision a future Democratic president blocking these changes, or squeamish Republicans joining with Democrats to kick the can down the road further as a politically demagogue-able "cliff" approaches -- just as we saw for nearly two decades under Medicaid's so-called "doc fix."  When Democrats propose 'more money today, offset by bigger savings far into the future,' conservatives often scoff.  Similar skepticism is warranted here.

The biggest concern that I continue to have, which is even more pronounced under the Senate bill, is that these GOP replacement plans will fail to reverse Obamacare's fundamentally flawed dynamic that continues to force costs skyward and carriers out of state marketplaces: Unsustainable risk pools.  As Suderman notes above, this legislation would eliminate the individual mandate tax (good!) -- but like Obamacare, it also still requires every insurer in America to provide coverage to all comers, while barring significant cost differentials between healthy consumers and people with pre-existing conditions.  That's not insurance.  This blend of mandates creates an obvious incentive for healthy people to simply bypass the expense of paying monthly premiums, then sign up for coverage after suffering an accident or falling ill.

The efficacy of Obamacare's individual mandate tax to force people into the marketplace has proven far weaker than experts projected, but it at least represents some enforcement mechanism.  The House bill compensates for the loss of the mandate with "continuous coverage" rules and a provision under which insurers could charge non-continuously-insured consumers seeking new coverage a 30 percent surcharge on rates for one year.  Puzzlingly, the new bill excludes these mechanisms, leaving...nothing, basically.  Suderman warns that states that have attempted this regulatory combination (guaranteed issue, plus community rating, minus a mandate) have witnessed a catastrophic individual market death spiral; an inevitable outcome, in light of basic economics.  Washington state's failed experiment in the 1990's is an especially relevant cautionary tale.

Republican aides say that this glaring shortcoming may be addressed as the legislation is amended.  But why they decided to roll out a bill that, as written, would double down on Obamacare's single worst flaw (even with an intent to mend it later) is beyond me.  Yes, the Senate bill would throw tens of billions of dollars at insurers in the near term to try to stabilize the individual market, but what happens when those bailout-style funds start to expire?  Especially if the composition of individual market risk polls are still in dicey shape?  We'd have yet another "cliff" with politicians strongly incentivized to punt the issue a few more years into the future.  More spending, uncertainty, and dysfunction, in perpetuity.  In short, while there are plenty of individual pieces of the Senate bill that would bring about welcome improvements over Obamacare, the larger puzzle doesn't seem structurally sound.  If any version of this thing is going to pass, it's going to require substantial changes on some big points. Many Republicans are saying that's just fine because today's release is merely an opening bid, but if that's the case, the proposed timeline for a floor vote next week is ludicrous:

Struggling to envision a (successful) floor vote on this thing next week. Talks pushed into July, or bandaid-ripping defeat more likely.


A group of Senate conservatives have already laid down a marker that they can't support the bill in its present form, and other Senators are still digesting the bill for the first time.  Given the amount of work ahead, and the divides that must still be bridged, arriving at an up or down vote by the end of next week seems, shall we say, insanely ambitious.  Maybe Mitch McConnell is using an artificial deadline to focus minds sooner rather than later, privately understanding that the process will need to spill well into July, with an eye toward a vote before the August recess.  Or maybe McConnell knows that his conference's ideological gaps are irreconcilable, so he's rushing toward a floor vote in the full knowledge that it'll fail -- the logic being that he'd rather just give it a shot, and get it over with.  I'm inclined to lean toward the former scenario, but I'm not the only conservative who's contemplated the latter as a real possibility.  Stay tuned.  Perhaps some strategery is afoot:

This is a very, very good point by @russellberman. Keep in mind, re: early GOP objections to the Senate bill. https://t.co/nDFssqewN2 pic.twitter.com/wAM1tXWApr


I'll leave you with President Obama torching the Senate bill.  As you read his painfully Obamian critique, kindly recall that almost every major assertion and promise he made about the current mess that bears his name was egregiously and harmfully wrong:

Obama's FB post is a good reminder to re-up my piece on credibility: https://t.co/q3sQqOKFEl