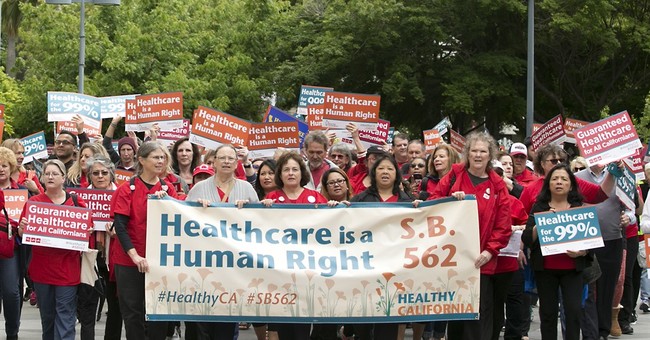 On the state level, single-payer is a disaster. Guy and Christine both wrote how California’s single-payer initiative is insanely expensive, costing around $400 billion a year. It recently passed the State Senate, but without any clear mechanism on how the Golden State will pay for it. PolicyEd, a project of the Hoover Institute, had this good video on single-payer, noting that government will have to reduce access to care, medicines, and certain procedures to control costs. They also cited nations that have single-payer, like the United Kingdom and Sweden, citing the long wait times for patients, along with lower health outcomes for stroke, heart disease and cancer. It’s so bad that some residents from these countries are seeking private care outside of the country. So, we know that single-payer is a socialist’s dream that will increase the tax burden of everyone for reduced access to care. It’s so bad that even The Washington Post acknowledged the high price tag:

The single-payer model has some strong advantages. It is much simpler for most people — no more insurance forms or related hassles. Employers would no longer be mixed up in providing health-care benefits, and taxpayers would no longer subsidize that form of private compensation. Government experts could conduct research on treatments and use that information to directly cut costs across the system.

But the government’s price tag would be astonishing. When Sen. Bernie Sanders (I-Vt.) proposed a “Medicare for all” health plan in his presidential campaign, the nonpartisan Urban Institute figured that it would raise government spending by $32?trillion over 10 years, requiring a tax increase so huge that even the democratic socialist Mr. Sanders did not propose anything close to it.

A single-payer health-care system would face all of these political barriers to cost-saving reform and more. To realize the single-payer dream of coverage for all and big savings, medical industry players, including doctors, would likely have to get paid less and patients would have to accept different standards of access and comfort. There is little evidence most Americans are willing to accept such tradeoffs.

Well, let’s just say that liberals did not take this admission too kindly.

"were scum and dont REALLY care about humans,so we publish this idiotic article to sink neoliberalism deeper into baby boomers subconscious" https://t.co/tdslpzGYWF

Democracy Dies In Darkness, friends. Anyway, here's our coverage of the Senate preparing to strip health care from tens of millions. pic.twitter.com/mQ385A4w8P

Go put a big jar of marmalade up your ass

Bonus: That time Nancy Pelosi said she wasn't worried about California's single-payer price tag, among other things, like how Obamacare is pretty much a stepping stone to this abysmal system.