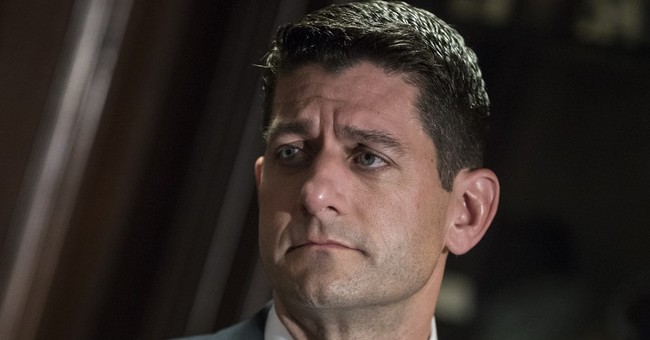 This is probably a smart political move by the White House, to be honest, even though it will please neither side of this debate. By way of background, the Obama administration started paying bailout-style cost-sharing subsidies to insurers under Obamacare, reimbursing carriers for some of the costs associated with lowering expenses and deductibles for certain lower-income consumers.  House Republicans sued, contending that Congress never appropriated those billions of dollars, rendering the program illegal. Thus, Trump is faced with a dilemma: Either (a) side with Obama's possibly-illegal scheme in the name of preventing even more disruption in the law's marketplaces -- or (b) side with Republicans by ending the program, which would instantly result in double-digit premium hikes and prompt even more insurer departures.  Amid reports that the president was leaning toward the latter option, the White House has reportedly chosen door number three:

The Trump administration and House of Representatives Monday asked a federal court for another 90-day delay in a lawsuit over Obamacare insurance subsidies, undermining the future of the health care marketplaces as insurers look for certainty from the government before committing to offer coverage next year. “The parties continue to discuss measures that would obviate the need for judicial determination of this appeal, including potential legislative action,” the House and White House wrote to the court. If the request is approved, the parties would have to file another update in 90 days. “We continue to work with the Trump administration on a solution,” said AshLee Strong, spokeswoman for Speaker Paul Ryan. The suit, House v. Price, centers on Obamacare's cost-sharing program, which reimburses health insurers to help low-income people make co-payments at the doctor or hospital. The case was brought by House Republicans during the Obama administration. But the case has taken on added significance as Republicans try to repeal the health law: without the $7 billion in payments, insurers say they cannot remain afloat in the Obamacare markets.

Legally speaking, Obamacare opponents believe these payments, which they see as unlawful, should be cancelled. Politically, it's not so simple, and that's by design. Yanking back those un-appropriated dollars may be the correct constitutional move, but it would have an immediate and harmful impact on the existing system. Maddeningly, this is something of a perverse win-win for Democrats. If Trump declines to uproot Obama's unauthorized program, a controversial aspect of Obamacare remains intact, now with the imprimatur of a Republican administration attached to it. Insurers and some patients would benefit, at least in the short term. But if Trump were to vitiate the program, Democrats would have a field day. They'd blast the White House for its "mean-spirited" decision to screw over low-income Obamacare consumers, they'd demand that the Republican Congress formally allocate the disputed dollars (pressuring Republicans into a "fix" that would infuriate the base), and they'd proceed to blame all inevitable future Obamacare meltdowns on the GOP. We all know that the failing law is bound to keep failing, with even higher rates and even fewer options for consumers on the horizon in 2018. Democrats have already trotted out the lame talking point that the law (for which they are 100 percent responsible) is being "undermined" by Republican-fueled "uncertainty."

In reality, this downward spiral long pre-dates the Trump presidency, and the same exact problems would still beset Democrats' partisan healthcare scheme if Hillary Clinton had won the election. The dysfunctional dynamics that are sinking Obamacare are inherent to the fundamentally and fatally flawed law. If Trump pulls the rug out from under insurers in an even more jarring way by abruptly ending his predecessor's questionable reimbursement mechanism, the resulting negative outcomes will be entirely laid at Republicans' feet. Critics could then more persuasively argue that the anti-Obamacare party owns part of the Obamacare mess. With the administration on the defensive after two brutal weeks of PR, and with Trump abroad on his first international trip as president, the White House has apparently chosen not to pick a massive new fight with Democrats at the moment. Can, kicked. One of the arguments Team Trump is likely to employ to defend this delay is that the Senate is currently doing its work on the House-passed healthcare bill, so it's more prudent to let that process play out, rather than throwing a politically-volitile grenade into the mix while those delicate negotiations are underway. Speaking of which, everyone involved is waiting on the CBO's score of the latest AHCA version, which could conceivably require the House to rejigger the bill and take another vote. Gulp.

Meanwhile, Republican lawmakers continue to be physically threatened and menaced over their efforts to keep an oft-repeated campaign promise to clean up Democrats' deteriorating healthcare disaster. The status quo is failing badly and hurting millions of people -- and the pain is going to get significantly worse, even if Trump doesn't touch Obama's cost-sharing provision. The House bill is flawed and needs improving, but angry constituents lambasting members of Congress (watch this recap of Rep. Tom MacArthur's fury-filled forum) over the AHCA's supposed outrages ("failing" to protect people with pre-existing conditions, or "making" rape a pre-existing condition) are misguided, ignorant or dishonest. I'll leave you with Mitch McConnell's recent floor speech, which remained relentlessly on-message: