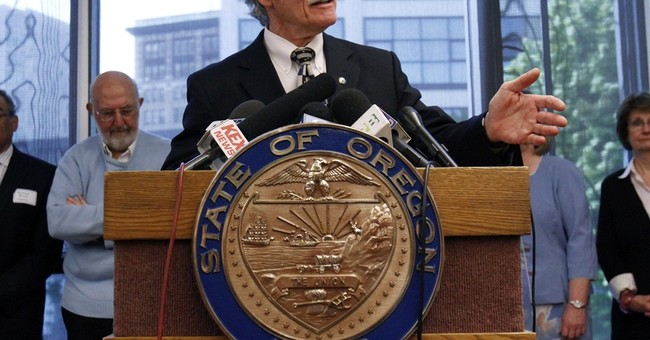 Of all the Obamacare exchange horror stories -- and there have been plenty -- Oregon takes the cake. After months of abject failure, serious evidence of criminal fraud, and hundreds of millions of taxpayer dollars flushed away, the state will announce that it is abandoning its exchange in favor of the federal Healthcare.gov platform. Oregon's website was supposed to be ready for the open enrollment period, starting on October 1, 2013. It never launched, and now it never will. The Washington Post reports:


The Obama administration is poised to take over Oregon’s broken insurance exchange, according to officials familiar with the decision, who say that it reflects federal officials’ conclusion that several state-run marketplaces may be too dysfunctional to fix. In public, the board overseeing Cover Oregon is scheduled to vote Friday whether to join the federal insurance marketplace that already sells health plans in most of the country under the Affordable Care Act. Behind the scenes, the officials say, federal and Oregon officials already have privately agreed that closing down the system is the best path to rescue the state marketplace, the country’s only one to fail so spectacularly that no residents have been able to sign up for coverage online since it opened early last fall. The collapse of Oregon’s insurance marketplace comes as federal health officials are also focusing intensely on faltering exchanges in two other states, including Maryland.


Oregon and Maryland are controlled by pro-Obamacare Democrats. This is an embarrassing sound byte, in retrospect:

“It’s going to be smoother in places like Maryland where governors are working to implement it rather than fight it. (Applause.)” — President Barack Obama, Sept. 26, 2013


Here's a WaPo story from last May explaining why Oregon "may be the White House's favorite health exchange." Oops. But even that's not quite as embarrassing as those hippie-dippy, taxpayer-financed ads promoting a website that would never be functional:

So, exactly HOW MUCH federal taxpayer money was FLUSHED on Oregon's FAILED Obamacare exchange? This much --> pic.twitter.com/kjHUuoOaus


Elsewhere in the Obamacare "winning streak," the Wall Street Journal reports on how small businesses are wrestling with the new law. One pull quote: Employers “have begun restructuring their businesses, reducing their employees' hours, for example, or trimming their total head counts to fewer than 50 full-time workers.” We've been writing about the additional bouts of yet-to-come coverage cancellations for months; in addition to impending turmoil within the small group market, Americans on so-called "fixed benefit" plans are also about to experience Democrats' "lie of the year" firsthand. I'll leave you with this:


2. Aetna chief executive Mark Bertolini says premium increases in those 17 states, which encompass 132 rating areas, will be quite literally all over the map in 2015. He said those increases will range from "the very low single digits" to "some that will be over double digits." That depends on the number of members, the demographics of memberships and what limited information the company has about new members, he said.

3. Bertolini said about half of the company's premium increases, whatever they turn out to be, will be attributable to "on the fly" regulatory changes made by the Obama administration. He cited as an example the administration's policy of allowing old health plans that were supposed to expire in 2014 to be extended another three years if states and insurers wanted to.