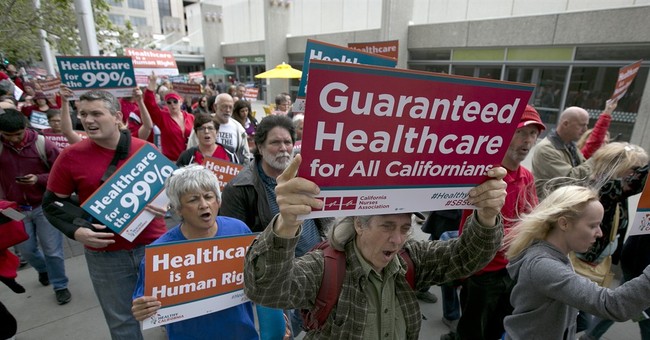 And now, a glimpse into our possible future, courtesy of deep blue California. And when I say "deep blue," I mean so blue that the Republican Party didn't even qualify a statewide candidate for the general election ballot in the 2016 US Senate race. I mean so blue that the state's creaking, under-performing Obamacare-expanded Medicaid program now has one-third of the entire population on its rolls (with state bookkeepers just fessing up to a $1.9 billion accounting error that camouflaged how deep in the hole it is). I mean so blue that the state's long-term fiscal health is being weighed down by roughly $400 billion in "rapidly growing" unpaid-for promises known as unfunded liabilities, contributing to one of the worst bond ratings in the country.  I mean so blue that Democrats' pet high speed rail project is already tens of billions of dollars over-budget and wildly behind schedule, partially due to astonishingly restrictive environmental regulations and a lawsuit-happy legal climate.  I mean so blue that in spite of all of the red flags flapping in these fiscal headwinds, a key committee in Sacramento recently advanced legislation to implement a single-payer, government-run healthcare system in the state:

A sweeping measure that would establish government-run universal healthcare in California cleared its first legislative hurdle Wednesday as scores A of supporters crammed into the Capitol to advocate for a single-payer system. The Senate Health Committee approved the measure on a 5-2 vote after a nearly three-hour hearing, but Democrats and Republicans alike signaled unease with the major question still unanswered in the legislation: how the program would be paid for. The bill, SB 562, would establish a publicly run healthcare plan that would cover everyone living in California, including those without legal immigration status. The proposal would drastically reduce the role of insurance companies: The state would pay for all medical expenses, including inpatient, outpatient, emergency services, dental, vision, mental health and nursing home care. The measure says the program would be funded by "broad-based revenue," but does not specify where that money would come from.

Healthcare for everyone, including illegal immigrants, paid for by mumble-mumble "broad-based revenue" mumble-mumble. Details to come. Well, here's one brand new detail -- a price tag. Surprise:

It would cost $400 billion to remake California’s health insurance marketplace and create a publicly funded universal heath care system, according to a state financial analysis released Monday. California would have to find an additional $200 billion per year, including in new tax revenues, to create a so-called “single-payer” system, the analysis by the Senate Appropriations committee found. The estimate assumes the state would retain the existing $200 billion in local, state and federal funding it currently receives to offset the total $400 billion price tag...Steep projected costs have derailed efforts over the past two decades to establish such a health care system in California. The cost is higher than the $180 billion in proposed general fund and special fund spending for the budget year beginning July 1. Employers currently spend between $100 billion to $150 billion per year, which could be available to help offset total costs, according to the analysis. Under that scenario, total new spending to implement the system would be between $50 billion and $100 billion per year.

The new system would more than double the cost of California's already-swollen annual budget, with no specific pay-fors in the offing.  Even if you assume that employers would dump all of their employees into the government system (how would that prospect go over with voters?) and the state could magically repurpose all of those dollars to fund the new scheme, California would still be $50-100 billion short.  Every single year.  This would require massive, across-the-board, economy- and -job-crushing tax increases on everybody -- including middle-income and working-class earners.  In other words, despite Democrats' leading gubernatorial contender actively campaigning on this ridiculous fantasy, California's single-payer dreams are likely to go the way of Vermont's.  Flashback to 2014:

For decades, liberal activists yearned for a European-style, single-payer health system that they argued would lead to more affordable, efficient, and comprehensive medical coverage for all citizens. When Vermont four years ago enacted a landmark bill to establish the nation’s first single-payer health care system, they saw their long-sought dream about to be fulfilled. But reality hit last month. Governor Peter Shumlin released a financial report that showed the cost of the program would nearly double the size of the state’s budget in the first year alone and require large tax increases for residents and businesses. Shumlin, a Democrat and long-time single-payer advocate, said he would not seek funding for the law, effectively tabling the program called Green Mountain Care.

Government healthcare advocates remain undeterred, waving off the VA disgrace as an overblown Republican attack on an under-funded program (false), and insisting that a nationwide federal system would be more feasible than state-level experiments.  They argue that the national government would wield more power to negotiate lower prices for services and drugs.  Setting aside the inhibited medical innovation and state-mandated rationing that a socialized system would inflict, a nationwide single-payer regime would also cost a fortune, necessitating much higher taxes across many income brackets.  Many of the European nations often cited by leftists as models for the US impose staggeringly-high payroll taxes on their citizens, with double-digit consumption taxes (like V.A.T.'s) piled on top.  Much, much higher taxes for much more government -- while relying on the United States military to provide a backstop on defense.  Oh, and a number of those "social democracy" Euro-paradises are moving back toward private coverage, as public systems falter.  Scott Atlas, a medical doctor and senior fellow at the Hoover Institution, highlighted the still-ongoing phenomenon in 2014:

About six million British citizens buy private health insurance and about 250,000 choose to pay for private treatment out-of-pocket each year—though NHS insurance costs $3,500 annually for every British man, woman and child. The socialized-medicine model is struggling elsewhere in Europe as well. Even in Sweden, often heralded as the paradigm of a successful welfare state, months-long wait times for treatment routinely available in the U.S. have been widely documented. To fix the problem, the Swedish government has aggressively introduced private-market forces into health care to improve access, quality and choices. Municipal governments have increased spending on private-care contracts by 50% in the past decade...Swedish primary-care clinics and nursing facilities are increasingly run by the private sector or receive substantial public funding...Though Swedish economist Per Bylund calculates that the average Swedish family already pays nearly $20,000 annually in taxes toward health care, about 12% of working adults bought private insurance in 2013, a number that has increased by 67% in five years, according to the trade organization Insurance Sweden. Almost 600,000 Swedes now use private insurance, though they are "guaranteed" public health care.

Atlas and other single-payer critics have also documented how, despite its flaws and high costs, the US healthcare system consistently delivers significantly superior cancer survival rates, far greater access to care (including new treatments and technology), and much shorter wait times for care than more government-heavy models provide.  This data is from 2009, but Atlas says its key trends and results remain in the American system's favor today.  He's also emerged as a savage critic of a WHO study published in 2000, which is often cited in critiques of the American system and in support of increased government intervention.  That study's findings placed greater weight on 'equality' than actual healthcare outcomes, and used methodological sleight of hand to distort the quality of American care.  For instance, he and others also expose how one seemingly-ubiquitous, and bogus, talking point was concocted:

WHO ranked the U.S. 42nd in life expectancy. In their book, The Business of Health, Robert L. Ohsfeldt and John E. Schneider of the University of Iowa demonstrated that this finding was a gross misrepresentation. WHO actually included immediate deaths from murder or fatal high-speed motor-vehicle accidents in their assessment, as if an ideal health-care system could turn back time to undo car crashes and prevent homicides. Ohsfeldt and Schneider did their own life-expectancy calculations using nations of the Organisation for Economic Co-operation and Development (OECD). With fatal car crashes and murders included, the U.S. ranked 19 out of 29 in life expectancy; with both removed, the U.S. had the world’s best life-expectancy numbers...

So if you include homicides and instant-death car wrecks in the statistics -- neither of which are reflections on the efficiency or effectiveness of a healthcare system -- the US ranks 19th in OECD life expectancy.  That looks bad.  Eliminate those factors, however, and the US shoots up to the top of the heap: Another data point that's frequently tossed about as an indictment of US healthcare is our "high" infant mortality rate. When you dig into the numbers, America fares so poorly in this category because, well, we count dead babies differently than they do in other places: "In most developed nations, premature births are recorded in the statistics as miscarriages or stillbirths. The lives that doctors in those places don’t attempt to save are never recorded as 'live births'...Many countries don’t try to save infants born prematurely or with severe birth defects. U.S. doctors go to extraordinary lengths to give these infants a chance at life. Such best efforts often fail, and the death becomes a misleading statistic. When the CDC excluded births before 24 weeks of gestation, the American infant-mortality rate fell from 6.1 infant deaths per 1,000 live births to 4.2, a number comparable to the rest of the developed world’s figures." Put bluntly, American doctors try to harder to save more babies, and doctors in other countries don't tally certain births as "live births" the way we do.  And our stats suffer because of our moral choice to prioritize attempting to save these extremely vulnerable lives.

Bottom line: If you're craving a "fair" system that stifles innovation, rations care, limits access, creates lengthy wait lists for basic medical services, and has worse survival rates for serious conditions like cancer, single-payer is the way forward.  And even if that all sounds acceptable to you, good luck paying for it.