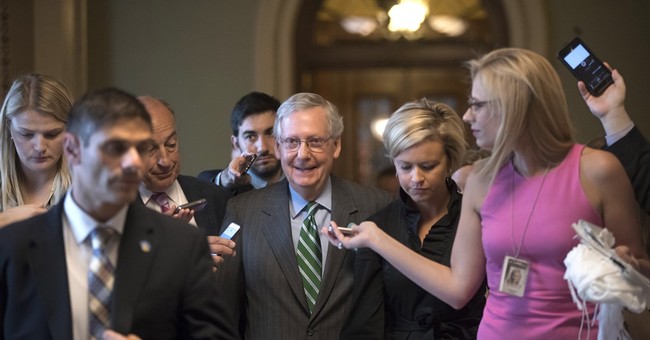 Having hit the Senate GOP's healthcare bill pretty hard last evening, I feel obliged to present a much sunnier assessment for your edification and consideration.  Avik Roy, a conservative healthcare policy expert whose work we have cited on many occasions is a big fan of the new proposal, taking to Twitter to declare it a legislative triumph.  Agree or disagree -- and I'll do a bit of both below -- the profane, unhinged, substanceless replies from leftists accusing Roy of supporting murder, with more than a dash or two of overt racism, are appalling.  Many liberals appear incapable of good-faith debate over good-faith policy differences.  More on that in a moment, too.  But first, Roy's take:

Finished reading the Senate HC bill. Put simply: If it passes, it’ll be the greatest policy achievement by a GOP Congress in my lifetime.


A few highlights from his Forbes analysis, published this morning:

In March, when House Republicans published their bill to replace Obamacare—the American Health Care Act—I described it in Forbes this way: “GOP’s Obamacare Replacement Will Make Coverage Unaffordable For Millions—Otherwise, It’s Great.” I meant it. There were great things about the House bill, in particular its far-reaching reforms of the Medicaid program. But Paul Ryan’s bill contained a fatal flaw. Its flat tax credits, which provided identical assistance to the poor and the wealthy, would price millions of near-elderly low-income workers out of the insurance market and trap millions more in poverty. Fortunately, buried in the House bill was a way out of the morass. Section 202 of the bill contains a transitional schedule of tax credits that was meant to serve as a bridge between the old Obamacare system, ending in 2017, and the new Paul Ryan system, beginning in 2020.

It turns out that if you simply kept that bridge in force, and tossed overboard the Paul Ryan flat tax credit, you’d solve all of these problems with the House bill. By making that change, the near-elderly working poor would be able to afford coverage, and the poverty trap would be eliminated.  And that’s precisely what the Senate bill did! Section 102 of the Senate bill—the Better Care Reconciliation Act of 2017—closely mirrors Section 202 of the House bill, with age- and means-tested tax credits up to 350 percent of the Federal Poverty Level. Making this change not only solves the problems I described above. It also makes it easier to reform the Medicaid program.

I should note at this point that one of my policy concerns about the House-passed bill is that it would hang lower-income near-seniors out to dry with skimpy tax credits, pricing many of them out of affordable coverage.  This change, and it's a significant one, addresses that problem.  There's an argument to be made that the Senate bill overcompensates, applying a tax credit framework that closely resembles Obamacare to the entire replacement law, rather than more narrowly targeting assistance to populations who would be disproportionately impacted under the House's age-based system.  There are good reasons why many conservatives are objecting that "repeal" utilizes a whole lot of Obamacare's plumbing.  Roy goes to cheer the proposal's Medicaid reforms, talking up vastly increased flexibility for states, and explaining why the system is failing so many people as it's currently constituted.  He also briefly touches on my number one problem with the Senate bill:

There’s one key flaw in the Senate bill. It had been originally reported that the bill would contain a six-month waiting period for those who did not sign up during open enrollment each winter. Such a waiting period is important to ensure that people don’t jump in and out of the insurance pool when their sick or healthy, respectively. But no such waiting period was included in the bill, reportedly because the Senate is still trying to work out how such a waiting period would work within Senate parliamentary rules.

This version of the Senate plan has no meaningful and lasting mechanism (front-end "stabilization" via bailout-style payments to insurers don't count) to prevent an individual market death spiral.  You can't keep Obamacare's dual mandates requiring all insurers to sell plans to people with pre-existing conditions at approximately the same price points as healthy consumers without some form of strong incentive to bring healthy people into the market before getting sick or hurt.  Otherwise, people make the eminently rational (and market-destroying) choice to free load, saving hundreds on monthly premiums, secure in the knowledge that if they should need care, they can sign up for price-controlled "insurance" as needed.  The House bill had a "continuous coverage" requirement on this front, as well as allowing carriers to apply a 30 percent surcharge to a non-continuously-insured consumer who suddenly shows up to buy a plan with a pre-existing condition (the House bill also established several layers of protections for people with such conditions).  I was never confident that even these elements were adequate to address the challenge.  Yet the Senate's version excludes both provisions, even passing over the (arguably less robust) incentive-imposing idea of a half-year waiting period for new customers who failed to sign up during annual open enrollment.

The individual mandate imposed an unconstitutional requirement that every citizen purchase a product; it was only salvaged by a last-minute feat of intellectual gymnastics by Chief Justice Roberts, reimagining it as a tax.  Its success in coercing people to enter Obamacare's marketplaces has been wildly exaggerated by the Congressional Budget Office, which continues to ignore actual data while imputing mystical powers to the mandate's effectiveness.  Still, it clearly has had some significant impact, but not enough of one to stave off a deteriorating Obamacare spiral.  Unless a replacement bill both (a) brings down costs significantly for many Americans in the individual market -- especially younger and healthier ones -- and (b) strongly disincentives free loading as a viable choice, it will fail.  In fact, it would likely magnify Obamacare's deepening failures.  Perhaps the Senate intends to insert these ideas during the amendment process.  Perhaps they've left them out due to concerns over 'Byrd Rule' compliance under reconciliation.  Regardless, enacting a law that lacks essential death-spiral-prevention measures would be extremely reckless.  It's worse than doing nothing -- which is saying a lot.

While I agree with Roy's support for needed Medicaid reforms, I'm not convinced the Senate's offering is necessarily superior to the House's.  The upper chamber punts many of the biggest Medicaid changes to beyond the 2020 and 2024 elections, raising my cynicism about whether those out-year, politically-difficult changes will ever actually occur.  And because the Senate bill 'makes up for' this more gradual glide path by instituting a more stringent growth rate for Medicaid's capped spending increases, I worry that political pressures to alter or abandon those changes would become more potent because the "cliff" would look steeper as it approaches.  I also agree with Philip Klein that one of Roy's comparisons employed to dismiss conservative critics' complaints is unfair -- even as someone who would be willing to support a bill that at least makes relatively modest improvements over the status quo (I'm not sure the Senate proposal does that, yet).  All that said, the Left's stupid, self-righteous, nasty demagoguery against this bill is insulting and irresponsible.  For a bunch of people who like to claime that the 2011 shooting of Rep. Gabrielle Giffords was caused by heated right-wing rhetoric (this was an entirely scurrilous and baseless charge), they seem awfully eager to smear Republicans as a bunch of greedy, blood-thirsty killers.  Disgusting:


In this debate, Warren is playing the role of Sarah "Death Panels" Palin (though Palin never perpetrated a racial hoax to benefit her career), against whom every fact-checker under the sun sprung into action. Most Democrats have refrained from this degree of wild-eyed, hysterical venom, instead coalescing around the talking point that the Senate bill is "mean" -- even more so than the House bill.  This is an object lesson in bad-faith argument.  The House legislation was excoriated by liberals for failing to guarantee "community rating" cost control regulations for people with pre-existing conditions, and for offering insufficiently generous tax credits to older, low income Americans.  The Senate iteration substantively addresses both complaints, yet was promptly declared even worse than the House-passed legislation, and not for the substantive reasons I've laid out above.  They were always going to dial up the freakout to eleven, regardless of what was in the legislative language.  Many on the Left have shifted away from the previous complaints to Medicaid, shouting about how the GOP would 'virtually zero out' the program, which is flatly untrue.  Reversing an unsustainable expansion is wise policy.  And decreasing the rate of growth is not a "deep cut," let alone an elimination of the program.

But if Democrats want to talk about what's "mean," Republicans can easily engage them on those terms.  It's mean to prop up an objectively failing law that's growing more dysfunctional and harming more people -- and for what?  To protect Obama's legacy, dressed up as 'helping people'?  It's mean to take a government program that was already badly betraying America's most indigent and vulnerable citizens and expand it to millions of new people, compounding budget and access strains.   And it's mean to accuse your opponents of 'killing' people over public policy disagreements, especially when your own policy has not saved American lives, in the aggregate.  In fact, as death rates have risen under Obamacare, the stats are worse in Medicaid expansion states than non-expansion states.  That's data.  Since Democrats seem content to casually throw around slanderous, motive-impugning, sloppy causation arguments, do Medicaid expanders have "blood on their hands," under Sen. Warren's disgraceful standard?  I'll leave you with a Politico story about the wiliness of Senate Majority Leader Mitch McConnell.  I've expressed my deep skepticism about a successful vote occurring next week, but if anyone is capable of delivering a surprise, it's him:

I can tell you McConnell doesn't have the votes right now. I can also tell you his colleagues think he will get them https://t.co/iGeb3LM6YZ