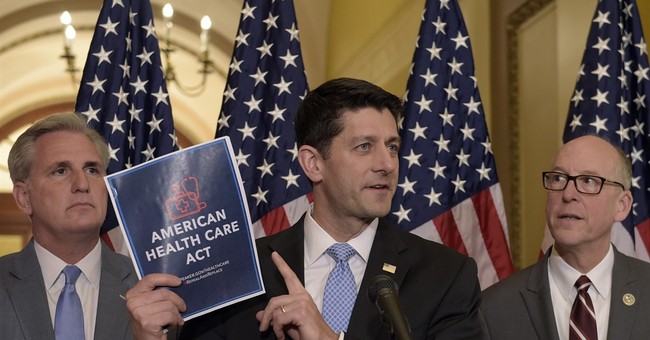 As expected, the Congressional Budget Office's analysis of the Trump/Ryan Obamacare replacement bill landed with a thud in Washington, D.C.  Many of the resulting headlines have blared about millions of people "losing coverage" under the plan -- 14 million in 2018, and 24 million by the end of the ten-year budget window. Reports that the White House's internal projections were even worse were flat wrong. See White House Communications Director Michael Dubke's quotes in this piece for a convincing explanation. Either way, let's face it: Fewer people being covered (evergreen reminder: 'coverage' does not equal access or care) under an alternative plan is hardly surprising.  When the federal government stops legally requiring people to do something -- especially something they don't like and can't afford -- fewer people will do it. That's basic economics. The GOP responded to the data in different ways. The White House slammed the report, correctly reminding people that CBO was way off in its Obamacare enrollment forecasts, missing the 2016 mark by...11 million people, based on initial estimates. Some Congressional Republicans, however, touted the CBO's more positive findings:

(1) The bill would cut federal spending, financed by taxpayers, by $1.2 trillion.

(2) The bill would slash Obamacare-created taxes by $883 billion.

(4) After a temporary bump in premiums, the bill would reduce monthly coverage rates by ten percent.

Many defenders of the American Health Care Act (AHCA) have also noted that the predicted premium decreases do not take key factors into account, which would point to the emergence of even more affordable rates. They argue that the second and third "phases" of the overall plan aren't included in CBO's score, which exclusively considers the reconciliation package in isolation. The planned additional steps involve the HHS Secretary taking advantage of the broad powers ascribed to him under Obamacare to reduce federal mandates and create more flexibility for states, as well as the introduction of additional legislation promoting cost-reducing mechanisms such as selling plans across state lines and medical malpractice reforms. Sen. Tom Cotton appeared on Hugh Hewitt's show Tuesday morning to pooh-pooh the "three phases" approach as a political fairy tale. He claimed that Sec. Price's executive regulatory maneuvers might get halted by courts (not his strongest argument), and that subsequent bills that would be subject to a filibuster under Senate rules have no chance of passing.  Is that true?  Definitely possible, but Allahpundit isn't so sure:

Step one...needs to be done exclusively through reconciliation. There are 52 votes for that in the Senate at best. But … what if Republicans get it through? Will Manchin continue his rejectionist stance once ObamaCare has in fact been successfully replaced? The GOP will sell step three to the public as the linchpin of their strategy for lowering premiums: The more options you have in choosing a plan, the more likely it is you’ll find one at a price you’re comfortable with. What incentive does Manchin or McCaskill or Jon Tester or Heidi Heitkamp, etc, have to oppose a bill like that once the initial battle over O-Care has been lost? The Republican gamble here is that red-state Democrats secretly do want to work with them to make health insurance better, if only to protect themselves in their 2018 elections. The politics make that impossible so long as ObamaCare is on the chopping block, but once it’s been chopped and the GOP moves on to secondary reforms of the market, there’ll be less pressure on them to toe the party line. And if that’s true, then Cotton is wrong.

Granted, that's a big "if."  But all in all, Republicans can cheer reduced spending, reduced taxes and reduced deficits, and plausibly promise even lower premiums than CBO has anticipated due to being confined to reviewing just one step in the process.  Those are some political legs to stand on.  Many voters are likely to be worried by the projections of millions losing their coverage under the Republican proposal, however.  That's a political reality.  Avik Roy, a conservative healthcare wonk who supports much of the AHCA's framework while promoting changes to help lower income consumers with more generous tax credits, examined how CBO came up with its "reduced coverage" figures.  It turns out that only a fraction of the frequently-cited 24 million statistic applies to people who would actually lose Obamacare marketplace-purchased coverage that they currently have (Republicans would argue that many of these people would have new, cheaper plans from which to choose). Much of that lofty number arises from people that CBO expects would sign up for coverage in the coming years if the individual mandate remained in place.  Roy writes that this isn't credible or supportable in light of these consumers' refusal to comply with the mandate tax thus far, arguing that CBO continues to make the same error that contributed to their wildly inaccurate enrollment forecasts -- namely, vastly overestimating the efficacy and real-world impact of the individual mandate on people's behavior and choices.  And "vast overestimation" isn't an overstatement: 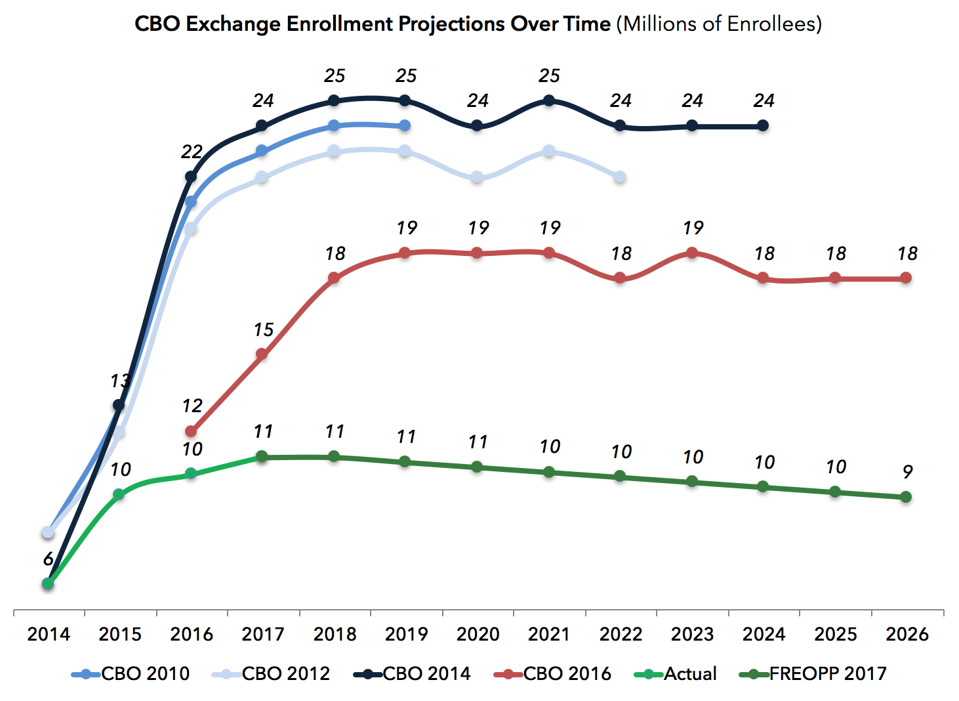 Roy goes on to write that additional millions within that '24 million' top line number come from anticipated reductions in Medicaid enrollees, which lies on a number of faulty assumptions:

Of the 14 million accounted for in the 2018 figure, 6 million would drop out of the individual market, 5 million from Medicaid, and 2 million from employer-based coverage. Remember that Medicaid is basically free to the eligible enrollee. There are no premiums, and almost no co-pays or deductibles. The value of the Obamacare Medicaid subsidy is about $6,000 per enrollee per year. And yet, CBO believes that 5 million people will only enroll in Medicaid because the individual mandate forces them to. Given the difficulties in enforcing the mandate for low-income populations, this is highly unlikely...Furthermore, CBO’s view that 6 million people in 2018 will be driven to enroll by the mandate means that of the 26 million 2018 enrollees in the individual market, nearly a quarter will be signing up primarily because of the mandate. That contradicts the real-world experience of insurers and actuaries, who say that the real proportion is closer to 5 percent.

A key part of the CBO’s March 2016 baseline is an assumption that most of the states that have yet to expand Medicaid under Obamacare will soon do so. Hence, the House GOP plan will reduce coverage by 5 million people in the future, from states that have yet to expand Medicaid...[But] the states that haven’t expanded Medicaid have done so because they are concerned about exposing their taxpayers to significant and growing liabilities that the federal government may back away from over time. Those liabilities aren’t getting smaller as time goes forward, but larger.

Under his calculations, which he explains in detail here, Roy estimates that the CBO forecast could be off by as much as 19 million people: "Add all that up —- seven million off on future exchange enrollment, around nine million off on the individual mandate’s power, and three million off on future Medicaid expansions—the CBO’s estimate of the impact of the AHCA on coverage is off by 19 million, and that the real impact of the AHCA on coverage is negative five million," he writes. That five million number is roughly equivalent to the number of Americans who were kicked off their existing plans under Obamacare, in violation of a central presidential promise. Roy suggests that even this relatively low number could be further reduced by altering the proposed tax credit allotment system, a step also endorsed by conservative healthcare expert James Capretta.  One of the concerns I've been focusing on in my critiques of the existing legislation is that I'm not persuaded that GOPCare would rectify the serious adverse selection/risk pool problem that Obamacare has exacerbated.  If the new solution doesn't reverse the trend of older and sicker risk pools driving insurers away from the individual market, it will fail.  Anthem's sunny outlook about Republicans' plan is a positive sign, but it's not dispositive.  Most right-leaning wonks seem to strongly agree that this remains an issue, which led Capretta to suggest another important adjustment to the mechanisms we discussed at some length last week:

The AHCA penalty imposed on persons who experience a break in their insurance enrollment of more than two months in the prior year would be a 30 percent premium surcharge payable for 12 months. For a plan costing $6,000 a year, that amounts to a surcharge of $150 a month. Healthy consumers are likely to take their chances, saving that $6,000 in the hope that they would not incur significant medical expenses during the year. With the repeal of the individual mandate, and the retention of the ACA’s insurance rules, the overall effect would be significant market turbulence, starting immediately in 2017. To avoid a complete collapse of the market, the AHCA should provide a strong and clear penalty for persons who exit the market, covering multiple years. One approach would be to extend the current surcharge over several years. Another possibility would be to impose a waiting period before benefits would be paid.

So, what now?  President Trump is reportedly courting conservative votes by entertaining changes to the bill that would please the party's right flank.  (While we're on that subject, you should read Philip Klein's piece making the case that the CBO score means that the GOP has little to lose by scrapping much of their current proposal and embracing more aggressively free-market reforms).  But making the bill less generous and more fiscally conservative risks alienating moderates in the party who are already jittery about the CBO's verdict on coverage rates.  Those members' votes will also be critical to passing a compromise bill, particularly in the Senate.  Perhaps House Republicans should make a few needed tweaks to the bill in both directions (say, freezing new Medicaid expansion enrollments a year earlier and adding work requirements to satisfy conservatives, while offering more help to lower-income consumers and delaying the individual mandate repeal by an extra year to reassure centrists), then pass and send that compromise over to the Senate -- which will have ample opportunity to amend it further.

If the fixes I just mentioned in that parenthetical can't be adopted in the House-run process, maybe the Senate can implement them down the hall.  All of this, however, requires Republicans of varying ideological stripes to unify behind an overall framework, vote to advance it, then make good-faith alterations geared toward sound policy outcomes.  This will mean that not everyone will love the final product.  But it would be better than the current iteration of the proposal, and certainly better than failing, unpopular, harmful, deteriorating status quo being imposed by Obamacare. I'll leave you with this fair-minded assessment of CBO's efforts to score complicated bills like this one: