A Tale of Two 'Bombshells:' Why Feeding Frenzies Can Undermine Media Credibility 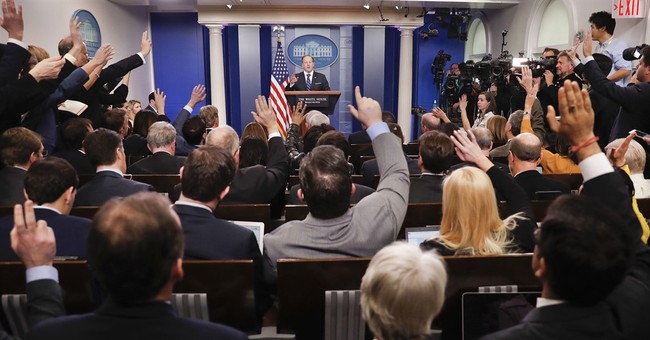 The frenetic pace of recent news cycles is disorienting -- with a barrage of fresh, seemingly-meaningful scoops dropping constantly. The press smells blood in the water. They're piling on the Trump administration, quoting an endless chain of anonymous sources and leakers to construct a narrative of a chaos-consumed White House on the verge of collapse, under the weight of scandal and ineptitude. Some of that perception is deserved and firmly grounded in reality. But other stories garnering a lot of attention and social media amplification smack of overreach and 'me-too-ism,' wherein reporters and news organizations rush out content that intensifies the cacophony of mayhem without adding any real news value. Schadenfreude-addicted Trump critics latch on to every negative bulletin with glee, celebrating each contribution to what they hope is the president's political demise. Conspiratorial Trump supporters reject all unhelpful reporting as "fake news," convinced that a coordinated effort is afoot to take down an innocent leader. In the endless churn of anger and dramatic pronouncements, several pillars of responsible journalism feel diminished: Context, perspective and circumspection.

I am by no means a perfect actor when it comes to making these prudential judgments, especially in this tempestuous climate. But I do strive to thoughtfully separate what matters from what doesn't, and to distinguish between genuine bombshells and frivolous footnotes. Over the last two weeks alone, we've seen (a) President Trump dismiss FBI Director James Comey, (b) reports of the president's legal but highly controversial disclosure of extremely sensitive Israeli intelligence to Russian officials, (c) serious allegations that Trump sought to influence the FBI investigation into a former top adviser and campaign supporter, and (d) the Assistant Attorney General's surprise announcement of a (universally respected, thankfully) Special Counsel to oversee the continuation and conclusion of the DOJ's probe into Russia's election meddling.  These are all significant news developments that merit serious coverage.  But we've also seen (1) network anchors offering breathless editorial declarations that are not supported by available facts, (2) promiscuously-shared absurdities dressed up as important revelations, and (3) mainstream media figures using dishonestly imprecise language that propagates actual  conspiracy theories:

Russia hacked the election. Trump downplays it so it doesn't detract from his legitimacy. Defiant, he embraces Russia diplomatically 1/2


It sometimes feels as if the media is working against itself.  Some news professionals are doing essential, responsible work, while others are recklessly injecting nonsense into the national discussion.  Feeding frenzies attract clicks and ratings, and they're especially enjoyable when the target is someone who's widely despised by the country's taste-making media elites.  But they don't often make for responsible journalism.  Consider two stories that broke within the past 24 hours.  Last night, the New York Times and McClatchy reported that the Trump White House hired Gen. Michael Flynn as National Security Adviser despite being aware of an active federal investigation into Flynn's undisclosed payments from a foreign government -- and that in his powerful role, Flynn forestalled a US-backed military action opposed by that foreign government.  The Times:

Michael T. Flynn told President Trump’s transition team weeks before the inauguration that he was under federal investigation for secretly working as a paid lobbyist for Turkey during the campaign, according to two people familiar with the case. Despite this warning, which came about a month after the Justice Department notified Mr. Flynn of the inquiry, Mr. Trump made Mr. Flynn his national security adviser. The job gave Mr. Flynn access to the president and nearly every secret held by American intelligence agencies. Mr. Flynn’s disclosure, on Jan. 4, was first made to the transition team’s chief lawyer, Donald F. McGahn II, who is now the White House counsel. That conversation, and another one two days later between Mr. Flynn’s lawyer and transition lawyers, shows that the Trump team knew about the investigation of Mr. Flynn far earlier than has been previously reported...When he was hired by Mr. Alptekin, Mr. Flynn did not register as a foreign agent, as required by law when an American represents the interests of a foreign government. Only in March did he file a retroactive registration with the Justice Department because his lawyer, Robert K. Kelner, said that “the engagement could be construed to have principally benefited the Republic of Turkey.” Trump campaign officials first became aware of a problem with Mr. Flynn’s business dealings in early November. On Nov. 8, the day of the election, Mr. Flynn wrote an op-ed in The Hill that advocated improved relations between Turkey and the United States and called Mr. Gulen “a shady Islamic mullah”...The Justice Department also took notice.

One of the Trump administration’s first decisions about the fight against the Islamic State was made by Michael Flynn weeks before he was fired – and it conformed to the wishes of Turkey, whose interests, unbeknownst to anyone in Washington, he’d been paid more than $500,000 to represent. The decision came 10 days before Donald Trump had been sworn in as president, in a conversation with President Barack Obama’s national security adviser, Susan Rice, who had explained the Pentagon’s plan to retake the Islamic State’s de facto capital of Raqqa with Syrian Kurdish forces whom the Pentagon considered the U.S.’s most effective military partners. Obama’s national security team had decided to ask for Trump’s sign-off, since the plan would all but certainly be executed after Trump had become president. Flynn didn’t hesitate. According to timelines distributed by members of Congress in the weeks since, Flynn told Rice to hold off, a move that would delay the military operation for months. If Flynn explained his answer, that’s not recorded, and it’s not known whether he consulted anyone else on the transition team before rendering his verdict. But his position was consistent with the wishes of Turkey, which had long opposed the United States partnering with the Kurdish forces – and which was his undeclared client.

These are bona fide stories that help explain why Trump's fired NSA could very well be in legal hot water (remember, Trump's alleged intervention with Comey on Flynn's behalf appears to be connected to this case, not the Russia probe). The circumstances of Flynn's hiring are baffling. The president installed him in a position of immense power and access despite knowing (belatedly, but before the administration took office) that he'd failed to make critical financial disclosures about being a foreign agent? And in spite of the knowledge that the feds were sniffing around? Couple those apparent facts with Trump's decision to sack him for lying to the Vice President regarding his Russia contacts, and this looks like an insanely irresponsible hiring decision.

That does reflect quite poorly on Trump's judgment, especially as a man who campaigned on the theory that experience is less important than impeccable judgment and world-class managerial skills. The added revelation that Flynn was arguably doing his previously-undisclosed foreign client's bidding while on the job is appalling -- even if there's no direct causal line drawn between those two dots. The appearance of impropriety is overwhelming. (By the way, Trump still apparently loves the guy, to the point of ignoring his lawyers' advice and reaching out to him directly while the scandal swirls). In other words, the Flynn saga is real, relevant, important news. But a few hours later, Twitter erupted with this blazing headline from Reuters:


Given the factually-unsupported "collusion" storyline in the bloodstream, this news flash might serve as new proof that there really is some "there there" -- a belief in which many Americans are deeply invested.  Down in the sixth paragraph of the story, we get this:

Michael Flynn and other advisers to Donald Trump’s campaign were in contact with Russian officials and others with Kremlin ties in at least 18 calls and emails during the last seven months of the 2016 presidential race, current and former U.S. officials familiar with the exchanges told Reuters...Conversations between Flynn and Kislyak accelerated after the Nov. 8 vote as the two discussed establishing a back channel for communication between Trump and Russian President Vladimir Putin that could bypass the U.S. national security bureaucracy, which both sides considered hostile to improved relations, four current U.S. officials said. In January, the Trump White House initially denied any contacts with Russian officials during the 2016 campaign. The White House and advisers to the campaign have since confirmed four meetings between Kislyak and Trump advisers during that time. The people who described the contacts to Reuters said they had seen no evidence of wrongdoing or collusion between the campaign and Russia in the communications reviewed so far. But the disclosure could increase the pressure on Trump and his aides to provide the FBI and Congress with a full account of interactions with Russian officials and others with links to the Kremlin during and immediately after the 2016 election.

"No evidence of wrongdoing or collusion."  So what we seem to have here is a presidential campaign and transition team reaching out to a foreign power with whom Trump was openly and publicly promising to improve relations.  I think that unlike the Obama administration, Mitt Romney saw the Kremlin clearly; the Russians are not our friends, and Trump's welcoming posture toward a man like Putin has been a concern.  But it wasn't a secret, as opposed to this accidentally-recorded exchange.  The fact that figures in Trumpworld were sporadically contacting Russian officials -- or seeking to establish a back-channel dialogue once Trump was elected -- is not sinister or nefarious.  Wrongdoing and collusion would be a scandal; that these newly-public communications offer evidence of neither should have been in the lede, not buried.  Instead, a salacious-looking headline was spread far and wide, fueling a damaging impression.  And the media wonders why attacks against their credibility so often find a receptive audience with such a large segment of the American people.