Sigh: Here's Why WaPo's 'Kevin McCarthy Once Said Trump Was On Putin's Payroll!' Scoop is Dumb 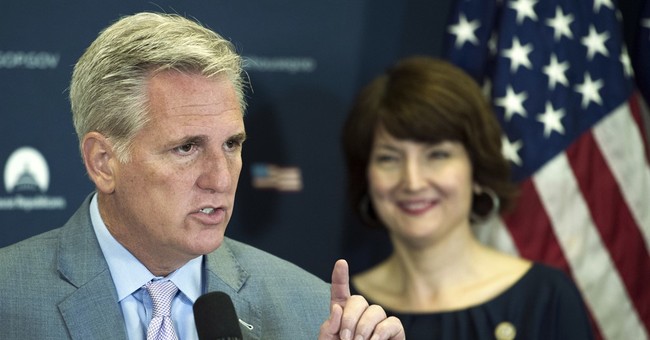 In a week of significant bombshells dropping every evening, this one is a dud. The Washington Post has obtained a recording of House Majority Leader Kevin McCarthy telling colleagues last year that he believed Donald Trump -- by then the presumptive GOP presidential nominee -- was on the payroll of Russian President Vladimir Putin. The Post calls it an "explosive assertion," but is that a remotely fair characterization? Color me highly skeptical. Buried deep in the story is a transcript of the exchange, which reads very much like joking banter, replete with multiple references to laughter:

Three mentions of laughter in a very short passage. So maybe not a super-serious "bombshell" allegation? pic.twitter.com/29uLpdn7Xh


Liberals who pounced on this story seem especially invested in two details: First, that a spokesman for Paul Ryan "lied" by denying that the conversation had ever taken place, only reversing course after he was told there was a recording of it.  And second, that Ryan urged his colleagues not to leak that nugget after the laughter subsided. Obvious explanations for both immediately spring to mind. For instance, perhaps a Congressional aide might forget about a fleeting chuckle-fest, and would instinctively deny that the House Majority Leader had seriously alleged that Trump is a Russian agent.  Ding, ding, ding:

Goodness, I don’t lie. Period. What was presented to me originally was far different than what they ultimately presented: an obvious joke.


Gee, and why might Paul Ryan have admonished members that the joke had been made in an off-the-record setting (drawing additional laughter)? Perhaps because he knew that the GOP was already going to struggle to heal over Trump's nomination, and that an out-of-context leak about a Republican leader "attacking" Trump could be blown out of proportion by an unserious and hysterical media. It would seem as though the Speaker's concerns were justified, wouldn't it?  Here's NBC News grilling McCarthy, who seems bemused and incredulous that this is even a real thing:

Kevin McCarthy to NBC News on @washingtonpost story: “Don't you have a sense of humor anymore? People aren't supposed to be able to laugh?” pic.twitter.com/ff7606Qtal


The transcript mentions multiple rounds of laughter as the back-and-forth unfolds. The Post's reporters say they listened to and verified the tape, so I'll leave you with a crazy idea: How about releasing it to the public so we can judge the tone and context for ourselves, rather than being breathlessly informed about "explosive assertions"?  C'mon.  There's lots of real news this week, guys.  Cover it.

That whole "Putin pays Trump" thing.
Obviously a joke.
Media needs to get a grip. pic.twitter.com/I6ElWqvrQi