Analysis: If True, Trump's Reported Intel Spill to Russian Officials is Alarming, But Not Illegal 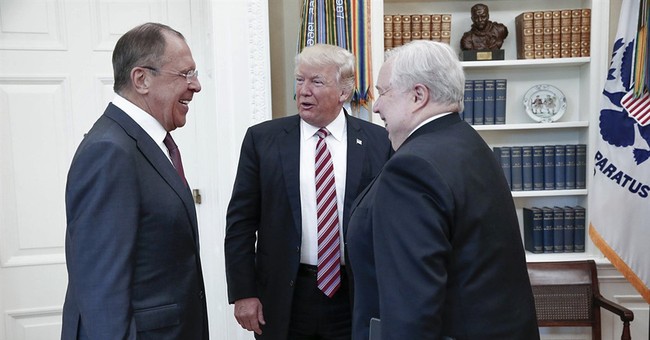 In case you missed it last evening, the Washington Post published a major story about President Trump reportedly revealing extremely classified intelligence in a meeting with Russian officials in the Oval Office last week -- which occurred the day after the president ignited a national firestorm by firing FBI Director James Comey.  We'll get to the White House's response in a moment, but the Post's lede almost reads like the sort of nightmare scenario that a Trump-skeptical hawk might have offered during the campaign to illustrate why even many Republican-aligned national security professionals harbored grave concerns about Trump's fitness for the job:

President Trump revealed highly classified information to the Russian foreign minister and ambassador in a White House meeting last week, according to current and former U.S. officials, who said Trump’s disclosures jeopardized a critical source of intelligence on the Islamic State. The information the president relayed had been provided by a U.S. partner through an intelligence-sharing arrangement considered so sensitive that details have been withheld from allies and tightly restricted even within the U.S. government, officials said. The partner had not given the United States permission to share the material with Russia, and officials said Trump’s decision to do so endangers cooperation from an ally that has access to the inner workings of the Islamic State. After Trump’s meeting, senior White House officials took steps to contain the damage, placing calls to the CIA and the National Security Agency. “This is code-word information,” said a U.S. official familiar with the matter, using terminology that refers to one of the highest classification levels used by American spy agencies.

Trump “revealed more information to the Russian ambassador than we have shared with our own allies"...[he] went off script and began describing details of an Islamic State terrorist threat related to the use of laptop computers on aircraft...Trump went on to discuss aspects of the threat that the United States learned only through the espionage capabilities of a key partner. He did not reveal the specific intelligence-gathering method, but he described how the Islamic State was pursuing elements of a specific plot and how much harm such an attack could cause under varying circumstances. Most alarmingly, officials said, Trump revealed the city in the Islamic State’s territory where the U.S. intelligence partner detected the threat.

If true, this isn't a minor blip. It's the president abruptly revealing highly sensitive material, gleaned from a very sensitive foreign intelligence source, regarding a serious ISIS threat -- about which we've kept even close allies in the dark thus far. But if Trump didn't get into specifics, how could this really be a big deal? The Post's (anonymous) national security sources offer several points on this score:


The identification of the location was seen as particularly problematic, officials said, because Russia could use that detail to help identify the U.S. ally or intelligence capability involved. Officials said the capability could be useful for other purposes, possibly providing intelligence on Russia’s presence in Syria. Moscow would be keenly interested in identifying that source and perhaps disrupting it. Russia and the United States both regard the Islamic State as an enemy and share limited information about terrorist threats. But the two nations have competing agendas in Syria, where Moscow has deployed military assets and personnel to support President Bashar al-Assad. “Russia could identify our sources or techniques,” the senior U.S. official said...At a more fundamental level, the information wasn’t the United States’ to provide to others. Under the rules of espionage, governments — and even individual agencies — are given significant control over whether and how the information they gather is disseminated, even after it has been shared. Violating that practice undercuts trust considered essential to sharing secrets.

Trump may have alerted Russia to the existence of an intelligence stream of which they were previously unaware (see the NBC reporting below for a possible counterpoint), and that they might perceive as a threat to them on issues unrelated to this specific ISIS-related plot. That development could compromise our specific intelligence source, and also risks straining our relationship with the foreign power than originally gathered and shared the information (this story from January started making the rounds on social media last night as people began to speculate about which US partner might be involved here).  It's also worth highlighting that WaPo's piece includes an important distinction about the legality of Trump's alleged disclosure, as well as a carefully-worded quasi-denial from National Security Adviser H.R. McMaster:


For almost anyone in government, discussing such matters with an adversary would be illegal. As president, Trump has broad authority to declassify government secrets, making it unlikely that his disclosures broke the law. “The president and the foreign minister reviewed common threats from terrorist organizations to include threats to aviation,” said H.R. McMaster, the national security adviser, who participated in the meeting. “At no time were any intelligence sources or methods discussed, and no military operations were disclosed that were not already known publicly.” The CIA declined to comment, and the NSA did not respond to requests for comment. But officials expressed concern about Trump’s handling of sensitive information as well as his grasp of the potential consequences. Exposure of an intelligence stream that has provided critical insight into the Islamic State, they said, could hinder the United States’ and its allies’ ability to detect future threats.

Some of the rapid-fire reaction to the publication of this story harkened back to Hillary Clinton's email scandal, in which the former Secretary of State jeopardized the contents of thousands of classified emails by deliberately failing to abide by protocols for transmitting such information.  This conduct constituted a crime under the Espionage Act, due to her gross negligence.  Fired FBI Director James Comey chose not to recommend charges to DOJ because he says he couldn't prove criminal intent -- despite the fact that the statue doesn't require intent, and her multiple "false exculpatory statements" pertaining to her highly improper email scheme demonstrated intent.  Regardless, on a strictly legal basis, comparisons between Clinton's apparent crimes and Trump's reported actions fail because as president, he has "broad authority" to declassify whatever he sees fit.  So this is technically correct:

.@SenatorRisch defends Trump revealing classified info to the Russians: "It's no longer classified the minute he utters it."


The more serious issue is the president's judgment and core competence (conspiracies about "treasonous" Trump handing over state secrets to Russia are ridiculous), which is why this is the more appropriate reaction, in my view:


Officials quoted in the report openly raise doubts about whether the president understands the complexities and sensitivities of intelligence-gathering, noting that some of his top aides almost immediately scrambled to limit the damage after the meeting.  That's not good news.  As for McMaster's on-the-record response, the Weekly Standard's Stephen Hayes -- who is deeply sourced within the intelligence community -- explains why it may not be sufficient:

Discussing sources/methods is not necessary to compromise them. Often the intel itself makes clear source/method. https://t.co/qBaLsrerDa

Fmr senior intel official to TWS: "sharing of another country's intel w/o permission is one of the brightest red lines in the intel world."


For what it's worth, Buzzfeed's sources say the subject of the scoop is actually worse than the initial report would suggest. And before conservatives launch into into media criticism or whataboutism (yes, there are many bad things that the Obama administration did), let's be clear: Trump is now the president. He won the election. He is the commander-in-chief. At some point, and especially on certain matters, his conduct must be judged on the merits -- not graded on a newcomer curve, or compared to other (real or hypothetical) objectionable decisions made by his predecessor or his 2016 opponent. Meanwhile, feel free to click through to the Post's inevitable companion piece reminding readers of the many times candidate Trump expressed concern about the handling and dissemination of American secrets while attacking Mrs. Clinton on the campaign trail.  I'll leave you with McMaster's more assertive denial in front of the cameras:


As other news outlets lined up to confirm WaPo's reporting, Allahpundit described the McMaster/Tillerson line as a non-denial denial: "The charge is that Trump revealed a detail about location that would let the Russians figure out how a U.S. ally was getting its information on ISIS. He didn’t reveal who the source was or how that info was obtained and WaPo isn’t claiming that he did. But what he did was bad enough...[McMaster] still emphasizing disclosing 'sources and methods,' though, which WaPo didn’t accuse Trump of. They accused him of sharing 'highly classified information.'”  In other words, the administration is denying X, when the issue at hand is whether the president did Y.  As far as analysis goes, based on available information, Jonah Goldberg's NRO post is solid. Perhaps we'll learn more at today's White House press briefing, at which McMaster will face the media. Also, here's additional reporting from NBC that may or may not mitigate the situation:


UPDATE - Trump's tweets this morning strongly suggest that the Washington Post story isn't pure "fake news," as some of his defenders claimed yesterday. He says that he did share intelligence on ISIS with the Russians to help them and to encourage them to step up their efforts against the terror army. This does not directly contradict the statements from McMaster and Tillerson -- nor is it an "admission" that the WaPo report is fully accurate, as some in the media are crowing. But it also doesn't swat down the central concern here, which is that Trump may have compromised an intelligence stream and unintentionally betrayed a partner by giving the Russians certain classified details. Much of the debate over these allegations against Trump, and his administration's push-back, seems to be muddied by people arguing over different things and talking past each other.